Reaching the goal of putting every teacher and student on an Internet device, and making sure it can actually connect to the Internet, will require a major financial investment: Billions of dollars, experts say.

“When you look at how much is spent on technology in education as opposed to every other field, it’s minuscule,” said Karen Billings, vice president of the education division at the Software & Information Industry Association (SIIA), a member organization for software companies. 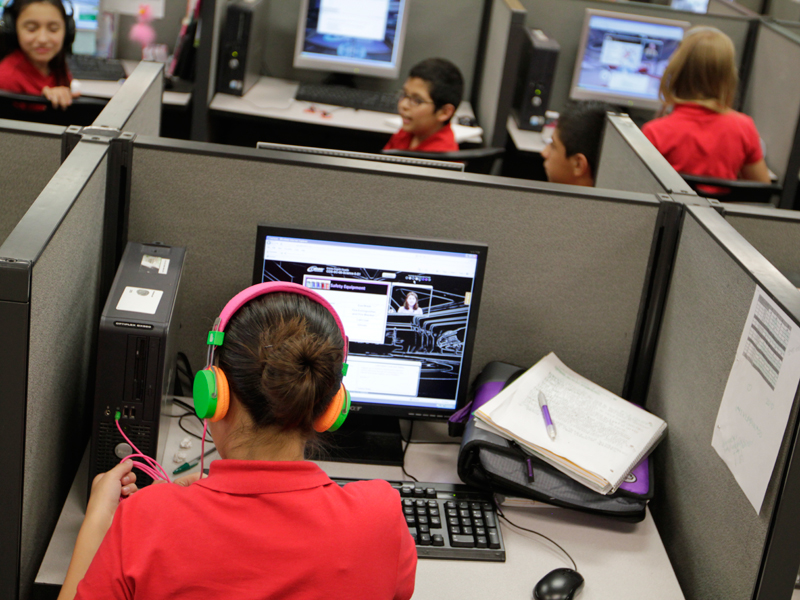 For the districts most in need – high-poverty urban and rural districts – catching up will likely require significant help from the federal government because their budgets tend to rely more on federal funding than on state aid and local property taxes. But given the strain on school budgets in recent years, experts say middle-income districts also need help to reach federal goals for Internet speed and the deployment of computers.

“Bandwidth usage in schools today is growing 50 percent a year, and you can easily see how this is going to go up and up,” said Evan Marwell, CEO of Education Superhighway. “The gap is really big.”

In recent years, getting that help has been more difficult. Most federal funding for schools has stayed flat, and one major funding stream specifically intended to boost education technology, the $700 million Title II-D Enhancing Education through Technology program, was eliminated.

That’s why the Obama administration recently pushed for changes to the Federal Communication Commission’s $2.3 billion E-rate program, which subsidizes telecommunications spending by schools and libraries.

Digital education may be the future, but most American schools are far from ready. Our series examines the national effort to close the digital divide by connecting all American schools to high-speed Internet, and why so many schools still lag so far behind.

The Promise: Digital education is supposed to transform public education, but many schools can’t even get online

The Problem: Instead of getting ready for the tech revolution, schools are scaling back

The Solution: How can schools close the technology gap and how much will it cost?

E-rate won’t receive new funding for now, though. Instead, the FCC is reorganizing how the money is spent to “improve the program’s efficiency, functionality, and our oversight,” the FCC chairman, Tom Wheeler, has written. Money that previously went to pay for phone service, dial-up Internet, and outdated technology like pagers will be rerouted to pay for broadband instead.

Still, the shift won’t happen right away. “Even at lightning speed in government — which is how they’re moving — that will still be a couple years out,” Culatta said.

And technology advocates question whether the new E-rate money that will go toward broadband is enough to close the major gaps. The changes to the E-rate “will make a major dent in meeting today’s goal,” Marwell said. “But that alone will not be sufficient to meet the president’s goal.”

Schools rely on E-rate for broadband, but also for the internal systems — the installation and maintenance of wireless routers, wiring and other equipment — that connects classrooms to the network. E-rate puts a priority on broadband, however. According to Marwell, the high demand for broadband means there will be little leftover for those internal networks that make it possible for schools to hook up classrooms.

“Most schools — not the richest schools — without money from E-rate do not have the funding to put in modern Wi-Fi networks,” Marwell said. “We’ve got this ever widening gap between rich districts who can afford this stuff without the FCC’s help, and middle and poor districts who can’t.”

A survey of 469 school districts by the Consortium for School Networking (CoSN) found that only 2.3 percent of responding districts had wireless, compared to a quarter with slower copper connections. Of those surveyed, 93 percent said the current E-rate funding didn’t fully meet their needs. Eighteen percent said they’d applied for money to fund internal systems and were rejected. Thirty-seven percent said they didn’t bother, although they needed the money.

Taking money away from phone services to pay for broadband could also pose problems, according to the CoSN report. More than a quarter of districts in the CoSN survey use half of their E-Rate funding to pay for their telephones. “The fiscal harm to districts could be great if basic telephone service were deemed a non-allowable expense under the E-rate,” the report said.

Bob Wise, president of the Alliance for Excellent Education, calls the changes to E-rate “a down payment.”

“It will meet some of the demand, but it will by no means meet all of it,” he said. “We’re going to have to come to grips with how we’re going to pay for the continued expansion”

Adding to E-rate’s funding stream is likely out of the question because of the gridlock in Congress. So Culatta says solutions will need to come from outside of government, too.

“This is not just a government thing. This is a thing where a lot of people have to step up from lots of levels,” he said.

Culatta said the administration has secured $1.25 billion in commitments from the private sector to help lower costs for school districts. Experts also say districts will save money as computers, tablets and other devices drop in cost. And the White House is also pushing districts to join together to buy equipment in volume to push prices down further.

Marwell says broadband costs also need to be evened out. “The median school today pays $25 per megabit per month for their bandwidth,” he said. “That’s like you paying $500 a month for your Internet service.” For many schools, the price is even higher. A quarter of districts pay more than $100 per megabit a month, Marwell said, and the CoSN survey found that rural schools paid six times more for broadband than schools in suburbs and cities.

“If we redirect money and lower the cost, then we have a formula to get the bandwidth to schools today,” he said.

But solving the hardware problems by getting the broadband and devices to schools is just the first step in closing the technology gap. Once schools are wired and teachers and students have devices in hand, next they have to learn how to use them effectively.

“There are things we do really well in the U.S.,” he added. “The challenge is how do we leverage the technology.”