WASHINGTON, D.C. — The annual meeting of the National Association of Independent Colleges and Universities this year had the tone of a revival meeting.

“We have been under steady, unrelenting pressure,” declared the organization’s president, David Warren, who spoke of “an overreaching executive branch” he said sought to use unreliable statistics to measure the effectiveness of higher-education institutions that are vastly different from each other.

Warren was talking about proposed ratings of colleges and universities the White House says would help consumers see what they’re getting for their tuition dollars. He said these would fail to capture “the specific mission of an institution at whose core is where value can be found.”

Then the tall, silver-haired former Ohio Wesleyan University president with a booming voice and a divinity degree from Yale dispatched his congregation out into a drizzle and toward the mist-shrouded U.S. Capitol, a few blocks away, to deliver the same message to their congressional representatives.

“Tell your story to your member of Congress, why this is an ill-conceived notion,” Warren charged them. “No congressman wants an ugly rating for an institution in his district.”

It was a rare glimpse at a lobbying operation that even its critics say has been as effective as it is little known: the one that represents the interests of American colleges and universities.

“Big Higher Education,” one calls it, in a comparison to the lobbyists who safeguard the political interests of Big Oil and Big Banking.

“The higher-education lobby is doing what lobbyists do, which is protecting its members,” said Art Rothkopf, a Washington lawyer and a former president of Lafayette College. “It’s no different from the automakers’ lobby, the big pharmaceutical companies. There’s a lot of money involved.”

Nearly $200 billion a year in federal funding, to be exact, in the form of financial aid, tax breaks, and grants for research and development and other purposes.

It’s a vast sum that speaks to the longstanding success of the Big Six, as the principal Washington-based associations of colleges and universities are known.

But questions about the return on that investment are pushing Big Higher Education into the unaccustomed spotlight.

“There are more dollars at stake, and congresspeople are starting to say they want to tie some strings to them,” said Amy Laitinen, deputy director for Higher Education at the New America Foundation.

The higher-education associations, Laitinen said, would prefer that Congress “give them the money and leave them alone and trust them to do their thing. They’re guarding the gates.”

Even as the White House puts more pressure on colleges and universities, foundations such as New America are taking more of a role pushing for reform in higher education, which has previously enjoyed political consensus and support with little public scrutiny.

Representatives of the college and university associations agree that they have had to come up from under the radar.

“The visibility of public policy decisions about higher education policy has increased dramatically, there’s no question about that,” said Terry Hartle, senior vice president for government and public affairs at the biggest, the American Council on Education, or ACE.

But they also say their influence is nowhere near as great as their critics suggest.

“People think of the guy in the raincoat and the cash. They don’t understand what lobbying is. Lobbying is using First Amendment rights to talk to members of Congress,” said Sarah Flanagan, vice president for government relations at the National Association for Independent Colleges and Universities, or NAICU.

“I’m always amused at the descriptions of our enormous power,” Hartle said. “We don’t have PACs, we don’t do fundraisers, we can’t deliver votes. All that colleges and universities have is that they are constituents, and because they tend to be important organizations in the states and congressional districts where they’re based, they will be listened to, but not always.”

He added: “Given what people think of as powerful organizations in this town, higher education doesn’t look like any of them.”

Spending on education lobbying at all levels has risen just as federal spending on higher education has. It’s grown from about $30 million a year in 1998 to $70 million in the presidential election year of 2008 to a peak of $110 million in the congressional midterms of 2010, according to the Center for Responsive Politics. The figures do not include political spending by teachers’ unions.

Education interests spend the eighth most of any industry on lobbying, the Center for Responsive Politics reports.

The associations are based not on K Street, famous home to other Washington lobbies, but in Dupont Circle, orbiting ACE’s headquarters at One Dupont.

They’re like those other lobbies in some ways, though. For one thing, they have hired officials away from the government agencies that regulate them. As one of its top lobbyists, ACE in February brought aboard Dan Madzelan, for instance, former acting assistant secretary for postsecondary education at the Department of Education. 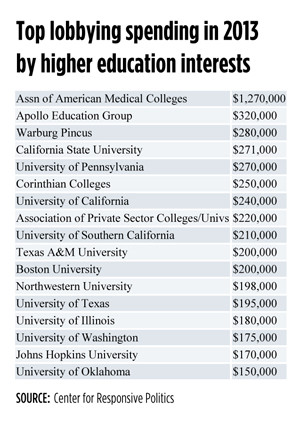 The ratings proposal is what seems to have most galvanized the groups. It calls for making available such things as student debt and graduation rates, by campus.

One of the objections colleges and universities have made to the idea is that federal data about student success isn’t good enough to judge them on, based as it is only on the number of students who enter and the number who earn degrees within a particular time — without counting those who transfer in or out.

That’s because the higher-education lobby in 2008 successfully blocked letting the government track individual students, their opponents angrily retort, which would have provided a much more accurate picture of how many graduate.

Several of the college and university associations said the idea, called student-unit recordkeeping, would violate people’s privacy. They found allies in Congress, which not only failed to approve it, but went out of its way to prohibit it.

“They’re brilliant,” Laitinen said. “Step One, make sure you can’t collect good data. Step Two, complain that the data isn’t good enough to base any policies on. They say it with a straight face. They bemoan the lack of data, but they’re the reason the data is bad.”

Sour grapes, responded Hartle. “The notion that higher ed can just say, ‘We don’t think it’s a good idea,’ and that stops it, is just wrong,” he said. “It’s a convenient argument for people who have not been able to win a policy debate.”

But Rothkopf, the former Lafayette president, who has also served as vice president of the U.S. Chamber of Commerce, said: “The truth is that the associations want all of this to be as opaque as possible. They don’t want you to be able to compare the outcomes of Williams compared to Podunk U. They’d just as soon say, ‘Trust us.’”

If there ever was complete consensus about blocking student-unit recordkeeping, it may be starting to crack. Public universities and community colleges, whose graduation rates will likely look better if they’re tracked more accurately, are now for it.

Colleges and universities are also fighting back against the plan on the grounds that it creates more regulation, and they’ve found particular friends among regulation-averse Republicans, with whom they share something else: unhappiness about the Obama administration, which proposed the ratings.

At their Washington conference — called “Securing Our Futures” — representatives of NAICU colleges and universities gave an award and a sustained standing ovation to Sen. Lamar Alexander of Tennessee, former president of the University of Tennessee and ranking Republican on the Committee on Health, Education, Labor, and Pensions, who told them regulation “wastes much-needed dollars that should be used for students.”

Alexander, along with another Republican and two Democrats, has set up a task force to review higher-education regulation. It’s co-chaired by the chancellors of a university and a state university system, with 14 college and university presidents and higher education experts as members and “organizational assistance” from ACE.

After the senator left with his award, Warren raised one last objection to the White House ratings push. It was an example of the executive branch usurping authority that rests with Congress, he said — a violation of the principle of the separation of powers — and his members should tell their congressmen about that.

A few days later, Republicans Virginia Foxx of North Carolina and John Kline of Minnesota, who chair House committees and subcommittees on education and higher education, respectively, echoed this complaint in a letter to the president blasting his “repeated threats to circumvent Congress” in making higher-education policy.

“It shows how smart they are strategically,” said Laitinen. “What’s going to get Congress fired up? And right now there’s huge tension between the legislative and executive branches, so let’s get them fired up.”

Alexander has since said he plans to attach an amendment to an appropriations bill to black the Education Department from using federal funding “to develop, refine, publish or implement a college ratings system.” And two congressmen, Republican Bob Goodlatte of Virginia and Democrat Michael Capuano of Massachusetts, have separately introduced a bill opposing the ratings plan.

“They’re so good,” Laitinen said of the higher-education groups. “They are incredibly effective lobbyists. But ultimately I don’t think it’s very good for families or students.”