Just how well do students who attend five of the largest, most well-known for-profit schools in the U.S. do when it comes to repaying their loans? The Hechinger Report decided to take a closer look following the release of new federal rules meant to police institutions that critics contend take advantage of poor and unprepared students.

Under the new rules, which go into effect in 2015, if alumni aren’t able to obtain “gainful employment”—jobs that allow them to repay their student loans—institutions can lose their federal aid. To ensure that schools comply, the U.S. Department of Education will track whether students get jobs with salaries high enough to repay their loans.

For-profits have fought the new rules vigorously, arguing that they fill a necessary role by educating students whom other schools won’t take or don’t have room for.

Which institutions meet the bar won’t be known for some time; institutions are required to start collecting relevant data on July 1. But there are other numbers available now that offer a window into how some of the biggest for-profit players may fare.

The new rules are a significant shift from the original proposal, which would have required institutions to demonstrate a 45 percent loan-repayment rate. Also, they apply to programs, not institutions, so a program can lose its eligibility without endangering the entire school.

Below is a chart looking at federal loan repayment rates for Kaplan University, the University of Phoenix, Capella University, ITT Technical Institutes, and DeVry, along with several private and public universities for the sake of comparison.

The loan-repayment rate differs from the criteria the federal government will use, and the data aren’t perfect. However, the rate suggests how these schools might fare when the new rules go into effect. 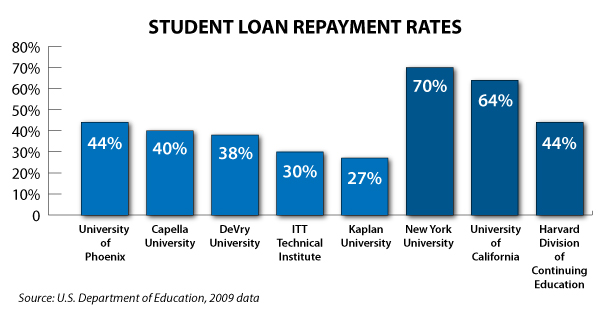 Last fall, when the DOE announced its original proposal, officials noted the following statistic: Students at for-profit institutions represent 11 percent of all higher-education students but 43 percent of all loan-defaulters. At the five for-profit schools we looked at, default rates have risen steadily in recent years:

For many for-profits, losing their federal aid would be devastating, and in many cases would effectively shut them down. Federal law permits up to 90 percent of a higher-education institution’s revenue to come from federal loans and grants, and many for-profits tread closely to this line. 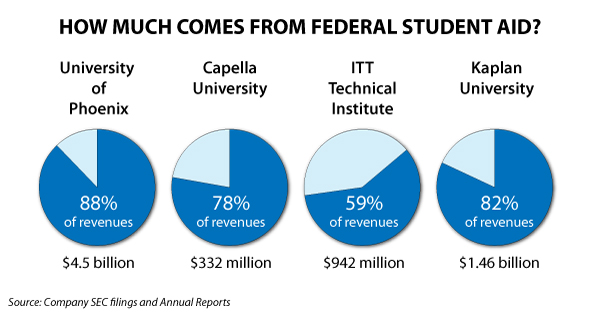 There is good news for for-profits, though. In addition to lowering the percentage of graduates who must be repaying their loans from 45 to 35 percent, the new regulations also lowered the debt-to-income ratio and gave schools more time before the regulations kick in.

Some credit these changes to lobbying efforts by for-profit colleges and their supporters—The New York Times reported that this cost $12 million. Below is a chart that looks at what four of the big for-profit players paid lobbyists in 2010 and the beginning of 2011. (Information for Kaplan University was not available separate from Kaplan, Inc.) This is one instance, though, where for-profits don’t stand out from their public and nonprofit peers.

Lobbying is a relatively small expenditure at for-profits—and, indeed, all institutions. The bulk of their money is spent on instruction and services and administrative costs. For-profits have also come under fire, however, for spending large sums on marketing. Last fall, the U.S. Department of Education introduced rules to stop deceptive advertising among for-profits.