The Hechinger Report is a national nonprofit newsroom that reports on one topic: education. Sign up for our weekly newsletters to get stories like this delivered directly to your inbox.
Rethink Mississippi

Over 35 percent of Mississippi’s children fall under the international poverty standard as defined by this report from the United Nations Children’s Fund (UNICEF). Compare that to 24 percent in Romania, the highest rate in the developed world: 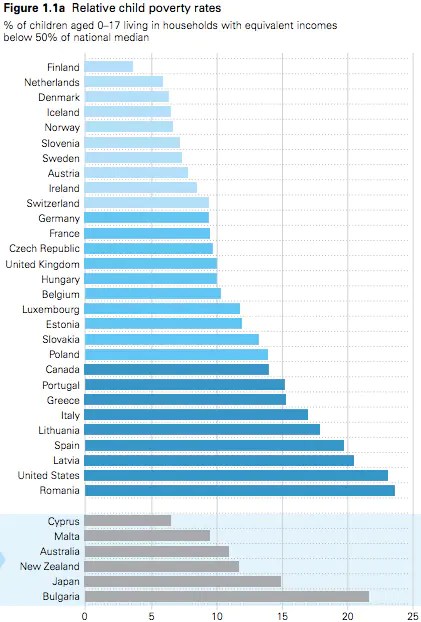 Before we go any further, a caveat: the UNICEF report defines poverty as less than 50 percent of national median household income — a relative measure that doesn’t offer comparisons about absolute well-being across countries. Americans make four times as much as the average Eastern European (and 10-20 times more than the average Sub-Saharan African), so most of Mississippi’s underserved children are materially better off than comparable populations in poorer countries.

Nevertheless, child poverty is best understood in a domestic context because its implications for opportunity and mobility, two foundational ingredients of America’s national identity. Mississippi boasts its share of rags-to-riches stories, from Oprah Winfrey to Elvis Presley to B.B. King. But these cases are — in the most literal sense — exceptional.

Most Mississippians who grow up in the bottom fifth of the income distribution have less than a 5 percent chance of reaching the top fifth in their lifetimes, according to a groundbreaking mobility study by economists at Harvard and UC-Berkeley. Another recent study ranked Mississippi next-to-last among all the states in its definition of “opportunity.”

This isn’t just a matter of poor states having more poor kids. Mississippi’s child poverty rate stands out even among its fellow four states at the bottom of the national household income ranking:

More than one-third of Mississippi’s children have been permanently condemned to society’s bottom rungs. The distressing reality is that our political decisions are to blame. It is widely known that the path out of poverty runs by the schoolhouse, yet Mississippi was among the last states to offer state support for pre-kindergarten for four-year-olds. The state has shortchanged its own “adequate” K-12 funding formula by over $1 billion in the past four years.

The full half of the glass is that the problems facing our children are not intractable. Not coincidentally, the places that invest in children and families are the places with the lowest rates of child poverty.

Other developed countries chose long ago not to tolerate such high levels of need, particularly among children. Pre-tax income inequality is slightly larger in Finland than it is in America. However, under their generous system of redistribution, only one out of 25 kids grows up in the lowest income quartile, compared to nearly one in four in America.

Mississippi’s leaders have no greater responsibility than providing healthy, safe, and enriching conditions for our children. Not only do childhood deprivations pose far-reaching economic consequences, but surely the most basic test of a society’s humanity is how treats its youngest and most vulnerable. Measured against the rest of the developed world, Mississippi is failing miserably.