Mitchel Resnick is the LEGO Papert Professor of Learning Research at the Massachusetts Institute of Technology and the head of the Lifelong Kindergarten group at the MIT Media Lab. His research group is best known for inventing two blockbuster educational technologies: the programmable bricks used in the LEGO Mindstorms robotics kits and Scratch, a computer programming language that allows children to create and share interactive stories, games and animations. The Hechinger Report talked to him about whether technology is changing education for better or worse. 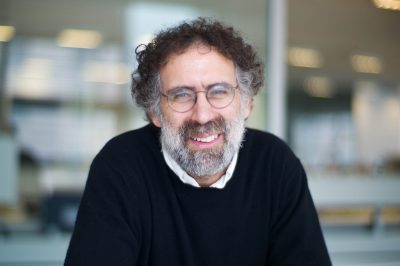 Question: Millions of kids around the world are using your simplified computer programming language, Scratch. I once read that Scratch accounts for 10 percent of all visits to MIT websites. What’s worked and what hasn’t?

Answer:  One of the reasons for Scratch’s success is that it’s really easy to mix together different animations, photographs and graphics. And you can share them in an online community and see what other people have created. In our mind, two of the most important aspects of any learning experience are creating and collaborating.

But the creating and the collaborating were in two separate worlds. You had to download the Scratch software and create on your own computer. Then, when you went online to the Scratch community you would see a project and wonder, “Oh, can I make a little change to that?” You’d have to download it to your local machine, then if you wanted to share it with others, you’d have to upload it to the website. It was frustrating.

In May (2013) we introduced Scratch 2.0, the biggest change since we launched Scratch in 2007. Now you can create inside a web browser. If I like one character in your project, I can just grab that character and bring it into my project. It’s much easier to share and remix.

Q: What ages are using it?

A: Scratch is usually for kids eight years and up. But we’re working on a Scratch Junior version for younger kids, ages five to seven, that will launch next year in 2014. We have a National Science Foundation grant, along with a colleague at Tufts University, Marina Bers, to develop it.

Q:  Do you make money from Scratch and LEGO Mindstorms?

A: Since Scratch is free, my group and I don’t financially benefit from it. I don’t have any financial interest in any LEGO products, but I do serve on the board of LEGO Education, and I receive a stipend for that.

Q: Should every kid learn to program? Or are we in the midst of a senseless computer programming fad in schools?

A: In the last year, there’s been a lot of excitement about learning to code. New York City Mayor Bloomberg made it his New Year’s resolution that he was going to learn to code. The country of Estonia said [it is] going to teach all of its first graders to code.

It’s important for everyone to learn to code in same way that it’s important to learn to write. Coding, like writing, can help you organize your thinking. As people learn to code, they think systematically. They start to identify bugs and problems and fix them in ways that carry over to other activities. You learn basic strategies for solving problems, designing projects and communicating ideas. That will be useful to you even if you don’t grow up to be a programmer, but a journalist or a marketing manager or a community organizer. We sometimes say, it’s not so much about learning to code, but coding to learn. As you code, it’s helping you learn other things.

Q: What are you working on now?

A: I taught an online course this last spring for the first time. I generally haven’t been so excited about the way many people are doing online courses. A lot of the conventional MOOCs (Massive Open Online Courses), for my taste, are focused too much on information delivery. But I figured rather than complaining about it, I should try it and see what I would do.

Along with a couple of colleagues, we created a course called, “Learning creative learning.”  The idea was to help people learn about creative learning environments. It was meant primarily for educators.

We wanted it to be different than a lot of the conventional MOOCs. We tried to see how we could create an online course that focuses more on interacting with peers and working on projects. I wouldn’t say we came up with the perfect online course. But for me, it’s been a great learning experience.

One of the things we really liked about it was that at the end of the course, participants wanted to continue interacting with each other. Although it started as a course, it became a community. In my mind, that’s exactly what I think is best about online interactions – being part of a community.

Q: How many people signed up? And how many completed?

A: Completed is hard to answer. We did not give any type of certification or credits for this course.

That’s another thing that has worried me about online courses. They invest so much energy into credits and ways of assessing, that it takes away from other aspects of the learning experience.

In particular, if you’re going to give credit or some type of online credential for a course, then, of course, you have to do some type of assessment. And if you’re going to do an assessment of a large number of people, it limits the activities that you’re able to assess. It’s easiest to assess things that have yes/no answers, true/false or multiple choice.  We wanted to avoid that. It’s much harder to assess a design project or a written essay.

But to answer your question, something like 25,000 people signed up. But that’s inflated. We spread the word about the course by sending out a few tweets. Then it got covered on some blogs that weren’t so relevant to the course. So lots of people registered and they quickly saw that this wasn’t the right thing for them. About 10,000 people took the step of registering in a Google-plus community that we set up for the class. That’s probably a better measure of who signed up. Some were active participants. A lot of other people were just lurking. In the low thousands participated in some ongoing way.

Q: Will you teach a MOOC again?

A: Yes, we’ll do the course again, probably next spring, but what’s most interesting to us is how to sustain this community. We’ll probably get some members of the community to play some role in the course. We’re now seeing the course as introduction to the community.

Q: What do you think of so-called adaptive learning, where computers tailor instruction for each student?

A:  Clearly there are some advantages at having certain things personalized for you. As long as it’s some options, choices and suggestions, then it’s okay. But I wouldn’t want to be limited only to what a machine suggests for me. If it’s central to my experience, if I’m categorized in a certain way and pushed down a certain path, it could make a much worse experience for me.

The machine could have students avoid things they might have been interested in. If the machine is trying to make a guess, based on how I answered one question, what would be appropriate to show me next, even if you and I answer a question the same way, it could be for different reasons. Even if we make the same mistake on the same question, it might be for different reasons. When a machine tries to make suggestions for you, a lot of time it’s wrong. It can be more frustrating than it’s worth. I personally tend to be somewhat skeptical when the machines try to be too intelligent.

One other caution would be, it’s great to have things that are specialized for me, but it’s also great to be part of a greater community.

I sometimes worry [that] it’s very easy for computers to give feedback these days. It’s seen as this great thing. Students are filling out answers to problem sets and exams. Right away it shows them if they’re right or wrong and they can get feedback right away, which can influence what they do next. Getting feedback is great. I’m all for feedback.

Q: Are you worried about more multiple-choice worksheets in our schools?

A: if that’s the result, then it’s a really bad result.

Q: What do you think of using data to influence instruction? Using big data sets to change how schools teach kids?

A:  To be honest, being at a place like MIT, people here are focused a lot at looking at data and treat data in a very privileged way. I’m often on the side of saying, “Wait a minute. We shouldn’t be designing everything just on the data.” Yes, we should take advantage of the data. But there are other ways of trying to get information as well. For example, if we want to understand how and what children learn, sitting down and talking to one of the students can also be very useful.

Q: Then why are you collecting data on Scratch usage?

A: Now that Scratch is online, we can have access to lots more data about what kids are doing. And that can be useful. If we see that certain of the programming blocks are not used, it might make us wonder, should they even be there? Or is it confusing for some reason? Should we change them to make it less confusing? It could influence our design.

If we want to see, how is it that students start using a certain concepts? When do they start using variables? Are there certain experiences that people have that are more likely to lead into using variables? There are things like that that might change some of our pedagogy.

Looking at the data might change some of our design and some of our pedagogy. But I want to be careful not to make all of our decisions based on that.

(edited for length and clarity)