Anyone with lingering questions from childhood may just find the answers in Ungifted: Intelligence Redefined (2013), Scott Barry Kaufman’s first book. Kaufman, a cognitive psychologist at New York University, begins with a memory of being bullied in the boy’s bathroom at school for having to repeat third grade. 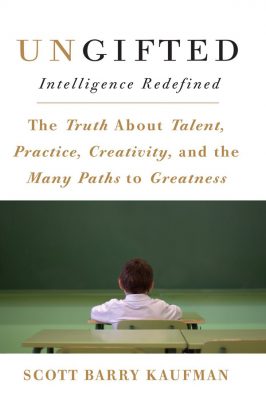 While this book isn’t a tale about peer bullying, it is born out of another form of bullying—having someone impose his or her view of you on you and not letting you be yourself. Through ninth grade, Kaufman was designated as a special-education student despite his firm belief that he wasn’t as mentally handicapped as IQ tests told him he was.

“I was different,” Kaufman writes. “In every way, and at every turn, I seemed out of sync with my peers. I was living in my own head, and consequently people treated me like I was disabled.”

In their purest form, IQ tests are meant to determine a person’s cognitive strengths and weaknesses. But, as Kaufman points out throughout Ungifted—and as the inverse of an old saying goes—your greatest weakness can also be your greatest strength.

Kaufman details the modern history of intelligence testing, dating back to the early 1900s in France. The French government wanted to identify and weed out the mentally “retarded” from mainstream education. By 1905, Alfred Binet—godfather of the modern-day IQ test—had devised an intelligence scale, which was revised multiple times in subsequent years, to determine whether a child had a certain amount of intellectual capacity at that present moment in time.

The problem was that the tests were—and often still are—used to determine a child’s future.

Kaufman writes that in an “era … obsessed with abnormal behavior,” Binet—a self-taught individual, in part because he was a social misfit—came up with a test because he was “fascinated by individual differences,” not because he believed some children had more potential than others.

Like Binet, Kaufman is interested in exploring how—and why—people differ. He wants to see people celebrated for their differences, not cast aside or labeled simply because they don’t fit neatly into one of society’s more manageable categories.

What Kaufman wants us to understand is that IQ, in the traditional way we think about it, provides an incomplete picture of a person’s intelligence. After all, IQ tests don’t measure absolute intelligence, and intelligence isn’t fixed—and yet IQ tests (in the form of the SAT and other standardized tests) are still widely used to predict future academic and professional success.

In a chapter on the g factor—general intelligence, as opposed to IQ—Kaufman quotes Harvard professor Howard Gardner, who pioneered the theory of “multiple intelligences,” from an interview in 1995:

The time has come to broaden our notion of the spectrum of talents. The single most important contribution education can make to a child’s development is to help him towards a field where his talents best suit him … We should spend less time ranking children and more time helping them to identify their natural competencies and gifts, and cultivate those. There are hundreds and hundreds of ways to succeed, and many, many different abilities that will help us get there.

It’s not that Kaufman wants to get rid of intelligence testing altogether. Instead, he advocates a more holistic approach to helping a child reach his or her full potential because predictions—whether bad or good, and whether made by psychologists, early childhood educators or test-makers—can have lingering effects on a child, making it hard for him or her to outgrow those expectations and grow into themselves.

Binet’s IQ test ultimately ended up being used for purposes he never intended, such as weeding out the intellectually “disabled” from the French school system.

In America, IQ tests were used for immigration selection in the early 1900s and, as recently as the early 1960s, for sterilization purposes.

While Kaufman acknowledges that IQ tests do show strong correlations in predicting income, education and occupation levels, he emphasizes that IQ test results aren’t set in stone. He uses himself as an example of someone who proved the experts wrong: he didn’t score well on standardized tests during grade school and repeated third grade, but went on to win a Gates Cambridge Scholarship and complete his doctorate at Yale. With the right kind of intervention and help, anyone is capable of achieving great things, Kaufman says.

Kaufman argues, as Gardner has for decades, that there are many kinds of intelligence, and many ways to acquire it. Traditional IQ tests don’t measure multiple forms of intelligence.

The other key ingredient to success in life is love, Kaufman notes. To be good at something, you must love what you do. Studies show that those who develop a love of learning, for instance, learn more and stay in school longer than those who don’t. The same goes for professions: If you love what you do, you have a greater chance of succeeding—possibly even more so than those who have an innate talent for something but who don’t love it.

Some people get lucky when it comes to the environment into which they are born. Those who aren’t in an environment that values their strengths or nurtures their true nature have a harder time fitting in and becoming successful, but that doesn’t mean they are any less intelligent. It simply means they haven’t yet found—or created—the right environment for themselves.

“I firmly believe we can recognize and value every kind of mind without diminishing the value of others,” Kaufman writes. “We are all capable of extraordinary performance; the key is finding the mode of expression that allows you to create your own unique symphony.”

Kaufman was able to find his own successful path, and with enough passion, persistence, and patience, he claims the rest of us should be able to do the same, whether we are labeled as gifted, ungifted, autistic, schizophrenic, a savant, or have some other mental and/or emotional diagnoses.

While Kaufman doesn’t think the U.S. public school system should get rid of advanced instruction, he does want to frame it differently. Instead of programs being solely for the “gifted” or “talented,” they should be open to anyone at any point when they are ready. Kaufman wants a more dynamic and flexible gifted and talented education program that considers a wide range of indicators—such as thinking flexibly, self-reflection, creativity, imagination, innovation, taking responsible risks, listening with understanding and empathy, and remaining open to continuous learning—which would give more people a bite of the gifted apple.

Strict cutoff scores for gifted programs and intelligence assessments should be abolished, in Kaufman’s view. Test scores must be viewed within a larger context, he says: “How do students behave during testing? What kind of learning opportunities and environment are they exposed to? What’s their level of grit, leadership, creativity, and talent for things other than academics?”

Kaufman points to Project Bright Idea as an example of how this might work. It believes, and has yielded impressive results, that all children benefit from a gifted curriculum. Here’s what Kaufman wrote about it in a July 2013 op-ed for the Los Angeles Times:

The latest phase focused on K-2, with students whose economic and educational backgrounds don’t usually land them in accelerated programs … Virtually none of the students involved had been nominated for gifted and talented programs. But by second grade, about 1 in 4 was identified as gifted. And even those who weren’t showed substantial improvements in the gifted behaviors that were taught. On top of that, one principal found that nearly every Bright Idea student scored 50% to 100% higher than students in the regular classrooms on every academic assessment given.

It’s time for a paradigm shift, Kaufman says. What we need is an educational culture that allows for a wide range of personal characteristics to be accepted, cultivated and considered as potential gifts, he argues. Whether this is a practical solution that can also be implemented, it’s certainly a welcome opinion to hear amidst the debates of how and what students should be taught and the growing emphasis placed on standardized test scores.

Kaufman acknowledges that paths to success look different for everybody, but we all deserve the chance to be valued for our unique strengths. With enough support, encouragement, effort, understanding, determination, drive, internal guidance and a plethora of other golden combinations, we have a fighting chance of becoming a successful version of our younger, (ungifted) selves.