Rural schools in Mississippi are growing in enrollment and serving more low-income and minority students than previous years, according to a report released Monday. 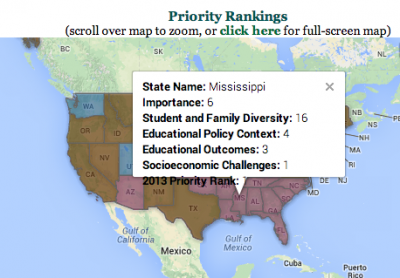 The Rural School and Community Trust, a Washington D.C.-based non-profit, released “Why Rural Matters,” its seventh biennial report that examines education data, socioeconomic factors, funding, and policy in each state. The report ranks states based on 24 data points, or “indicators,” to determine which states have the greatest need “for policymakers to address rural education issues within that state.”

For years, Mississippi has ranked first in the report’s “rural priority gauge.” More than 56 percent of public school students in the state attend rural schools, an increase of 12 percentage points since the 2002-03 school year and a higher percentage than all but two states. Those students are also increasingly low income. Since the 2008-09 school year, the percentage of rural students who qualify for free or reduced lunch has increased from about 63 percent to more than 65 percent, far higher than the national average for rural students of 47 percent.

While the overall percentage of minority students in Mississippi’s rural schools has increased only by about half a percentage point since the 2008-09 school year, the demographic makeup of schools is shifting. According to the organization’s 2012 report, the number of rural Hispanic students in the state increased by 530 percent between 1999 and 2009. Nationwide, Hispanic students account for nearly 93 percent of new rural students, according to this year’s report.

This story is part of our ongoing in-depth coverage of the state of education in Mississippi. Dig into the entire series of stories or choose from some highlights below.

The authors of the report note that Mississippi ranked first due to the high percentage of minority and low-income students, as well as low test scores and certain state education policies. Rural students in Mississippi posted the worst eighth grade math scores on a 2011 national standardized exam, and the third worst eighth grade reading scores. Rural teachers in the state are paid the seventh lowest salary out of all states, and Mississippi ranks in the bottom five in rural per-pupil funding. The state spends about $4,600 on each rural student, compared to the national average of more than $5,800.

Robert Mahaffey, spokesman for The Rural School and Community Trust, said that in states like Mississippi, Alabama and South Carolina, which are consistently rated as rural priority states, policy makers and the public need to “systemically and sustainably” invest in rural education, communities and schools. “The rural communities in those states are totally invisible,” Mahaffey said.

Nationwide, enrollment in rural schools is growing faster than in non-rural areas. Nearly one-third of all public schools are rural, and more than 20 percent of the nation’s children are enrolled in rural schools. The percentages vary greatly by state, with Vermont serving more than 57 percent of students in rural schools, while Massachusetts serves only about 4 percent.