More children will live in poverty this year. More will have two parents who are unemployed. Fewer children will enroll in pre-kindergarten programs, and fewer teenagers will find jobs. More children are likely to commit suicide, be overweight and be victimized by crime. This is all according to a report released today by the Foundation for Child Development that measures the impact of the recession on the current generation.

These are the children of the Great Recession, a cohort that will experience a decline in fortunes that erases 30 years of social progress. The report – known as the Child and Youth Well-Being Index – predicts that in the next few years, the economy may recover and the unemployment rate may drop, but the generation growing up now could feel the harsh impact of the recession for years to come.

“These are the lasting impacts of extreme recessions,” said Kenneth Land, a professor of sociology and demography at Duke University and author of the report.

The Foundation for Child Development, a national, private philanthropy based in New York, has tracked a combination of indicators ranging from childhood obesity to teenage births since 1975. The current report predicts that the number of children living in poverty will rise to 15.6 million in 2010, an increase of more than 3 million children in four years. More than a quarter of American children will live in families where both parents don’t have full-time jobs, up from 22 percent in 2006. As many as half a million children could become homeless, up from 330,000 in 2007.

The decline in overall child well-being in the U.S. comes after several years of improvement driven largely by declining rates of crime, drinking and drug use, according to the report, which includes data from the U.S. Census, Centers for Disease Control and Prevention, and the National Center for Education Statistics. The percentage of children living in poverty had also been dropping relatively steadily until 2000, when it began ticking upward. 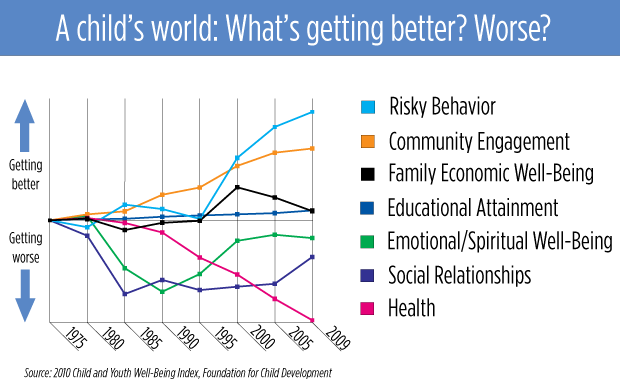 Schools will be hit particularly hard by the aftershocks, said Land. As more families enter the ranks of the poor, more children will arrive at school behind their wealthier peers, yet fewer will have the benefit of quality early education to help them catch up. The children who miss out on pre-kindergarten now will likely have lower reading and math scores in five years, when they enter fourth grade. In another decade, they’ll be more likely to drop out of high school.

“If you trace out those cohort effects, kids who don’t get good schooling early in life, typically score less well on standardized tests later. They have a more difficult time staying attached to school,” Land said.

In addition, the uncertain future of the recession generation could challenge education reform goals for local districts and the Obama administration’s drive to make American students more globally competitive. Already, U.S. students trail their peers in many developed countries on most measures of child well-being. American children were last or close to last in terms of poverty, parental employment, safety, health and family relationships compared to 20 other developed nations, according to a 2007 UNICEF report. They were also close to the bottom in educational achievement.

Curtis Skinner, the director of family economic security at the National Center for Children in Poverty at Columbia University, said he’s seen similar trends in his own research.

“It means a lot of long-term bad effects,” he said. “We can expect more of these problems down the road.”

The report notes the inability of children to read at grade level by the end of third grade, a direct consequence of students not having had a chance to attend preschool. The widespread concerns come at a time when early education programs have been struggling to serve all the children who qualify for them, with expansion in 2009 slower and more uneven than in previous years, according to the National Institute for Early Education Research at Rutgers University in New Jersey.

Children in New Jersey’s Perth-Amboy public schools are already dealing with an array of recession-related consequences, said John Rodecker, the district superintendent.  The school district, in a poor city with a large population of newly arrived immigrants, worked hard to get off the “In Need of Improvement” list under the No Child Left Behind law. State funding cuts have forced Rodecker to lay off staff and trim programs for next year, and he worries that other, subtler effects could also erase the district’s recent gains.

“The economy in general has had an impact on the city we’re located in and on families,” Rodecker said. “It can’t help but impact the weight on the child’s shoulders while they’re in school. They face challenges in good times. To add further economic stress to the family unit tends to wear them down.”

Skinner said there was a relatively sharp increase in poverty between 2007-2008 that he expects to continue this year.

The report’s projections are drawn from the consequences of past recessions. Land, its author, points to declines in reading and math scores on the National Assessment of Educational Progress (NAEP) among fourth-graders in the mid-1980s and ’90s, which he said can be partly attributed to the rise in family poverty during the recessions of 1981-82 and 1990-91.

Yet even as local governments are slashing early childhood programs, the Obama administration has pledged to beef up Head Start and Early Head Start programs, which are set to serve an additional 66,000 children under new funding increases. The recent extension of unemployment benefits has also reinforced the safety net for poor families, which could mitigate the experience of severe poverty, according to Sanders Korenman, a professor in Baruch College’s School of Public Affairs and a senior economist for labor, welfare, and education under President Clinton.

Korenman also cautioned that there’s still not enough data to assume children growing up during this recession will suffer long-term problems.

“I don’t think that we know enough about what this recession has brought,” he said.

Korenman, along with other researchers, agrees that the recession has yet to unleash its full force on most families, leaving uncertainty about how children will ultimately fare. The federal bailout delayed the fiscal crisis in most states, but now, huge cuts in education, public safety, and Medicaid are imminent in many states.

“The strongest evidence for adverse impacts is long-term, severe poverty,” Korenman said. “Certainly a recession like this raises the risk for that.”

Sarah Garland is a staff writer for The Hechinger Report.