In the final moments of the third presidential debate, a somewhat exasperated moderator, Bob Schieffer, tried to regain control of a conversation that had veered wildly off topic. The original question was about China’s currency manipulation, but after some back-and-forth, Republican nominee Mitt Romney was once again explaining why, despite his love of teachers, he doesn’t think hiring more of them would help the economy.

“I think we all love teachers,” Schieffer interjected. 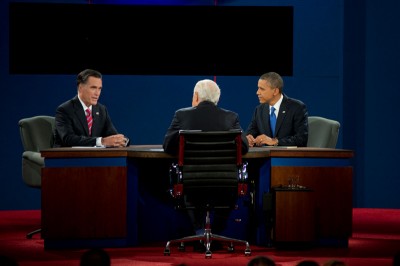 It wasn’t the only time the candidates strayed from foreign policy—the topic of the debate—to American classrooms. Earlier in the night, President Obama had steered a discussion about America’s role in the world to his education policies, saying “we didn’t have a lot of chance to talk about this in the last debate.”

In fact, both Obama and Romney returned to education again and again in all three debates—often in response to questions that had little to do with the topic. The surge of interest in education in the final weeks of the campaign, including campaign ads that attack Romney’s views on class size and sidetracked answers during debates, follows months in which both candidates mostly ignored the subject. Education’s sudden popularity has to do mainly with Obama, who has pounced on it as a way to draw a contrast between himself and Romney on the most important issue in the campaign—the economy.

Shortly after Romney selected Paul Ryan as a running mate, the Democrats seized on Ryan’s budget proposal, which could lead to cuts in federal funding for schools, and began making a new argument about the Republican platform: Romney sees education as an expense, and Obama sees it as an investment. That’s the message Democrats have been pushing whenever possible. Obama and his surrogates, including former President Bill Clinton, have repeatedly brought up Obama’s support of early childhood programs, funding for K-12 schools, and college affordability.

Ed in the Election

Read more of our stories looking at how education is being discussed/debated in the election.

It’s a concern Obama’s team hopes will resonate with the middle class, young people and his base. “He’s playing to a historical strength of Democrats,” said Andra Gillespie, a professor of political science at Emory University who has also worked as a pollster and political consultant. “What better time to talk about education issues than when people are back in school … or sending a child to college?”

Obama and Romney don’t actually disagree as much about education as they do about some other issues, such as tax policy. Romney has praised U.S. Secretary of Education Arne Duncan, raising speculation that he might even appoint him to his cabinet if elected. Both candidates support charter schools and pay-for-performance for teachers. When Romney put out his white paper on education policies in May, it drew little criticism from Democrats. The Obama campaign has essentially ignored Romney’s signature K-12 proposal, which could create a nationwide voucher system for low-income and special-needs students.

When it comes to education, the main difference between the two presidential candidates is Paul Ryan. The Ryan budget, which was presented to Congress in 2011 and which Romney said he would have signed, calls for a 20 percent cut to discretionary funding. Although the budget doesn’t specify how that decrease will be divvied up among departments, Obama has repeatedly claimed that Romney would cut education spending by a fifth, if not more. The Republicans contend that is not true.

The Democrats have bolstered their narrative of an austerity-focused Republican ticket using Romney’s repeated statements that hiring more teachers won’t help grow the economy and that decreasing class size shouldn’t be a priority. They’ve sought to draw a contrast between those views and the investments that Obama has already made in education while in office, such as increasing the number of low-income college students receiving Pell Grants. Obama also reformed the student loan program and held student loan interest rates down. These changes, Obama says, have made college more affordable and student debt less daunting.

“It’s a positive theme for the future they can emphasize, rather than an attacking theme,” said David Lublin, a professor at American University.

Obama’s education messaging has put Romney on the defensive. The Republican contender abruptly promised in the first presidential debate that he wouldn’t cut education spending at all. He went from backing Ryan’s plan to tighten Pell Grant eligibility, which would shrink the number of students who receive federal help, to saying he wants the program to grow.

Romney has also discussed the need to drive down college costs and has mentioned a merit aid program he started for top performers in Massachusetts that provided scholarships for those who opted to attend in-state public universities and colleges. (The program ended up hurting students more than it helped them.)

Both candidates are trying to woo not only middle class voters with these arguments, but young ones as well. Young voters were crucial to Obama’s 2008 victory. While the demographic still supports him, polls suggest they’re less likely to vote this time. “President Obama needs to shore up his base,” Gillespie said. “He wants to frame himself, unlike the Republicans, as a champion of students.”

Romney has tried to close the youth gap between himself and Obama by frequently assuring those in college that he’ll have jobs waiting for them when they graduate.

Even if the Democrats have found a Republican weakness to exploit, however, it may be too little, too late. “I don’t think it’s been made enough of a focus that it’s necessarily a crystallized issue for the election,” Lublin said, adding the Democrats should have “identified [Romney] as negative on this issue before he changed his mind back to center.”

In all likelihood, education won’t be the number-one issue for many voters on Election Day. But the Obama campaign is hoping that some of its pro-education messaging—helped along by the repeated talk of teachers and schools—will sink in.