On the heels of a significant late June Supreme Court ruling that seemingly opens the doors for increased funneling of public taxpayer dollars to religious schools, parochial school leaders are urging leaders of the Trump administration as well as state lawmakers across the country to expand school voucher programs.

“School choice,” an umbrella term used to cover private school vouchers as well as other alternatives to traditionally designated public schools, seems to be a new slogan for our land of freedom.

Within each proposal, advocates of school choice emphasize the ability of individuals to use the market to exercise their personal liberty in unrestrained ways. On the face of it, “choice,” the “freedom to choose,” and “religious freedom” are welcomed in democracy.  But let’s take a closer look at what we might risk by invoking such freedom when it comes to education: public goods, concern for the well-being of all students, and democratic decision making.

What may buoy Catholic schools plagued by declining enrollments and rising costs in their schools, may pose significant concerns for our larger democracy.

Freedom, as celebrated by many school choice proponents and their neoclassical economic influencers, is mostly aligned with Friedrich Hayek’s definition in The Constitution of Liberty as freedom in a negative sense—the absence of coercion. Hayek adds that freedom should be a value celebrated unto itself, without taking into consideration whether the results of an individual’s pursuit of freedom will be harmful or beneficial to others. The freedom invoked is sought independently of the public good, including the political and social purposes that compose it. Indeed, the public sector is seen as necessarily restrictive of private liberty and the marketplace is envisioned as a freer space of connected individuals.

“Vouchers, under the guise of giving more decision-making freedom to parents, strip publics from their ability to democratically debate alternatives and construct improved solutions in schools.”

Invoking a spirit of freedom in the choice to remove one’s child from a traditional public school, however, may lack sufficient concern for the well-being of the others left behind in that school, or for the types of communal decision-making that emphasize the well-being of all people. Foregrounding the freedom of individuals leaves behind the communal significance of the welfare state and notions of citizenship as concern for others and the public good. Many school choice advertising materials champion the individual liberty of parents to choose schools that serve the best interests of their children as individuals, all the while heralding the choice to break away from craftily dubbed “government” schools that are seen as restrictive and bureaucratic.

Related: OPINION: The Supreme Court just let a church use public funds to fix its playground. Will this shift public education’s terrain?

While the Catholic church has long been a committed servant of the oppressed and struggling, a recent letter to lawmakers from the Chairman of the Committee on Catholic Education suggests more worrisome implications for marginalized people. The letter urges that Catholic schools that receive vouchers be allowed to pursue their freedom and independence, which includes “control over mission-driven hiring, academically-stringent admissions, and curriculum.”  A closer look at how those elements have played out already reveals hiring practices that exclude homosexual teachers and those that give birth outside of wedlock, admissions that leave behind the learners most in need of assistance, and curricula that holds views of science (including sex education, amongst others) that run counter to mainstream views deliberated in public and scientific venues and may jeopardize the well-being of students. While this may be freedom for some, it denies opportunity for others. Relatedly, the letter demands that Catholic schools be excused from the burdens of bureaucratic oversight of testing—originally intended, in part, to measure the equal educational opportunity of all children — and be held only to satisfaction standards of parents.

Related: Does the education budget reveal a ‘DeVos Doctrine?’

Across the school choice movement, we see that the Margaret Thatcher-inspired logic of “there is no alternative” to the market is serving to close down political spaces of deliberation. Or, it fails to recognize complexity in understanding the current educational situation because it presumes a clear and straightforward economic solution of privatization and free market ideology.

This logic functions undemocratically to determine appropriate trajectories and goals in advance, without considering input or circumstances of actual citizens. In other words, markets allow for choice in only a limited sense (within the paradigm of free market decision-making), and curtail the public’s capacity to make meta-choices, like whether the market is the best way to proceed. Markets are not an acceptable replacement for public deliberation about our aims and goods.

Succumbing to the appeal of seeming market power and not realizing that their choices have been limited, parents may unwittingly relinquish true political deliberation and decision-making opportunities when they employ vouchers in particular.

Vouchers, under the guise of giving more decision-making freedom to parents, strip publics from their ability to democratically debate alternatives and construct improved solutions in schools. And, while vouchers motivate parents to take action regarding their child’s education, they do so often out of only their private or religious interests with little concern for public goods or common living. While vouchers seem to provide quicker and more efficient action to secure better schooling for a child, and, indeed, in some particular cases they do, collectively the mass use of vouchers forsakes important avenues of public change that, while much slower, are capable of achieving successful schooling for a wider array of children and better compromises between individual desires and public interests.

Related: Why six states still spend nothing on preschool

Admittedly, parents seeking the best education possible for their child face an extremely difficult position when they are relegated to privately consider prioritizing the good of others in the long run, which should be a matter of public debate and action, over their own child in the moment. Market approaches like vouchers mistake school choice as an individual rather than a public choice. Such approaches abandon common living and shared aims, as well as ways of thinking, questioning, and acting that engage publicness as we face problems and construct solutions. They do not enable, or encourage, democratic-justice-, and freedom-oriented decision making.

Schools forged under this market model of economic citizenship forgo the public for the private, jeopardizing not only the public good, but also the practice of publicness, the longstanding act of working together in our public schools. Our attention right now may be fixed on the latest court decision to hand over tax dollars to pay for religious school playgrounds, but we need to not lose sight of the bigger picture of what is at stake. Vouchers not only take public dollars and direct them toward private interests, but also take public problem-solving and replace it with private, self-serving action.

As Justice John Paul Stevens warned in his 2002 dissent against the use of vouchers, their use “weaken[s] the foundation of our democracy.” And when economic justifications for schooling trump civic goals of creating and sustaining public life, we pay the high price of forsaking the public benefits of public education. Indeed, this price is much more significant than many of the costs of education seen through a narrow lens of economics or calls for individual freedom.

Sarah Stitzlein is an author and associate professor of education and affiliate faculty in philosophy at the University of Cincinnati. This piece has been adapted from a new book soon to be released by the author, American Public Education and the Responsibility of its Citizens: Supporting Democracy in an Age of Accountability (Oxford University Press, 2017). 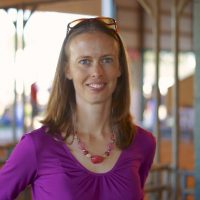 Sarah Stitzlein is a professor of education and affiliate faculty in philosophy at the University of Cincinnati. She is the author of Teaching for Dissent:… See Archive