May 17th marked the 62nd anniversary of Brown v. Board of Education, the landmark case that put in motion the Civil Rights Movement and remains a poignant moment in American history.

The 1954 United States Supreme Court decision declared “separate but equal” unconstitutional and required the integration of those schools that were segregating students. The decision outlined the fundamental role that education plays as well as the importance of access to quality education for all young people.

At the 62nd anniversary of this brave decision, the State of Mississippi has echoed, once again, that it does not truly care about equality.

Related: Frustration over instability, violence at a Mississippi high school

This week, a federal judge ruled that the state’s Cleveland School District must desegregate its schools. That the district had maintained a system of segregation is appalling. The district caused irreparable damage to the African-American children in its community by creating a sense of personal limitations, thereby retarding the child’s educational and moral development. “The delay in desegregation has deprived generations of students of the constitutionally guaranteed right of an integrated education,” U.S. District Court Judge Debra M. Brown wrote in her decision.

‘The delay in desegregation has deprived generations of students of the constitutionally guaranteed right of an integrated education.’

What is more alarming is that the Cleveland School District is likely not alone in its maintenance of separate educational systems. Many students still attend segregated schools, and research shows that racial segregation is on the rise, accelerating most rapidly in the South.

The U.S. Government Accountability Office (GAO) in its April 2016 Report found that “the percentage of K-12 public schools in the United States with students who are poor and mostly Black or Hispanic is growing and these schools share a number of challenging characteristics.” GAO found that these schools were the most racially and economically concentrated. A commonly used indicator of poverty is the number of students who are eligible for free or reduced lunch.

GAO reports that 75 to 100 percent of those students who qualified were Black or Hispanic. Its analysis of the Department of Education data also found that these schools, compared to other schools, “offered disproportionately fewer math, science, and college prep courses and had disproportionately higher rates of students who were held back in ninth grade, suspended, or expelled.” As a result, poor students of color are left to inhabit poorly funded, poorly resourced neighborhood schools, and are denied access to quality, integrated education.

Schools with large numbers of impoverished students tend to have lower test scores, offer inferior and fewer advanced courses, employ more uncredentialed teachers and graduate fewer students who go on to college. Facing these obstacles, minority students are more likely to drop out or be pushed out of school before obtaining a high school diploma.

Unsurprisingly, minorities are overrepresented in the juvenile and criminal justice system. Disparity in the kind of education available to children in different school districts, in the absence of special needs, is a major constitutional problem.

Related: How Mississippi got an award for education

Racial inequalities and discrimination continue to permeate not just our educational system, but a variety of institutions in ways that continue to deny opportunities to people and communities of color.

Mississippi continues to be the poorest state in the nation. Mississippi has the lowest score on the composite poverty and opportunity index. It ranks last on the percentage of women above poverty, and among the bottom ten on the percentage of women with health insurance coverage and with a bachelor’s degree or higher. Mississippi is second only to Louisiana in incarceration rates. Mississippi’s statistics about disparities in education, employment, health, incarceration and other equitable opportunities are all too familiar. They should not be so familiar that we have become accustomed to them and accept them as our lot in life. We must recognize the systems we have in place — from education, to employment, to housing, to incarceration — are interrelated.

Increasing investments in quality education for all students is an important means of improving opportunities for all youth and their communities. Spending for elementary, secondary and higher education has been outpaced by increases in spending on corrections. If, by 2020, students of color were graduating from high school and college at the same rates as white students, the U.S. economy would stand to gain $310 billion dollars.

Building an equitable state, one where all people have genuine access to the opportunities that could make Mississippi better, requires intentional, targeted action.

Therefore, it is our hope that the citizens of Mississippi will rise up and declare we will no longer allow “justice for all” to remain unfinished business.

Jennifer Riley-Collins is the executive director of the ACLU of Mississippi. 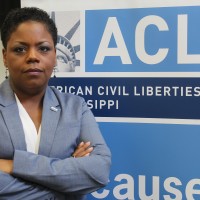 Jennifer Riley-Collins is the executive director of the ACLU of Mississippi. See Archive