If you were surfing the Internet in 2004, you wouldn’t have known that the sophisticated music-hosting website and graphic-design service blog you stumbled upon were being run by a 12-year-old hobbyist. That 12-year-old was me. After school, I’d prioritize building websites – out of a need to express myself and create something – over doing my reading comprehension questions that were due the next day.

I taught myself HTML and CSS, but I had no idea what ‘computer science’ was. Because my middle school and high school in La Puente (a lower income city in California) never offered a computer science course, or explained to me what it was, I was left to own assumptions. Technology was only something I saw as a hobby, and I didn’t realize I could make a well-paying career out of it.

But sometime after college, I learned about computer science through Codecademy, an interactive website that gives free coding lessons. After dabbling in my first few Javascript and PHP lessons, I was hooked. The thought of creating something with code – the thought of innovating – excited me. Why was I was never aware of the benefits of knowing what programming was – until now?

Through the Educate to Innovate Initiative, the Obama administration has argued that investments in science, technology, engineering and math are essential to keeping the country internationally competitive. But since the initiative’s launch in 2009, the importance of computer programming education is still being misunderstood and ignored. Though the administration is focused on getting more technology into schools, it’s behind on teaching kids what could really help them compete internationally: code.

“If lower-income students have opportunity to learn computer science, it could be a great social equalizer of our time”

Part of the problem is a generational divide. Amy Liu, a parent of elementary students from Alhambra Unified School District, which is roughly 14 miles away from La Puente, acknowledges that kids have a different relationship with technology than her generation did. “I started my computer class in high school and my daughter started learning how to use a computer in kindergarten,” she says. “My son is now in 6th grade and he can easily navigate a computer and use the Internet.”

A study by the University of Chicago called Computer Science in Schools Report found that though students tend to have a good understanding of computer science, it’s the adults in the community who don’t. Brian Au, a senior at Alhambra High School, recognizes that many of his classmates understand the importance of knowing how to code, but that doesn’t seem to be a priority of the school district. “I think the district is promoting the use of computers,” Brian says, “but I don’t think computer science itself is being promoted.”

Though technology has become such a focal point in the national education debate, computer literacy is still often confused with computer science. While computer literacy refers to word processing and use of the Internet, computer science refers to the study of algorithmic processes, hardware and software designs, and ways to impact society with technological innovation. A general computer science curriculum largely consists of critical thinking, problem solving, and logic – the skills that American students will need in order to compete for the best jobs, whether or not they become programmers. 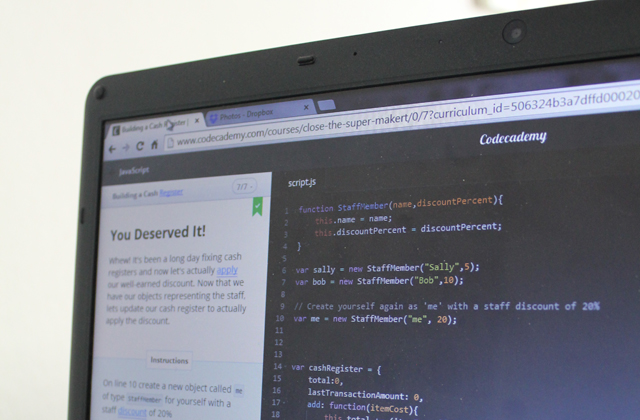 One hundred years ago, to be literate meant being able to read and write. Now, with the Internet and mobile phones changing how we extract information and interact, technology has become a fundamental part of our everyday lives. This is why computer programming is the new type of literacy students need. To understand how the world works, students need to understand the different technologies that run it. Even if they don’t want to become software developers, knowing how to code will only enhance their résumés in a workforce that is becoming more and more technologically dependent.

Joanna Goode, assistant professor of Education Studies at the University of Oregon who studies computer science education, says that excluding computer science from school curriculums better represents 20th century learning than 21st century learning. Roxanne Emadi of Code.org, a non-profit advocating for computer science in the core curriculum, adds that knowing how to code is becoming important in a wide range of fields, not just in Silicon Valley. People with coding skills are not only being hired in the tech industry, she explains, but in fields like journalism, entertainment, and health care, too.

Not everyone agrees that computer science belongs in the school curriculum. Paul Fung, a former social studies teacher and current district librarian of Bellflower Unified in California, believes that computer science should be an afterschool elective instead. “I don’t believe in teaching technical skills because those skills change,” he says. “But a general education that includes philosophy and literature would teach students how to become a person, and then the technical skills can come later.”

But not teaching computer science to minority, immigrant and low-income students in cities like Alhambra may keep them behind wealthier students who’ve had the opportunity to learn it much earlier on. In the award-winning book Shallow End: Education, Race, & Computing, author andUCLA professor Jane Margolis says that two out of three schools offer computer typing courses, and only the wealthiest schools offer computer programming courses.

What I would do with more money for California schools

This essay is part of a collaboration between The Hechinger Report and USC Annenberg’s Reporter Corps, which trains young adults from diverse and under-represented neighborhoods to report on their own communities. Students from Alhambra, California — a predominantly immigrant Los Angeles suburb — wrote about how they’d spend a new influx of funding for the state’s schools.

“If lower-income students have opportunity to learn computer science, it could be a great social equalizer of our time,” says Roxanne Emadi. According to the Bureau of Labor Statistics, the average median salary of a software developer in 2012 was $93,350 per year with only a bachelor’s degree and no extra schooling. Additionally, the job market growth for software developers is projected to grow by 22 percent in 10 years, which is much faster than the average.

“Computer science has become privileged knowledge,” says Chris Stephenson, the executive director of the Computer Science Teachers Association, a professional network. Around Alhambra, areas like South Pasadena and Arcadia – where in 2011 the median household incomes ranged from $71,751 to $78,899 compared to $53,233 in Alhambra – offer basic computer programming courses as well as AP Computer Science. Alhambra Unified only offers one programming class called Math Programming, and only at one of their high schools. Many Alhambra students are unaware even of this offering.

If the Obama administration wants to create a future generation of STEM leaders, computer science must be a required part of their education.

This story was produced by USC Annenberg’s Reporter Corps, which trains young adults from diverse and under-represented neighborhoods to report on their own communities, in partnership with The Hechinger Report. The local news site Alhambra Source, which is also affiliated with USC, hosted the project.