The NEA Foundation recently celebrated their Awards for Teaching Excellence recipients, on Feb.7, but people of color literally weren’t in the crowning finalist picture.

Actually, of the 36 total people who were recognized two were perceptible people of color (under 6%), which according to The Woodrow Wilson National Fellowship Foundation is about ten points behind the national rate (16%). 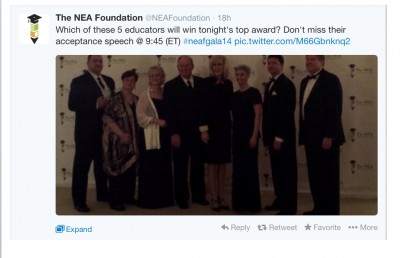 So, what exactly are we celebrating? Who are we honoring? What lessons are being taught through a ceremony short on diversity? Stark absences of diversity in any field, but particularly the field of education, are effectual declarations of retrogression.

When I first saw the five finalists pictured in a tweet, I immediately asked, “Where are the people of color?” Pictorial diversity is de rigueur in “post-racial” America. Surely our most symbolic gestures of achievement can have the racial diversity ratio of a beer commercial (typically 1 out of 4). Sadly, I’ve grown accustomed to tokenism (having regularly served the role) because it provides a modicum of evidence that an organization is trying to be democratic. I certainly carry baggage in this discussion.

I truly believe underrepresentation is an extension of organizations not attending to processes that should demand inclusion. But I worry that the once fashionable excuse of colorblindness has turned into blatant resistance to inclusion. In the context of comedy, Jerry Seinfeld expressed this backlash in a recent interview.  Seinfeld said, “People think [comedy] is the census or something, it’s gotta represent the actual pie chart of America; who cares?”  Likewise, educational organizations give out awards under the illusion of a colorblind process. Without purposeful efforts to be inclusive you get regurgitation of a privileged class.

Stark absences of diversity in any field, but particularly the field of education, are effectual declarations of retrogression.

I would never encourage Benetton, kumbaya award ceremonies that are equally as patronizing. But let’s be clear, there isn’t a scientific way to determine the best in teaching, nor is there a “right” mix of people to be in the picture. Awards are purely symbolic statements. Our ceremonies and top-ten lists should symbolize what we want to be as an organization, community and profession.

People don’t wear their racial identities on their foreheads so I really don’t know if the Teaching Excellence recipients didn’t represent the membership. Passe blanc Creoles always go undetected. But seriously, it’s very likely that NEA’s membership doesn’t reflect the teacher population. How the NEA and American Federation of Teachers dealt with and continuously deal with integration impact the composition of its membership.  Woodrow Wilson reports that if current trends hold, the percentage of teachers of color will fall to an all-time low of 5 percent of the total teacher force by 2020. At the same time the percentage of students of color will likely exceed 50 percent. We should encourage teachers of color to stay in the profession especially in ceremonies that are symbolic.

This is not to isolate NEA. “Some of my best friends are members.” I’ve also challenged Teach for America, the education reform community as well as organizations that I’ve worked for to become more inclusive. As an aside, universities talk big game about diversity. Look at the percentages of tenured faculty as well as the composition of executive cabinet to gauge an institution’s commitment to diversity. No one is clean.

The same issue came up last year when Michael Petrilli published his The Top Twitter Feeds in Education Policy (Crowdsourced Edition). Petrilli received quite a bit of hateraid because his list didn’t include some obvious influentials. However, the most substantive critique was the effort essentially became a list of the most resourced (privileged) educators in the country. Again, Petrelli attempted to create a methodology that never escaped the confines of privilege. The result was a list that rewarded the regular muckety mucks of education – largely white, largely upper-class.

From the Grammys to Forbes’ 30 under 30 to Teaching Excellence: mainstream award ceremonies are more symbolic statements about who is a member of a clique than anything else (Macklemore did not have the better rap album). Honoring seldom aims to break casts that produce our peculiar social molds. When the selection process doesn’t seek inclusion, we never learn if the honorees are predetermined to win. Eventually, a lack of diversity ultimately strips the emperor of his clothes, leaving pock mocks of privilege bare. To the privilege go the spoils.

And while I throw salt on these ceremonies, I should note that teaches and educators who deserve awards don’t seek them, nor should we. Real educators don’t have the time or sponsors to meet the application deadlines. Moreover, I have to believe in a higher standard for educational excellence. We can’t give power to authority that struggles to recognize people of color. I’m just saddened when significant contributors aren’t recognized.

Education is often seen as an art, and beauty is in the eye of the beholder. But the NEA has thousands of black, Latino and Asian beholders that should reflect an incredible tapestry of its membership.  However, if the artistic expression is painted in “flesh-colored” tones, then beauty is clearly defined by the painter.

In 21st century America, if the crowning group photos of the award show, “top ten” or “most influential” list doesn’t include people of color, then go back and start again. Honor without diversity is disgrace.