An unprecedented study that followed several thousand undergraduates through four years of college found that large numbers didn’t learn the critical thinking, complex reasoning and written communication skills that are widely assumed to be at the core of a college education.

Many of the 2,322 students moved through four years of studying, working, volunteering and socializing without learning how to sift fact from opinion, make a clear written argument or objectively review conflicting reports of a situation or event, according to New York University sociologist Richard Arum, lead author of the study. The students, for example, couldn’t determine the cause of an increase in neighborhood crime or how best to respond without being swayed by emotional testimony and political spin. 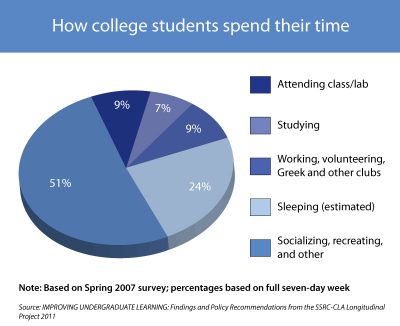 Arum, whose book Academically Adrift: Limited Learning on College Campuses (University of Chicago Press) comes out this week, followed traditional-age students from the fall of 2005 to the spring of 2009 and examined testing data and student surveys at a broad range of 24 U.S. colleges and universities, from the highly selective to the less selective.

Forty-five percent of students made no significant improvement in their critical thinking, reasoning or writing skills during the first two years of college, according to the study. And after four years, 36 percent showed no significant gains in these so-called “higher-order” thinking skills.

Combining the hours spent studying and in class, students devoted less than one fifth of their time each week to academic pursuits. By contrast, students spent 51 percent – or 85 hours per week – socializing or in extracurricular activities. And they slept an average of under six hours per night.

“These findings are extremely valuable for those of us deeply concerned about the state of undergraduate learning and student intellectual engagement,” said Brian Casey, president of DePauw University in Indiana and a former top academic official at Harvard and Brown Universities. “They will surely shape discussions about curriculum and campus life for years to come.”

The study marks one of the first times a cohort of undergraduates has been followed over four years to examine whether they’re learning specific skills, and provides a portrait of the complex set of factors – from the quality of secondary school preparation to the academic demands on campus – that determine learning. The study shines a spotlight on the quality of the college education they receive.

Some educators note that a weakened economy and a need to work while in school may be partly responsible for the reduced focus on academics, while others caution against using the study to blame students for not applying themselves.

Howard Gardner, a professor at Harvard’s Graduate School of Education known for his theory of multiple intelligences, said the study underscores the need for higher education to push students harder. “No one concerned with education can be pleased with the findings of this study,” said Gardner. “I think that higher education in general is not demanding enough of students – academics are simply of less importance than they were a generation ago.”

But the solution, in Gardner’s view, shouldn’t be to introduce high-stakes tests to measure learning in college because “the cure is likely to be worse than the disease.”

“In all these 24 colleges and universities, you have pockets of kids that are working hard and learning at very high rates,” Arum said.  “There is this variation across colleges, but even greater variation within colleges in how much kids are applying themselves and learning.”

For that reason, Arum added, he hopes his data will encourage colleges and universities to look within for ways to improve teaching and learning.

Arum co-authored the book with Josipa Roksa, an assistant professor of sociology at the University of Virginia. The study, conducted with Esther Cho, a researcher with the Social Science Research Council, found that students of whom more was asked did learn more.

Students who majored in the traditional liberal arts – including the social sciences, humanities, natural sciences and mathematics – showed significantly greater gains over time than other students in critical thinking, complex reasoning and writing skills.

That is welcome news to liberal arts advocates. “We do teach analytical reading and writing,” said Ellen Fitzpatrick, a professor of history at the University of New Hampshire, who has also taught at Harvard and Wellesley.

Students majoring in business, education, social work and communications showed the least gains in learning. However, the authors note that their findings don’t preclude the possibility that such students “are developing subject-specific or occupationally relevant skills.”

Greater gains in liberal-arts subjects are at least partly the result of faculty requiring higher levels of reading and writing, as well as students spending more time studying, the study’s authors found. Students who took courses heavy on both reading (more than 40 pages per week) and writing (more than 20 pages in a semester) showed higher rates of learning.

Students who studied alone made more significant gains in learning than those who study in groups.

“I’m not surprised at the results,” said Stephen Emerson, president of Haverford College in Pennsylvania. “Our very best students don’t study in groups. They might work in groups in lab projects. But when they study, they study by themselves.”

The study used data from the Collegiate Learning Assessment (CLA), a 90-minute essay-type test that attempts to measure what liberal arts colleges teach and that more than 400 colleges and universities have used since 2002. The test is voluntary and includes real-world problem-solving tasks, like determining the cause of an airplane crash, that require reading and analyzing documents from newspaper articles to government reports.

The study’s authors also found that large numbers of students didn’t enroll in courses requiring substantial work. In a typical semester, one third of students took no courses with more than 40 pages of reading per week. Half didn’t take a single course in which they wrote more than 20 pages over the semester.

The findings show that colleges need to be acutely aware of how instruction relates to the learning of critical-thinking and related skills, said Daniel Bradley, president of Indiana State University and one of 71 college presidents who recently signed a pledge to improve student learning.

“We haven’t spent enough time making sure we are indeed teaching – and students are learning – these skills,” Bradley said.

Christine Walker, a senior at DePauw who is also student body president, said the study does not reflect her own experience: she studies upwards of 30 hours a week and is confident she is learning plenty. The 22-year-old political science major said she and her classmates are juggling multiple non-academic demands, including jobs, to help pay for their education and that in today’s economy, top grades aren’t enough.

If you don’t have a good resume, Walker said, “the fact that you can say, ‘I wrote this really good paper that helped my critical thinking’ is going to be irrelevant.”

Susan Campbell, a psychology professor who is dean of planning and assessment at Middlebury College in Vermont, said the study highlights challenges for busy students, who must attempt to balance academics “with a full slate of co-curricular activities, jobs and other demands on their time.”

“Even when students are willing to work hard academically, as they are at Middlebury, they often complain about the stress of trying to manage these demands and maintain the good grades they expect,” Campbell said.