Here’s something to think about when you hear people question whether student protests are appropriate:

We seem to have forgotten as a nation why we created public schools.

No one is confused about why we have public fire departments or libraries: We all understand their mission for the public good. But the mission and importance of public schools? Not so much.

Our nation’s founders understood that our great experiment in democracy would only succeed if Americans were prepared to actively contribute as informed citizens. In Thomas Jefferson’s words, public schools were created “to instruct the mass of our citizens in these, their rights, interests and duties, as men and citizens.”

How are we doing in that department? Not so well. In a recent Annenberg Public Policy Center survey, three in four Americans could not name the three branches of government. In our last presidential election, more than 100 million eligible Americans did not cast a vote — a number greater than the final vote tally for either major candidate.

There are many reasons for our failure. The pressure of high-stakes testing has caused districts and schools to reduce or even eliminate coursework in civics, along with history, geography, science, arts, and fitness. Today’s students often do not know the basics of how our democracy works.

“Schools must be emotionally and physically safe for all types of students from all backgrounds, so that children do not feel bullied, marginalized or alienated from their school communities.”

But the problem is not just a lack of academic content about civics and history. Students also must be inspired to understand and embrace the responsibilities of living in a democracy, and the importance of working for the common good. Our public schools must reclaim their original charge: to imbue positive character and citizenship to all students while they are learning academic skills.

Many schools and districts these days say they cannot focus on character and citizenship because there is no time, or because those topics are too controversial. The truth is that our schools have no choice about teaching character and citizenship: Every school is already doing it all day long. The experience of school shapes the dispositions and priorities of children. Schools make our children more respectful, responsible, honest and kind — or less so. They make our students more capable and committed as active citizens — or less so.

We can either do this work purposefully and well, or do it poorly. That’s our only choice.

Related: Bullied by the badge?

The epidemic of school shootings in America shines a bright light on this issue in two ways. First, it reminds us that focusing explicitly on positive character in our schools is essential. Schools must be emotionally and physically safe for all types of students from all backgrounds, so that children do not feel bullied, marginalized or alienated from their school communities. This does not come from posters or lectures, but from a daily focus on norms of respect and compassion, and courageous conversations with students and teachers about responsibility and equity.

Second, these shootings remind us that we live in a democracy and we have a responsibility to stand up and contribute to solutions. This is exactly what motivated students from Stoneman Douglas High School to travel to Tallahassee, Florida last week to contribute their voices to legislative debate. Thomas Jefferson would be proud. This is not a partisan response — it is an American response.

A recent Qunnipac University poll revealed that 97 percent of Americans support universal background checks for the purchase of firearms. So do 97 percent of U.S. gun owners. When our laws do not reflect what our citizens want, it is our responsibility to speak up. We should all be proud that high school students have the courage and commitment to do so.

For 25 years I have worked with a nonprofit organization, EL Education, which helps public schools cultivate character and citizenship in students by linking academic learning to civic contribution. Here’s one example of what that looks like. Middle school students at Polaris Academy in Chicago recently led a campaign to address gun violence in their community. They studied the U.S. Constitution and Second Amendment; worked with legislators, police, clergy, activists, and gang members; created public-service announcements shown on television; published a book honoring local “Peacekeepers”; and led a citywide “Day of Peace” that stopped violence in much of the city for the first time in modern history.

Let us all hope that the students of Stoneman Douglas and Polaris Academy are the first wave of a broad student movement to contribute positively to our nation, and that our schools reclaim the charge to make character and citizenship central to their work. Our democracy depends on it.

Ron Berger is the chief academic officer of EL Education. 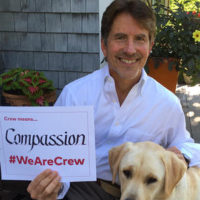