Secretary DeVos has stacked her administration with executives who previously worked at the same schools that reportedly were under investigation.

At the same time, a recent story in The New York Times suggests a troubling development at the U.S. Department of Education. The Education Department is reportedly dismantling a unit created in 2016 to investigate abuses at predatory and abusive colleges. At the same time,

These changes come at a time when things seemed to be improving in the industry, with several for-profit schools voluntarily changing practices, large institutions like Corinthian Colleges Inc. and ITT Technical Institute closing, and several federal and state agencies pushing forward with new investigations.

Nevertheless, because of the long-lasting, negative impact that predatory colleges have had on their students, regulators and enforcement agencies cannot stop, and must increase, their efforts to protect students. The stories we saw during the collapse of Corinthian and ITT Tech are heartbreaking and often involve students in the most vulnerable conditions preyed upon with false promises.

One of these students was Jennifer Wilson of West Florida, who is featured in an upcoming documentary called Fail State. Jennifer dreamt of becoming a victim’s advocate after she lost her daughter to violence in 2001. After seeing an ad for Corinthian’s Everest University, she sought more information from the school.

“As the Trump Administration turns a blind eye to those defrauded students most in need, now is the time for Republicans to stand up for students and say Betsy DeVos and the owner of Trump University are not their own.”

Our goal at the Department of Education was to do more to protect students like Jennifer. This is why we created an enforcement office at the Department of Education. This office contained an investigations group that would take action against similar predatory companies and a borrower defense group that would administer loan discharge claims from students like Jennifer that said they were defrauded.

But the reported shift at the Department of Education signals that the responsibility for investigating and bringing enforcement actions against predatory schools will need to move to the states. State Attorneys General have ramped up investigations into large publicly traded school chains in recent years, including investigations into companies such as Educational Management Corporation (EDMC), Corinthian Colleges, Inc., ITT Technical Institute and Career Education Corporation. In late 2017, the California Attorney General filed a massive lawsuit against Bridgepoint Education, Inc. But there is plenty more work to be done – particularly because states cannot rely on a partnership with the federal government.

This issue should not be partisan. We are starting to see examples of Republican attorneys general cracking down on abusive for-profit colleges. Former Wisconsin AG J.B. Van Hollen, a Republican, sued Corinthian Colleges, Inc. even before most Democrats took action. Likewise, Colorado’s Republican Attorney General Cynthia Coffman recently completed a trial with CollegeAmerica, where she charged the company with false advertising to prospective students, and she is awaiting a ruling. But far more can be done.

The issue of predatory lending and abusive practices in higher education resonates across the political spectrum, as several for-profit companies received billions of dollars from the federal Title IV grant and loan programs in recent years. Many predatory for-profit schools get more than 90 percent of their annual revenue from federal funds, including the G.I. Bill, Department of Defense benefits, Pell Grants, and federal direct loans. Students, are left with enormous debt and, too often, bleak job prospects and now appear to have little ability to get loan discharges from the Department.

Prior to DeVos taking office, nearly every State AG – Republican and Democrat – worked with the new FSA Enforcement Office, to conduct outreach to former Corinthian students that qualified for student loan discharges. But tens of thousands of other borrowers from Corinthian and other predatory schools have claims that are pending, and it appears the partnerships with State AG’s have grinded to a halt.

The DeVos administration has granted few, if any, discharges to students that attended non-Corinthian schools in the 16 months since taking office. As the Trump Administration turns a blind eye to those defrauded students most in need, now is the time for Republicans to stand up for students and say Betsy DeVos and the owner of Trump University are not their own.

The former chief of U.S. Department of Education’s office of the general counsel under the Obama administration, Aaron Ament is president of The National Student Legal Defense Network. 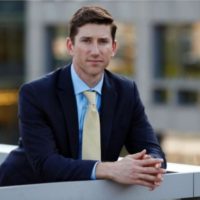 The former chief of U.S. Department of Education’s office of the general counsel under the Obama administration, Aaron Ament is president of The National Student… See Archive