A student-centered personalized-learning model known as competency education has gained traction over the past five years as states have developed policies to promote its adoption in both elementary and secondary schools.

Born from the notion that the old system has significant limitations and flaws in both its structure and its execution in the schools of today, competency education uses a student’s ability to transfer knowledge and apply skills to organize learning.

Students refine these skills based on goal-setting, ungraded feedback known as the formative assessment. When they are ready, the students demonstrate their understanding by performing thoughtfully developed tasks that determine how much learning has taken place. This evaluation is called the summative assessment.

As high schools across the country make the move to competency education models, many parents question what it will mean for their child as they enter the college admission process.

In parents’ eyes, colleges have not yet embraced the change and will be unfamiliar with their child’s competency-based transcript.

This could not be further from the truth.

In her five-part working definition for competency education Chris Sturgis of iNACOL explains how these schools develop college and career readiness.

“The difference for students applying from competency based schools is that they likely will have a higher degree of college and career readiness.”

First, students have the ability to move on when they have demonstrated mastery of a skill or concept at their own pace.

Second, instruction is organized around course-level and grade-level competencies that include explicit, measurable, transferable learning objectives that empower students.

Third, students are assessed at deeper levels, making it more meaningful and a positive learning experience for students.

And fifth, learning outcomes emphasize competencies that include application and creation of knowledge, along with the development of important life-long career-ready skills and dispositions.

Related: A private school with more than $100 million will share its technology with three other schools

Over the last several years, schools like Southern New Hampshire University have blazed new trails in higher education by promoting successful competency-based models. SNHU President Paul LeBlanc, in a white paper on the topic in 2011, wrote, “The game-changing idea here is that when we have assessment right, we should not care how a student achieves learning. We can blow up the delivery models and be free to try anything that shows itself to work.”

SNHU’s model has taken off in a major way. Three years after its conception, SNHU was the highlight of a major 2014 New England Board of Higher Education conference on competency education.

By 2015, President Obama asked LeBlanc to act as an adviser under the Secretary of Education’s office on the role of competency-based education in higher education. Meanwhile, SNHU’s enrollment increased from 2,000 students in 2009 to 34,000 by 2014 and continues to climb. One journalist dubbed SNHU as the Amazon of higher education.

Related: What does it take to make an innovative school?

In many cases, the most important features of a transcript such as a listing of courses taken, final grades, whether or not credit was earned, class rank, and grade point average are present in both models. For competency-based schools, the biggest difference in their transcripts is how those final course grades were reached. Competency-based schools can make a direct correlation between their final course grades and mastery of a skill. The result is a systematic approach and a laser-focus on building college and career readiness in students by all teachers in a system that a traditional school cannot easily match.

It is common practice for high schools to send a school profile with every transcript that explains, in detail, things that make the school unique that would be relevant for an admissions officer as they review the transcript. Competency based high schools often include information about their system in their school profile.

According to the International Association for K-12 Online Learning (iNACOL), an organization that supports much of that policy development, forty three states have developed some degree of state policy flexibility that allows local schools to move to competency education, with nearly a dozen states taking an active role to promote the model in their schools.

The difference for students applying from competency- based schools is that they likely will have a higher degree of college and career readiness.

Better still, as more and more colleges and universities move away from the clock and embrace the competency education model where credit is earned on demonstrated ability in a particular field, students from competency-based high schools will hold a significant advantage.

Brian Stack is the principal of Sanborn Regional High School in Kingston, New Hampshire. He is a strong advocate of personalized learning, competency-based grading and assessment, and high school redesign for the 21st century. 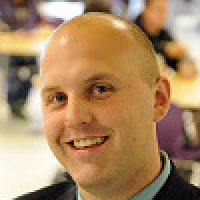 Brian Stack is the principal of Sanborn Regional High School in Kingston, New Hampshire. He is a strong advocate of personalized learning, competency-based grading and… See Archive