The problem with tests is that you’re expected to know the answers.

I know that sounds strange. But through my long and at times painful education, I’ve come to some conclusions about how many of us learn, and it boils down to this: It’s a lot better, and more fun, to come up with a solution — to figure something out — than just to know which answer choice to select.

When I was in middle school, in Brooklyn, my education was mostly about answers. I struggled a lot, and I was held back. Now I look back on those tough times with wonder. I could never have expected that I’d go on to earn an associate degree in electromechanical engineering from New York City College of Technology (NYCCT). I’m the first member of my family to make it this far, and I’m not stopping. I’ve now applied to a bachelor’s degree program in software engineering at NYCCT.

My turnaround started as I was finishing eighth grade. Two things I knew at that point: I wasn’t great at tests, and I loved technology. With that in mind, my father and I looked at a list of schools. His approach was very simple: We’d focus on ones featuring the word “tech.”

That’s how we found P-Tech. It’s a public-private partnership in Crown Heights, Brooklyn. No one has to pass admissions tests to get in. I know this is a big issue in New York City, where admissions tests keep a lot of minority students out of elite public high schools, but this school didn’t have that barrier.

The idea was to prepare us for successful careers, offering high school and the first two years of college, all for free. There is a big focus on technology and how it will change our lives and careers. IBM helped start the program, in 2011. Many of us did summer internships at IBM.

Some of the kids raced through the program, finishing high school and an associate degree in just four years. Others, including me, took longer. But the time spent doesn’t matter nearly as much when you see it’s taking you somewhere interesting. Especially if you’re not spending money for it, or going into debt.

A lot of the education at P-Tech is based on building things. That made it so much more relevant for me. Some of the most memorable lessons came when we built stuff that didn’t work. Then we had to figure out what went wrong. One time, for example, a robot we built rolled on wheels we’d created on a 3-D printer. It looked promising, but when we tried it out, the wheels snapped. It turned out that our software was telling the wheels to roll in opposite directions at the same time. Oops. We fixed the issue and then the robot worked.

I’m not saying, by the way, that we can or should go through school without learning answers. But it’s so much more interesting when you can put your knowledge into practice. At an internship at IBM’s research center, in Yorktown Heights just north of New York City, my partner and I had to spend a few days studying the Python programming language. We were eager to learn it, as we knew we’d be using it for our projects.

Related: OPINION: ‘Tests may not be biased, but the system is’

Even outside of technology, P-Tech was more about coming up with answers than knowing them. In one life-skills class, we had to make presentations, much the way we would at a company. There was no right or wrong approach. We just had to explain our reasoning clearly and defend it.

That’s what I’m finding in the workplace. In my current internship, I work for the City University of New York, in tech support. It’s about figuring stuff out, why a computer system isn’t working, and then fixing it.

Eventually, I see myself working for a technology company. What I know now probably won’t be enough for that job. I’ll have to learn more. But now I have confidence that I can. The trick isn’t to know the answers. It’s to find the questions.

This story about building things and educational relevance was produced by The Hechinger Report, a nonprofit, independent news organization focused on inequality and innovation in education. Sign up here for our newsletter.

A graduate of P-Tech High School in Brooklyn and a tech-support intern at the City University of New York, David Denis earned an associate degree from the New York City College of Technology. He plans to complete his bachelor’s degree next. 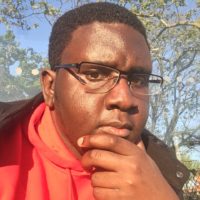