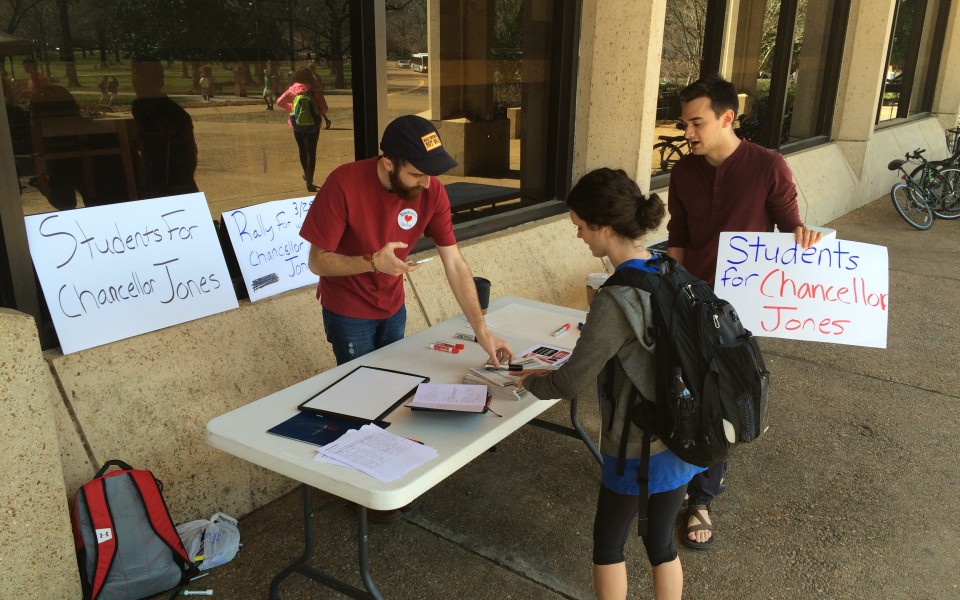 Chancellor Dan Jones contract not renewed, without much explanation for why

OXFORD, Miss. — Angry students held aloft red and white signs proclaiming their support for ousted Chancellor Dan Jones on Monday, urging their classmates at the University of Mississippi to sign petitions and attend a protest rally at the state’s flagship campus.

Many said they were upset by a trustee decision on Friday not to renew Jones’ contract. The sudden ouster has also resulted in an outpouring of alumni anger and faculty pushback.

“This is a guy who was doing right in my eyes, and because he was doing right and standing up for what he believes in, he’s no longer allowed to be in that position,’’ said Chandler McKinley, a sophomore from Raleigh, North Carolina.

The decision from the 12-member board that oversees the Mississippi’s eight public universities came with little warning or explanation, just four days after 66-year-old Jones had returned to work at the state’s largest public institution following treatment for lymphoma. In a Saturday follow-up statement, the board revealed that while they credited Jones with strong leadership, they had financial concerns about the University of Mississippi Medical Center, which Jones also oversees.

Students at Ole Miss spoke with passion and pride about why they support Jones, whose ouster is the latest example of a high-profile standoff between presidents and boards, including recent power-struggles at the University of Virginia and the University of Texas.

“You can easily have a conversation with him if you need advice, 24/7. He wants to know your name and why you’re here. He’s kind of like the dad of the family.”

In Virginia, the board that ousted President Teresa Sullivan in June 2014 against the wishes of faculty and student leaders ultimately reversed itself under pressure. At Texas, an attempt to oust President Bill Powers last July over allegations of irregularities in admissions while he was Dean of the Law School ended with an agreement that allowed the president to remain in office another year.

Despite student, faculty and alumni anger, the Board of Trustees for the Mississippi Institutions of Higher Learning (IHL) did not appear to be reconsidering Monday after meeting in executive session in Jackson.

Related: Soul-searching and frustration at University of Mississippi after statue vandalism

Although the board cited concern over the financial management of the University of Mississippi Medical Center as a reason Jones’ ouster, few details have been released to students to help them understand what happened.

Jones released a statement through the university in response, noting that he was “very saddened.” He said he believed his contract was not renewed because of his history of disagreement with the board over such areas as business decisions at the medical center and the process for the center’s selection of its vice chancellor.

Students said Jones had raised the school’s profile and was extremely popular on campus. On Monday, the student-run newspaper published an editorial entitled “We Believe in Dan,’’ and praised his efforts to make the campus more inclusive and improve a once contentious racial climate.

Summer Wigley, a 20-year-old student from Ridgeland, said Jones was popular with students because “he’s always made himself available. You can easily have a conversation with him if you need advice, 24/7. He wants to know your name and why you’re here. He’s kind of like the dad of the family.”

Ole Miss faculty drafted a resolution supporting Jones and calling for his reinstatement. A series of high profile alumni, including Archie Manning and John Grisham, also voiced their support for Jones over the past three days. And one donor threatened Monday to rescind a $20 million grant if Jones isn’t reinstated.

They trustees did not provide any further details. The Hechinger Report reached out to IHL but did not receive a response.

Related: Why the cotton pickers minstrel review is part of higher ed history

Students, meanwhile, took to social media to voice their displeasure. Many turned to Twitter, urging support with the hashtag: #IStandWithDan.

“I was so angry when it happened and I reached out to my Facebook friends to see if they were interested in protesting on IHL’s decision, and it turned into something so much bigger than that,” Felder said.

Felder and Borst also created a donation page to gather money for future protests against the decision.

“On Friday when the news broke and we saw the statement of IHL and later, Chancellor Jones’ letter, we were just very surprised in terms of what he’s done for this university and how he’s been repaid for that,” Borst said. “Since Friday, it’s kind of evolved and we’ve learned a lot more about their decision and it’s not very well substantiated.”

Supporters argue that Jones has done an exceptional job as chancellor.

“If you look at the track record he has, the numbers don’t lie,” sophomore McKinley said. “We’ve had huge increases in our enrollment, fundraising has been through the roof, and that didn’t just happen by luck.”

High school GPA and ACT scores for incoming students are at an all-time high at the University of Mississippi, and enrollment has steadily grown since Jones arrived.

Jones has also been a successful fundraiser: this year the school received $118 million in private donations, the third year in a row of donations of at least $100 million.

Jones took a stand against the school’s confederate past by requiring the school’s marching band to stop playing a transitional part of “From Dixie With Love,” during which students at Ole Miss football games traditionally chanted “the South will rise again.’’

“I stand by my chancellor. He’s done a fantastic job and we’re only going up from here,” junior Wigley said. “I just think the firing is very premature.”

Other students who are unhappy with the decision said they are angered by the board’s vague explanation.

Freshman Sydney Shamblin was among the students who said the board ended the contract because Jones did not bend to its wishes.

“I don’t think that we should have a chancellor that just goes along with whatever the council (board) says,” Shamblin said. “I think that’s why they’re getting rid of him – they want him to vote the way that they want. But his job is to vote for what he believes is right for the students.”

The group “Students for Dan Jones” will have a rally on campus Wednesday to protest the decision and put pressure on IHL to consider reinstatement.

“I believe they should re-sign that contract,” McKinley said. “If the wheel’s not broken, why try and fix it? He’s stuck by us in everything we’ve done as students, and now it’s time for us to return that favor.”

Kayleigh Skinner is a graduate of The University of Mississippi. During her time at Ole Miss she contributed regularly to the school’s publication The Daily… See Archive