The benefits children reap from Head Start, the preschool program for low-income families, disappear almost completely by third grade. While social support for children in the program is high, academic supports are low. Nearly all of children in the program live near the poverty line, more than half do not live with their fathers, and a third have a parent who is unemployed. These are the findings from two separate reports released Friday by the Administration for Children and Families (ACF), the federal agency that oversees the Head Start program. 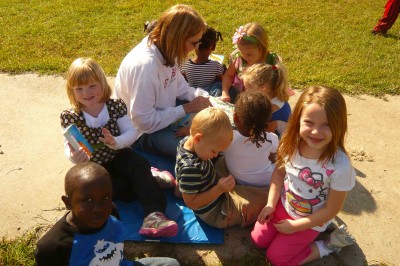 Students at a Head Start center in Mississippi. (Photo by Sarah Garland)

On their face, the pair of reports seem to paint a depressing portrait of a program meant to help the most vulnerable children in the country. But amid the bad news, the researchers who compiled the reports – independent contractors commissioned by ACF – also found a few glimmers of hope.

One of the studies, by the nonprofit Mathematica Policy Research, found that parents of children enrolled in Head Start became more engaged in teaching their children at home: They increased (slightly) the frequency that they told their children stories, played games, did arts and crafts and went to the library. The report also found that children in Head Start made significant academic progress during the year on skills like identifying numbers and shapes.

The second of the studies, known as the Head Start Impact Study, is the latest in a series of reports that has looked at the academic, social-emotional and health outcomes for Head Start students over time. Previously, the study had found that gains made in preschool for children enrolled in Head Start tapered off in first grade. The latest report shows that nearly all the health benefits and academic and social emotional gains were gone by third grade. There were also some negative outcomes, including a greater likelihood of being held back.

“One of the strengths of the Head Start program is the parent involvement and parent engagement,” said Linda Smith, ACF deputy assistant secretary for early childhood development, in a phone interview. “And it is borne out in the study.”

Yasmina Vinci, the director of the National Head Start Association, a nonprofit advocacy group, said in a statement that the Impact study showed that “Head Start does its job – it gets at-risk children ready for kindergarten in every aspect that the study measured.” She sought to place some of the blame for Head Start’s diminishing returns on K-12 schools, rather than the preschool program. “Their circumstances continue to hinder their success; circumstances including, but not limited to, the quality of their primary and secondary education,” she said.

The Mathematic study reported that the vast majority Head Start teachers in the sample received low ratings on instructional support based on a new classroom evaluation system that is launching in Head Start centers nationally this year, known as CLASS, even as they scored well on measures of emotional support and classroom organization.

Smith said Head Start’s low scores on instruction were not an anomaly – most preschools don’t do well in the academic domain, she said. But, she added, “We are looking at these scores very closely.”

“It’s an area we are looking at very seriously here in terms of how we are training our teachers and the curriculum they select and use,” Smith said.

The CLASS evaluations are part of a major effort by the Obama administration to improve the quality of Head Start. Among other changes, the administration is requiring programs that don’t meet certain standards to “re-compete” for their federal grants. The hope is that the competition will force improvements.

“The reforms of the last four years will ensure Head Start is doing more, so the benefits will be greater and last longer,” said Head Start Director Yvette Sanchez-Fuentes in a press release announcing the reports’ findings.

This year, 132 programs had to compete for their funding, including some of the biggest agencies in the country. The Head Start office previously said it would announce the winners this month, but officials said Friday that the results of the competition will not be released until the spring for legal reasons.

CLASS and another measure of academic quality were not used to evaluate programs during the first round. But for the next round, Head Start agencies must meet new academic standards to avoid losing their federal support. Smith, of ACF, said the agency would release a list of the next round of agencies that must compete in January.