At LEAP Academy, a public charter school in Southeast Washington, a roomful of 4-year-olds hunched over tables, quietly practicing their writing skills. Most can’t actually write entire words yet, so they scrawled the first letter and supplemented their stories with pictures.

When one boy instead covered his page with fierce black scribbles, Principal Laura Bowen leaned over his shoulder and told him to stop. “I don’t want any more scribbles,” she said. “I want a story.”

Such encounters are part of the new frontier as D.C.’s thriving charter-school movement expands into early childhood programs, where per-pupil funding is higher and, advocates say, early intervention might lead to bigger gains in academic achievement.

LEAP is part of the nonprofit KIPP chain, which started with just one middle school in Houston 15 years ago and now is the largest charter operator in the country. LEAP is among dozens of D.C. charters now offering preschool and pre-kindergarten classes.

“In the first generation of charters, I think most of the charters were middle schools, because a lot of people saw at-risk students in those years,” said Jack McCarthy, a charter school veteran who leads the AppleTree Institute, a District-based nonprofit group that began as a charter high school operator in 1996. AppleTree opened its first preschool 10 years ago.

“People are starting to realize that you can avoid a lot of the pain” of teaching students who are behind, McCarthy said. “It really dramatically reduces the number of children needing special education if you provide evidence-based interventions in the early years.”

Samuel Meisels, president of the Erikson Institute in Chicago, a graduate school that trains professionals in child development, says charter schools might bring imaginative ideas into the field. But he warned that there are potential pitfalls as charters, which tend to have an intense focus on academic preparation, expand into preschool. Charters are often known for their rigid classroom structures, and many early education experts advocate unstructured play as the best way for young children to learn.

“It isn’t something where you take the KIPP method and apply it to another age group and expect that it will work the same way,” Meisels said. “Some of those elements may be problematic for young children, so I only hope they are keeping that in mind as they move downward in the age range.”

Decades of research have shown that high-quality early education programs improve the academic abilities of disadvantaged children and also lead to better social skills. But research also has found that those benefits can fade over time. A 2010 study of Head Start, a federally funded program for low-income children, found that early gains in literacy skills tapered off by the end of first grade. Other research has tracked similar fade-out effects for other early childhood programs.

At Hyde Leadership Public Charter School in Northeast, test scores were low and enrollment was slipping, so it added pre-kindergarten three years ago. “If they don’t get this early education, they’re behind,” said Julita Brown-Dunn, a reading specialist who helped start Hyde’s pre-kindergarten program.

Another attraction for charter operators is the money avaiable.The per-pupil funding allotment for preschool is nearly $12,000; for pre-kindergarten, it’s $11,629. Elementary, middle and high schools, which are allowed more students per classroom, get an average of about $9,500 per student. 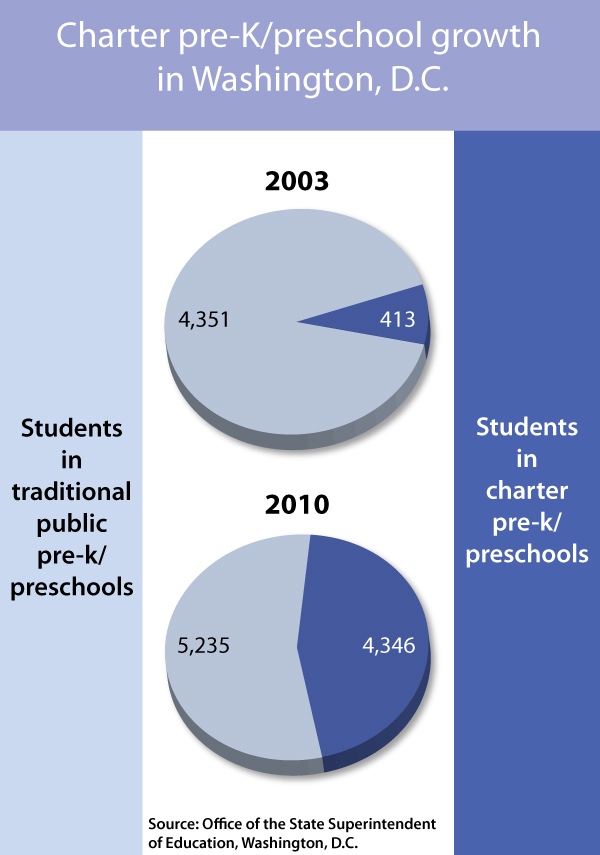 At a time of tightening budgets, Mary Filardo, executive director of the 21st Century School Fund, worries that D.C.’s struggling high schools are being shortchanged by increased spending on early education. “It’s not that education is necessarily a zero-sum game, but there’s not an infinitely elastic amount of money for education,” she said.

Early childhood advocates counter that money spent on early education can help the whole system — if the programs are strong, with significant time devoted to independent play rather than teacher-directed lessons.

Not every charter meets that standard. Jaqueline Scott, a pre-kindergarten teacher who works at Hyde, said she left another charter preschool where the academics were too rigid. She declined to name the school.

“It was kids in chairs with pencils, and it was very structured,” Scott said. “It should not be that way.”

KIPP leaders say its early education programs are different from what their schools offer in higher grades. Nearly half of the eight-hour school day for pre-kindergartners is focused on academic subjects, but many of the activities revolve around games and play, and there is time for naps and recess.

“When you come to school at 3 and 4 and 5 years old, you should be laughing all day and having a great time,” said Bowen, the LEAP principal who was overseeing the pre-kindergarten writing lesson. “If we’re burning kids out by 5 years old, we’re defeating the mission of what we’re trying to do.”

This story originally appeared in The Washington Post on April 3, 2011.