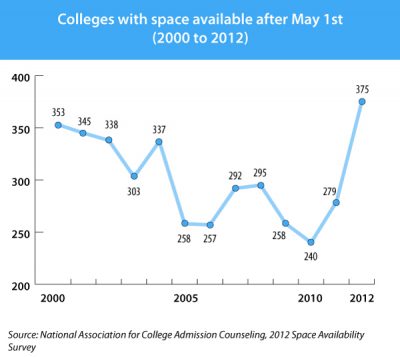 Harvard, Yale and a few other selective universities may be announcing record numbers of applications for the semester beginning in the fall, but higher-education officials are fretting about ominous signs that overall college enrollment is starting to drop.

More schools have space still available than at any time in at least a decade. Already, in the academic year just ending, many universities had to offer greater discounts just to fill seats. Yet fewer admitted students enrolled, and more than 40 percent of private colleges reported enrollment declines. Even community colleges—drowning in double-digit growth the past few years—experienced enrollment dips this year.

“We are seeing the beginnings of a cool-down,” said Barmak Nassirian, associate executive director of the American Association of Collegiate Registrars and Admissions Officers.

“Most of the apparatchik within higher education hope this is just a hiccup,” Nassirian said. “But I tend to think we have pushed the envelope as far as we can and we are in for a major realignment of some kind.”

The warning signs come at a time when policymakers from the president to governors are pushing to increase the proportion of the nation’s population aged 25 to 34 with postsecondary credentials, which the Organisation for Economic Co-operation and Development says has already fallen from first to 16th in the world.

While the number of students graduating from high schools has declined slightly since building to a peak of more than 3.3 million in 2009, the cause of the college enrollment drop-off is largely skyrocketing tuition and concern about debt, Nassirian and other higher-education officials said.

“I do think we’ve reached a tipping point in terms of what cost might do,” said David Hawkins, director of public policy and research at the National Association for College Admission Counseling, or NACAC. “The cost of college is really beginning to alarm families. And that creates a real threat to enrollment.”

The downward trend is especially squeezing private colleges, other than the most elite schools with the largest endowments, such as Harvard, which accepted a record-low 5.9 percent of the 34,302 students who applied for Fall 2012 admission. Princeton took just 7.9 percent of its applicants, and Yale 6.8 percent.

More than half of other private colleges, however, had to give more discounts this year than last to continue to attract students, the credit-rating firm Moody’s reports. Moody’s found that 41 percent saw enrollment fall anyway. More than a third had enrollment declines of at least 5 percent, according to the National Association of College and University Business Officers.

“When the going was good—the stock market was booming, unemployment was low—that sector did well,” Nassirian said. “Parents felt they could afford this.”

Now, he said, second- and third-tier private colleges with small endowments may themselves be in trouble. “Some of them are at risk over fairly short timelines,” he said. “These institutions will have increasingly greater difficulty attracting paying students who can balance their budgets. And five years of bad news can put you under. We are seeing early signs of long-lasting trouble.”

Already, at least 375 colleges report space still available for the fall, even at the end of the admission season, according to NACAC. That’s up from 279 last year, and the highest number this century. Seventy percent are private.

The percentage of accepted students who actually enroll in any university or college, which is called the “yield rate,” has fallen from about half to 41 percent in the last decade, NACAC says.

“We do want people to understand that this is an increase in applications, not necessarily in applicants,” said Hawkins. He said that what admissions officers call “application inflation” is partly driven by the universities to make themselves seem more competitive. It’s a practice insiders have given the sinister name “recruit to deny.”

In fact, along with price, the perception of increasing competition may be another thing keeping students from applying to, and enrolling in, college, said John Dysart, an enrollment-management consultant.

“That gets out there—‘Oh my god, there’s more people applying, I can’t get in’—and it might discourage people from the process,” Dysart said.

“Are we at a crisis yet? No, but the gap between what colleges and universities charge and what families can afford to pay is just going to keep growing,” Dysart said.

If that continues, he said, “It could flat-out make higher education not a viable option for some families.”

There are other signs of trouble. Community-college enrollment dropped one percent this year after climbing almost 22 percent since 2007.

The boom had to end sometime, said David Baime, senior vice president for government relations and research at the American Association of Community Colleges, though he said “there was also speculation that people just couldn’t afford it any more”—even at these comparatively low-cost schools.

States have cut the amount they spend on higher education, per student, by nearly 11 percent since 2010 to the lowest level since the 1980s, according to the State Higher Education Executive Officers organization, forcing the rest to be made up through higher tuition. One result is that the cost of attending community college rose nearly 9 percent this year, on average—and a significantly larger proportion of students have had to rely on federal financial aid.

Meanwhile, some public universities, including Rutgers and the campuses of the California State University System, have capped enrollment or are talking about doing so.

In California, where huge higher-education budget cuts have also resulted in double-digit tuition increases, the percentage of high-school graduates who go on to the state’s public universities has dropped from 22 percent to 18 percent in just two years, according to the Public Policy Institute of California. It said increasing numbers of California high-school graduates, including those who were accepted to the universities, are less likely than students in the past to enroll in college at all.

Students confirm, loudly and clearly, that their college choices are more than ever being driven by price. In an annual survey of freshmen nationwide by the Higher Education Research Institute at UCLA, a record 42 percent said cost was “very important” in their decision about where to enroll. Record numbers also said financial aid was a factor for them—and was so essential that not being offered such help caused them to turn down the top schools on their lists.

If things continue as they are, said Pryor, “it would seem the same circumstances we’re seeing now would continue to play—that is, students that are accepted to some institutions are going to decide to go elsewhere because of cost.”

This story appeared on Time.com on May 31, 2012 as part of an exclusive collaboration. Republication is not allowed.

Correction (June 7, 2012): An earlier version of this article stated that the average number of college applications sent, per applicant, is up 33 percent. The increase is actually about 30 percent.