JACKSON, Miss. – Two-thirds of Mississippi’s youngest learners are starting the year unprepared, according to results from a new test examining the reading skills of kindergarten students.

Kindergartners took the STAR Early Literacy exam during the first month of the current school year to gauge their reading abilities. Over 40,000 students from 144 school districts took the computer-based exam that measures what the students know as they enter kindergarten. It was the first time the state gave the test. 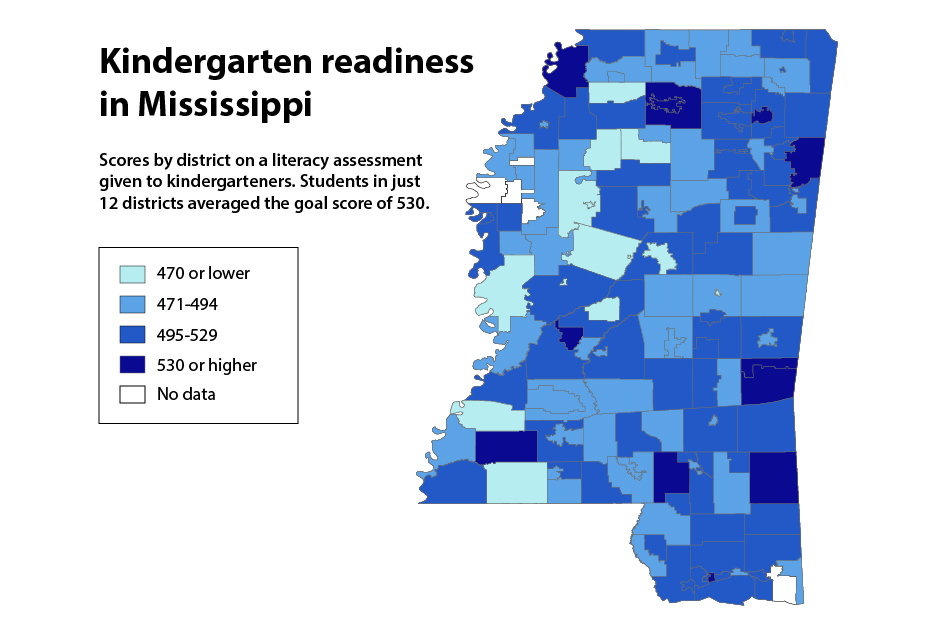 The results of the exam, created by Renaissance Learning and released Friday, come at a time when reading at grade level is a critical goal for Mississippi. This school year the Literacy Based Promotion Act was introduced into the classroom. Under this act, students who are not reading at or above grade level by the end of third grade will not be promoted. Many educators refer to this as “the third grade gate.”

Sixty-five percent of kindergarteners scored below 530, the “benchmark score” that indicates a student has mastered at least 70 percent of early literacy skills. This includes knowing the order and sounds associated with the letters in the alphabet and the ability to distinguish between upper and lower case letters.

Research from a four-year study of older data show that 84 percent of students who score a 530 or higher on this exam will go on to read at or above grade level by the end of third grade and be promoted on to fourth. The state average score was 501, meaning most students are unprepared for kindergarten when they begin school and are less likely to be proficient readers by third grade.

One reason Mississippi kindergarteners start behind, some educators argue, is that the state does not offer many Pre-K opportunities. Currently, Pre-K is state funded but serves just 6 percent of four-year olds in the state. Neither Pre-K or kindergarten is mandatory in Mississippi.

Kyle Snow, director of applied research at the National Association for Education of Young Children said students who enroll in high-quality early childhood classes will likely perform better in later grades because they are exposed to a structured learning environment early.

“A child coming into a structured Pre-K class will be exposed to words, letters and numbers,” Snow said. “You don’t know what a child’s experience will be if they don’t go.”

The state said some of the next steps are to provide more professional development for teachers so they can better prepare students, as well as to put more focus on high-quality Pre-K programs.

This story was produced by The Hechinger Report, a nonprofit, independent news website focused on inequality and innovation in education. Read more about Mississippi.

Kayleigh Skinner is a graduate of The University of Mississippi. During her time at Ole Miss she contributed regularly to the school’s publication The Daily… See Archive