More Americans than ever have earned bachelor’s degrees, putting them ahead of international rivals, but the gap is narrowing, according to new figures from the U.S. Department of Education. 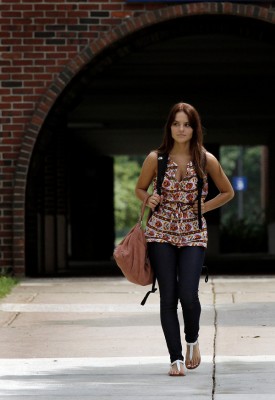 The department’s annual Condition of Education report, which tracks all levels of education, finds that the percentage of American 25- to 29-year-olds with at least bachelor’s degrees has climbed from 28 percent to 32 percent in the 10 years ending in 2010.

The number of bachelor’s degrees awarded annually is up 38 percent in the last 10 years, to about 1.7 million, and the number of associate’s degrees rose 63 percent to 900,0000.

That’s good news at a time when the knowledge economy needs well-educated workers, and state and federal policymakers are seeking to increase the number of people with university degrees.

But while more young Americans have at least bachelor’s degrees than their counterparts in other developed countries, their lead has shrunk from 12 percentage points to 4 percentage points in the last 10 years as rival nations increase their production of graduates.

Meanwhile, enrollment in American universities fell in 2011, the report shows, and of those who do enter four-year colleges, only 59 percent complete their degrees within even six years.

This is occurring at a time when student loan debt—the only form of debt that has increased since the recession—continues to rise. The new report confirms that it is hovering near $1 trillion.

Student loan delinquency is also climbing. In the third quarter of 2012, the most recent period for which the figures are available, 11 percent of student loans were at least 90 days past due.

The amount being spent by the federal government on financial aid for college students reached $146 billion in 2011, a fourfold increase in 10 years.

The United States spends $29,201 annually per full-time college or university student, more than twice the OECD average of $13,461.

With about 15.9 million of those students living in families that earn less than the poverty level, one in five public schools is now considered high-poverty, meaning that at least three-quarters of those enrolled qualify for free or reduced-price lunches. That’s up from one in eight in 2000.

Many students are leaving public schools for charter schools, whose enrollment has sextupled from 300,000 to 1.8 million since 2000.

Overall, however, public school enrollment is rising. Enrollment reached nearly 50 million in 2011, and is expected to hit 53.1 million by 2021.