Private, for-profit colleges have joined the march of institutions that appear to be lowering their tuition as enrollment flattens out and families become increasingly price conscious.

The average tuition paid by students at four-year, for-profit colleges, when adjusted for inflation, fell from $16,268 in the 2006-2007 academic year to $13,819 in 2011-2012, the independent think tank Education Sector reports, citing data from the U.S. Department of Education.

Education Sector research director Andrew Gillen says one reason for this drop is that students are seeking out lower-cost schools, pushing down the average tuition being paid. The other: that the schools are cutting their prices. 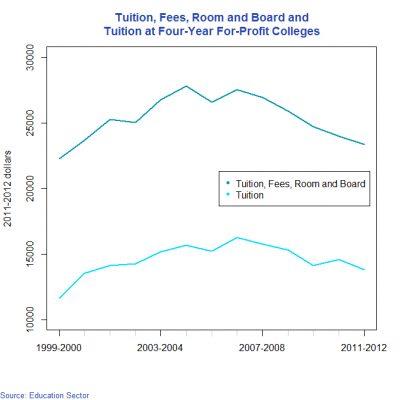 “It’s an interesting question because the for-profits are obviously focused on making a profit, so if they’re cutting tuition, there’s got to be something going on,” Gillen says. “Either they’re trying to build their market share or they’re trying to undercut their competitors.”

Some public and small private universities and colleges, too, are freezing or reducing their tuition in the face of pushback from parents and policymakers.

The average amount families paid for college, per student, fell to about $21,179 in 2012, down from a high of $24,097 in 2010, the loan provider Sallie Mae has reported. That’s because more have sought out less-expensive schools, or negotiated ever-larger discounts.

Sallie Mae found that two-thirds of families eliminated one of more colleges from consideration because of cost.

Meanwhile, to the consternation of higher-education administrators, university and college enrollment has been flat or down. Enrollment overall fell 2.3 percent in the spring, the National Student Clearinghouse reports, and a steep 8.7 percent at four-year, for-profit colleges.

Those students that are showing up at the doorsteps of the for-profits, Gillen says, “are gravitating to the lower-cost schools,” the federal data suggest. “And that’s going to put a lot of pressure on the rest of them to follow suit.”

What this means, he says, “is that this is happening across the board—that everybody is paying much more attention to the cost of the college they’re attending than they were in the past.” And if the private, for-profits are also responding to market forces, he says, “This could be a very wide-ranging trend that would affect all of higher education.”