BROOKHAVEN, Miss. — Last year, an amendment to the Mississippi Constitution that would mandate adequate and efficient funding of public schools — and the ability to seek judicial relief — was placed on the November 2015 ballot. It was called Initiative 42.

Soon after, the Mississippi House, long a bastion of anti-public school sentiment, passed an alternative to Initiative 42 to also go on the ballot. The implication of that alternative, 42-A, is that school funding should be tied to achievement.

This alternative will at best muddle the issue and most likely doom the initiative outright.

Only about 30 percent of student achievement comes from in-school factors such as teachers, principals and class size. Almost 70 percent comes from outside factors like access to resources. This imbalance becomes amplified in Mississippi, which ranks at the top in poverty, teen pregnancy and illiteracy.

If lawmakers wanted to make the biggest effect on student achievement, they would focus on those home and community factors that matter most.

However, to overcome these factors it would take a greater commitment of focus and resources than our lawmakers want to give.

So, the public school is asked to perform miracles and use its 30 percent effect to overcome the 70 percent effect outside school. Because most communities across Mississippi do not have the resources to fund their own schools, the state is asked to help out.

The Mississippi Adequate Education Program (MAEP) is the formula used by Mississippi to determine what resources to give schools to educate children. Basically, schools are funded by the state on the low end cost of what a ‘C’ or ‘Successful’ district costs to operate.

The important thing to remember is this formula is what the legislature decided on how it would fund schools.This was created to avoid a lawsuit over underfunding public schools.

Related: Q & A: Mississippi superintendent explains why he gave up his salary to help relieve ‘wretched conditions’ at his schools

Now, there are those who maintain money is not the answer. They claim by offering competition and choice — like merit pay, charter schools and vouchers —- student achievement will improve while lowering cost. And besides, they argue, any increase in school funding goes toward administration anyway, not the classroom.

Hogwash. The facts are:

— In a December report on school efficiency and funding, no clear factors were found between funding, efficiency, and achievement, other than poor districts require more money. In fact, districts scoring a ‘C’, ‘D’, or ‘F’ was spending MORE on instruction than ‘A’ or ‘B’ districts.

“Over 90 percent of Mississippi students attend public schools, but instead of investing in those schools lawmakers want to shift funding to sources that will only benefit 10 percent of students. This is a return to the days when schools were only funded for the affluent; poor and minority schools were neglected.”

— Teacher quality is very important, maybe most important, in a classroom. But evidence from other states demonstrates that about 80 percent to 90 percent of all teachers are comparable in effectiveness, with only a small percentage at the extremes (Master teacher and Ineffective teacher). So unless a child has a truly terrible teacher, she or he will have a quality teacher. But by telling teachers they are only valuable if they are in the top 1 percent to 5 percent (i.e., Merit Pay) you undermine and discourage teachers to the point it becomes difficult to retain or recruit any.

— Research demonstrates that charter schools, as a whole, are no better than than community public schools and in many cases are worse. A recent study in Ohio showed that most charters were outperformed by their public school counterparts. New Orleans Recovery District, which is held as a model for charters, scored a D in the most recent rankings. And for this, charter CEOs are often paid THREE TIMES what school principals are paid.

— School vouchers transfer public dollars to private schools with little to no oversight. Louisiana, Indiana, Wisconsin, and Washington D.C., which use vouchers extensively, report no real improvement in student achievement, no accountability for how public dollars are used, and no remedy when voucher dollars are misused. Even vouchers that theoretically sound good (Special-needs vouchers) are poorly-written to provide a backdoor to transfer public money to private schools with no evidence that student achievement improves.

— Mississippi only pays for 65 percent of what a school district needs to operate, but 85 percent of district costs go towards the classroom. So the legislature is not even fully funding the classroom, much less school administrators. But to the charge that administrator salaries are rising while teacher salaries are not, it’s simple: when a 30-year teacher retires, he or she is often replaced with an inexperienced teacher (saving up to one-third of salary costs), whereas when school administrators (who aren’t on salary scales) retire, they are replaced with an experienced educator for about the same salary. Basically, this is a wedge issue to divide educators and remove the focus off of underfunded schools.

Related: Vouchers may be the ticket out of public schools for kids with disabilities, but is that a good thing?

Elected officials claim they will spend more money on education, but not on fully funding schools through MAEP. Instead, the money will be “targeted”. What are the targets? Testing vouchers, charter Schools, merit pay pilot, private pre-K grants (NOT universal pre-K), and others. It’s a ruse.

Over 90 percent of Mississippi students attend public schools, but instead of investing in those schools lawmakers want to shift funding to sources that will only benefit 10 percent of students. This is a return to the days when schools were only funded for the affluent; poor and minority schools were neglected.

But at the end of the day, the argument about school funding and MAEP is simple: do you support a chance at a quality education for all students, that the purpose of schools is to prepare students to take their place in our society and be a contributing member? Or do you believe in a dual system, for the haves and the have-nots, and that money is wasted trying to educate the poorest, highest minority, economically depressed areas of our state?

Traditionally, Mississippi has held the latter; I work to try to make it the former.

Shannon Eubanks is the principal of the Enterprise Attendance Center in Brookhaven, Mississippi.

This story was produced by The Hechinger Report, a nonprofit, independent news website focused on inequality and innovation in education. Read more about education in Mississippi. 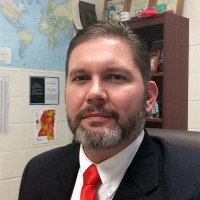 Shannon Eubanks is the principal of the Enterprise Attendance Center in Brookhaven, Mississippi. See Archive