Students in older grades spend large amounts of class time talking and arguing with one another in small groups. One third-grade teacher, Pamela Ochoa, encourages the children in her group of struggling readers to get out of their chairs and dance. Kindergartners in another room interrupt stories to predict what will happen next and ask about words they don’t understand.

Often at this majority-Hispanic school, the arguments and singing that spill out of classrooms are in a mix of Spanish and English.

“I don’t like quiet classrooms,” says Virginia Castro, the school’s principal. “Learning is noisy.”
During her four-year tenure at Geddes, Castro has led the school from struggling to highly successful. In 2008, fewer than a third of students passed state reading tests. Last year, the percentage passing more than doubled to 62 percent. The gains are even more impressive when compared to students in the rest of the state.

This story is part of a series written in collaboration with NBC for the annual Education Nation summit.

At Geddes, 87 percent of students are poor enough to qualify for federally subsidized lunches. More than half are still learning English. But in 2011, while 56 percent of elementary-age students in California were proficient or above on state tests for English language arts, two thirds of Geddes students were.

In math, 67 percent of California elementary-age students were proficient or above on math tests. In the same year; the figure at Geddes was 74 percent.

Getting children talking to one another is one of the several strategies Castro and her teachers have used to close the achievement gap between their children and those in more affluent schools. The special sauce at Geddes may be its dual-language program. Classes at Geddes are taught in Spanish for 90 percent of the day until third grade, when they transition to more time spent in English. 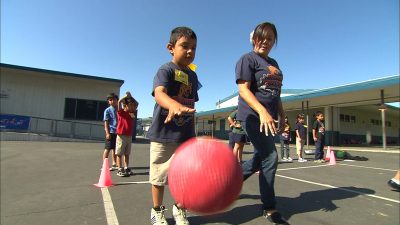 The research is mixed on whether bilingual programs in general make a difference for student achievement. When bilingual programs were prevalent in California in the 1990s, the gap between English learners and other students was wide. But research has also documented that bilingualism can benefit the brain. And done well, dual-language programs can be a key element in a school’s success, some educators and researchers say.

“It’s just absolutely incontrovertible that teaching children either by building on their primary language to get to English, or by continuing to teach them in their language that they already know while they’re learning English … has better long-term outcomes for the students,” says Patricia Gándara, an education professor at UCLA.

The Challenge: For English Language Learners, mastering the language is even more difficult if they struggle with their first language.

The Solution: At Geddes Elementary School in Baldwin Park, Calif., young students in the dual-language program are taught in Spanish 90% of the day until third grade. This approach has led to significant achievement gains, with 60% of third-graders scoring proficient or above in English language arts in 2011.

“There’s a lot of research now that shows that dual-immersion programs/bilingual programs are teaching kids to read better,” she added.

One reason the dual-language program works at Geddes is because it’s one part of a strong academic structure, school officials say. Castro is obsessed with data: Teachers give assessments every two weeks in math and reading to see how their students are progressing and where they might need help.

She also gives her teachers lots of time to plan their lessons and work together so they can learn from one another. Once a year, teachers can ask for a “wild-card day,” in which they spend the whole day planning lessons collaboratively while Castro hires substitutes to cover their classes. Classes are also kept relatively small, with an average of fewer than 20 students. California has had a class-size reduction program in grades kindergarten through third grade since 1996; Baldwin Park received $5.3 million from the state in 2008 to reduce the size of 550 elementary classes. But money for the program has since been reduced, and there is a debate about whether class size reduction programs improve student achievement.

And then there is Castro’s strong leadership. “Ms. Castro is obviously awesome and she’s the catalyst,” said Arturo Ortega, an assistant superintendent in the Baldwin Park Unified School District, which encompasses about two dozen schools in a city 20 miles east of downtown Los Angeles. “She’s been able to bring out leadership in her teachers, her staff and her parents.”

Dual-language programs are now relatively rare in California after voters passed Proposition 227, limiting the use of bilingual education, in 1998. Since then, the number of English learners taught in their primary language has dropped by half.

A handful of districts have kept bilingual programs intact, however, including Baldwin Park. Administrators say parents there clamor to enroll their children at Geddes, one of the district’s several rapidly improving schools, in part because of the opportunity for their children to learn in both Spanish and English.

“It’s important for me, because my children are from here. I’m from Mexico, and I want them to know their origins,” said Ana Lepe, speaking in Spanish. The 40-year-old mother of three has sent all of her children to Geddes because she also believes being bilingual will help them get better jobs in the future.

Her youngest child, Cesar, 7, says juggling both languages can be difficult, but, he added, “I feel proud of myself, because I’m learning a lot of things.”

The program also helps parents, many of them monolingual Spanish speakers, feel more welcome, which in turn helps Castro foster another key element to her success: Dozens of Geddes parents—more than a third of whom never graduated from high school — are now actively involved in their children’s education, helping with homework and volunteering at the school, she says.

“Parents are the core,” Castro said. “They’re the first teachers that a child is going to have.”