FARMINGTON, Maine — It was well after homeroom had begun in most schools in central Maine when teacher Juliana Rothschild knocked on the front door of a student’s house. The student, Jessica Cousins, wasn’t in trouble for skipping school. Instead, school was coming to her. Rothschild transformed Cousins’ kitchen table into a makeshift workstation. They set up two laptops and began their weekly, three-hour class.

Cousins says she is “not a book person.” During her childhood of dealing with family strife, which took her to towns across rural Maine, rarely staying at a school for longer than a year or two, learning was never a priority. “It was never something I looked forward to — all day, every day,” she said. She dropped out shortly after her 16th birthday.

But last summer, Cousins’ mother-in-law told her about Threshold, a program developed by a Maine charter school aimed specifically at students who’ve dropped out, and she enrolled at age 18.

Rothschild serves as part teacher, part tutor for the program, visiting her 10 students’ homes for one-on-one classes each week. She designs individualized assignments that she hopes will engage students who’ve often struggled in traditional school settings.

Threshold is akin to home-schooling, only with certified teachers, overseen by a brick-and-mortar school, who provide in-person lessons. The teachers use technology to keep in touch with students daily. The idea is to create an alternative to the day-to-day structures of school — the school bus and the 7-hour school day — that make learning nearly impossible for specific students, including teen parents, youth with full-time jobs or kids who’ve suffered from bullying or severe anxiety. It’s an ambitious idea to reach students that have fallen through the cracks and provide them with a path forward to a diploma.

Related: Held back, but not helped

The program’s creator, Emanuel Pariser, is a longtime Maine educator who has worked with at-risk youth at private and independent schools in the state. But he realized that even in settings where those students could be given more freedom and individualized attention, it was still difficult to reach certain kids. He spent years developing Threshold around a new theory: If teachers could visit students’ homes, perhaps they could reach those kids.

“With Threshold, we’ve kind of figured out a home-visiting model where we’ve taken out some of those variables that have kept kids from engaging in school,” he said.

Overseen by the Maine Academy of Natural Sciences, a public charter school in rural Hinckley, Maine, Threshold has just two teachers who travel to students’ homes across an area of more than 200 square miles in central Maine. Of the 20 students enrolled in the program, two are teen parents. For more than half of the students, part of the reason for enrolling was “school refusal” — severe fear and anxiety around going to school every day.

Mary Wimmer, a school psychologist in Wisconsin and expert on student anxiety, estimates that 1 to 5 percent of all students have school refusal. Wimmer says there’s no single cause for this anxiety, but in the most severe cases, students will drop out.

Related: What happens when a regular high school decides no student is a lost cause?

“What we’re experiencing is a lot of students who, either in their family, or themselves, there’s a trauma background,” Pariser said. “Also, school hasn’t necessarily been the safest place for them. Some students might have been harassed or bullied. And they’ve just started to withdraw from the social contract, really. They’ve just started pulling away.”

One student in the program, who didn’t want her name used for privacy reasons, said that bullying ultimately led her to drop out from her former school. She described walking through the front door every day to a barrage of harassment and name-calling.

Eventually, she stopped showing up.

Threshold meant she could go back to school without the fear. “Not having to worry about how I was going to act … like, ‘If they do this, I’ll do this.’ Thinking about every situation in advance.”

At Threshold, program staff get to know students through an extensive initial interview process, learning about their backgrounds, previous academic experiences and what kinds of requirements they still need to graduate. From there, teachers design individualized projects to help each student meet standards. Then they communicate through email, phone and video chat, in addition to home visits.

Teacher Juliana Rothschild said that because she can individualize projects for each student, she can tie their interests into their learning. She gives one example of a student who disliked writing papers. However, she said, he had a passion for breaking down and rebuilding old BMX bikes. Together, she and the student designed an English assignment around that interest — a tutorial slideshow about his bike-building process.

“So that is speaking and listening,” she said. “English-language arts, informational text, instructional writing.”

Few teenagers she knows will “dig deep into the quadratic formula” out of just “pure motivation,” Rothschild continued. “Kids will work for someone they care about, who they know is their ally and who they know respects them.”

But even with that level of personalization, academic growth is often slow or nonexistent for weeks at a time. In late March, teacher Rothschild made another weekly visit to Jessica Cousins’ house in rural Maine. A few weeks earlier, the two had started an online, dual-enrollment English course at a local community college that they hoped would allow Cousins to fulfill most of her graduation requirements.

Related: In rural Maine, a university eliminates most Fs in an effort to increase graduation rates

However, when Rothschild arrived, Cousins was struggling. Cousins had needed emergency surgery about two weeks earlier. On top of that, she had started a new job with long hours, leaving her with little time for schoolwork. In her first college class, Cousins was already behind.

Rothschild asked Cousins how she was feeling about the course, and if she could handle the workload on top of her job. Cousins told her that after a turbulent few weeks, passing the course now seemed like less of a priority.

“So there are times for them that they’re going gangbusters, doing a great job. And really making a lot of progress. And then times where it sort of falls apart.”

But Rothschild wouldn’t let her leave the course that quickly.

“I’ve seen a really different story from you. I’ve seen creativity. I’ve seen focus. I’ve seen really good work,” she said. “You tell amazing stories. You write well!” The encouragement convinced Cousins to stick with the course, even if it meant video-chatting with her teacher late at night to finish assignments.

Teachers say that in some cases, they serve more as social workers for students in the Threshold program, helping them deal with medical needs and even homelessness. For teenagers with severe anxiety, the school has recently brought in mental health experts and formed parent groups on its campus to provide extra support.

“There’s a lot of things outside of the school life. Just family, health. Health of their family, or their own,” said Maine Academy of Natural Sciences principal Tonya Arnold. “So there are times for them that they’re going gangbusters, doing a great job. And really making a lot of progress. And then times where it sort of all falls apart.”

According to a January report from the Maine Charter School Commission, only 41 percent of Threshold students have made “steady progress” toward their goals through the program’s first year. Meanwhile, 18 percent of students “have been mostly unengaged — cancelling most appointments, not turning in any work.”

Researchers have been skeptical of similarly mixed results from other approaches that, like Threshold, rely heavily on technology, such as blended learning programs, in which online work is integrated into classroom settings, and virtual schools, where students primarily learn through online learning platforms.

Touro University associate professor Michael Barbour has been critical of the increased use of these practices — particularly in statewide cyber charter schools — because their outcomes often lag behind those of traditional programs. Yet Barbour sees promise in programs like Threshold that target a specific population of students.

“Because you’re trying to personalize it to students’ needs,” he said. The in-person attention and flexibility make the program different from a lot of school technology efforts or cyber charters in which students mostly interact with a computer, Barbour added.

Mary Wimmer, a school psychologist in Wisconsin and expert on student anxiety, estimates that 1 to 5 percent of all students are affected by school refusal.

While some districts have created blended-learning programs for students who’ve dropped out, the school says it’s unaware of any other public schools that have attempted a home-visiting model like Threshold’s.

Director of instruction Emanuel Pariser suggests one reason the program may be unique is that many schools, already strapped for resources, are reluctant to take on students that could hurt their ratings.

“There’s a tremendous disincentive to working with these kids,” he said. “They’re not going to be boosting a standardized test score. They’ll be in and out, so they’ll increase the dropout rate. And the school gets punished with this. And, basically, there’s a push away from dealing with them.”

But even with Threshold’s mixed results, he’s encouraged.This coming fall, the school is planning to double Threshold’s enrollment from 20 to 40 students, with more resources going toward a social worker to spend time with students and families. Pariser says that four students have already graduated since the program began last year, and three others are taking early college classes.

“And a high school diploma is just a real necessity in the world that we live in,” Pariser said.

“We need to have these people pitching in and being productive citizens, even if it’s just holding a job, having a family, supporting it,” he said. “But even more, we want them to feel good about themselves. And what they can accomplish.”

Related: A little girl’s school helps her deal with trauma at home

For student Jessica Cousins, graduation is likely still months away. But the 18-year-old is already thinking about life after high school. She and her teacher have browsed the internet for brushes, nail tips and adhesives — tools for cosmetology school, to which she plans to apply after graduation.

“I really got to get on the hustle with my schoolwork,” Cousins said. “But I’m still excited that there’s a possibility that, come August, I can get that diploma.”

This story about high school dropouts was produced by The Hechinger Report, a nonprofit, independent news organization focused on inequality and innovation in education. Sign up for Hechinger’s newsletter. 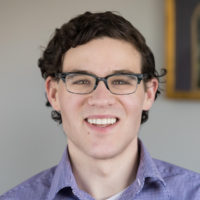 Robbie Feinberg is the education reporter with Maine Public Radio, where he covers everything from childcare to adult education. His work has aired on radio… See Archive