Psychologist Larry Rosen laments the fact that technology is driving us all to distraction. This past weekend, he spoke at a Hechinger Institute seminar for education reporters, which focused on how digital media are transforming teaching and learning in U.S. schools. The seminar, held in Chicago, was made possible by support from the John D. and Catherine T. MacArthur Foundation.

In a forthcoming book, iDisorder, Rosen argues that all our tech gadgets and applications are turning us into basket-cases suffering from versions of obsessive-compulsive disorder and attention-deficit syndrome. 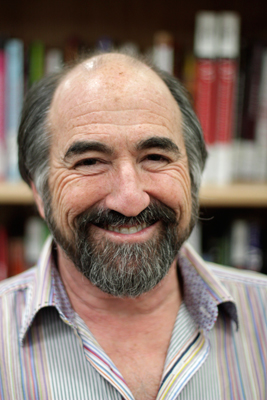 “Kids are thinking all the time, ‘Oh my god, who texted me? What’s on Facebook?’” says Rosen, a professor at California State University-Dominguez Hills. He says the average computer programmer or medical student can only stay focused on a task in front of him- or herself for three minutes.

Rosen has suggestions for fighting back, and some of them are counterintuitive. Instead of resisting the urge to text, check Facebook or watch a YouTube video, Rosen says just do it. That’s right: Cure the tech disorder with a dose of more technology!

Rosen calls it a tech break. But rather than taking a break from technology, you give yourself permission to embrace technology for a particular amount of time, be it one minute or 15. “It works amazingly,” he says.

Here’s why: If your brain keeps thinking about a text message you need to return, it’s better to send that text to get the nagging impulse out of your head. Once you stop thinking about sending that text, then you’ve literally freed up space in your brain to focus on more important things, like solving the global energy crisis or creating world peace. Or, just getting that research paper done.

The trick is to be disciplined and only take tech breaks at predefined intervals. One example would be to work hard for 10 minutes, and then allow yourself one minute to check email. For a child doing homework, Rosen suggests rewarding the child with 15 minutes of tech time for each half-hour of focused study. Rosen advises giving the child an option of spending the 15 minutes immediately or accumulating it for later use. After all, you need more than 15 minutes to get into a good video game.

Rosen’s theory has interesting implications for schools. Would kids be more focused and productive if teachers told students to take their cell phones out of their lockers and check their texts in the middle of every class?

Fortunately, there are other effective ways to reset the brain. Rosen lists a bunch: listening to beautiful music, looking at art and practicing yoga. Or going outside for a hike.