Excited to be back at his alma mater, the University of New Hampshire, Ed Farrington flashed bright-colored pie charts and graphs before a group of business students in what he considered a forceful presentation about the need for them to start saving early for retirement.

An executive vice president at the investment company Natixis Global Asset Management, Farrington was surprised to find his audience of millennials unmoved.

Then a student approached him at a reception afterward and told him why he and his classmates are largely indifferent to employee benefits such as 401(k) contributions: They have so much student loan debt to pay off, it will be years before most of them can even think about retirement savings.

“That stopped me in my tracks,” Farrington said.

He drove back to the company’s office in Boston and quickly “sketched out a plan” with his colleagues for Natixis Global to help its employees with their student debt. Starting in July, the company will offer employees up to $1,000 a year toward paying off their student loans, for a maximum of 10 years.

College loan repayment benefits like that are available to only a small proportion of American workers — about 3 percent, according to the Society for Human Resource Management. But they’re growing fast.

“This is the future,” said Bruce Elliott, the society’s director. “Employers that don’t listen to this generation do it at their own risk.”

The loan repayment benefits can take different forms, and some are managed by third parties.

One such company, Tuition.io, debuted three years ago to help consumers manage their loans, and now handles student loans directly, working with employers to contribute $100 to $200 a month toward reducing employees’ debts. Its clients include Fidelity and Chegg.

Related: Visiting a country where it’s almost impossible to default on college debt

“It’s kind of like paying a 401(k),” said Gradifi CEO Tim DeMello. “The money comes to us and we channel it to the loan agencies.” The employers contribute toward the principal on the loan, and they pay Gradifi a small sum per employee for the transaction, DeMello said.

“My education was worth my debt, but I knew that for a long time all my money would be going toward paying it off.”

Recent graduate Alanda Povroznik, whose employer is helping her repay her loans

Employer contributions to pay off student debt could prove popular — and good for the economy. A Harvard University study found that 42 percent of millennials have college debt, which  the nonpartisan foundation New America reports has climbed 20 percent in just four years. The White House says millennials are saving less as a result, are less likely to buy homes and are putting off getting married.

Meanwhile, said Elliott, employers are looking for new ways to recruit top talent for the 200,000 jobs being added each month. “The economy is moving from a buyer’s to a seller’s market,” he said.

Gradifi’s first client was PricewaterhouseCoopers, 80 percent of whose 46,000 U.S. employees are millennials. “We need to be attuned to their interests,” said the firm’s U.S. and global talent leader, Michael Fenlon. “Benefits evolve and we need to keep up.”

PwC has started offering those workers up to $100 a month toward student-loan repayments for a maximum of six years, or until an employee is promoted to manager.

For now the contributions have been coming out of employers’ pockets. But as interest in the benefit grows, its adoption might be helped along by a little-noticed bill in Congress that, if passed, would allow companies to claim the benefit as a tax deduction.

Whether it will help the people who need it most, however, is hotly debated.

Some critics say that offering student-loan repayment as an employee benefit deflects attention from the real problem with these loans: high interest rates. “It’s all well and good that employers are making contributions, but the real killer is the high interest on the debt,” said Stephen Dash of Credible, which helps students refinance their loans.

Offering repayment benefits also won’t necessarily solve the problem of student-loan defaults. One in five federal loan borrowers has defaulted, the U.S. Department of Education reports — a proportion that has fallen slightly over the last year, but still represents more than $121 billion  of loans on which no payments have been made in 360 days or more.

Those who are defaulting on loans are also not likely to be the employees of financial investment companies, consulting firms or other large companies, said Alexander Holt, an education policy analyst at New America.

“There’s this idea that employer contributions would decrease defaults on student loans, which isn’t true,” said Holt. “The people defaulting are those who leave college without graduating, or graduated and are unemployed.”

He said: “There is a crisis, but not for those working for companies. They don’t need help. They’ve got jobs.”

Related: Candidate’s comment reopens controversy over whether college is worth the cost

Some borrowers, on the other hand, said having the perk is a relief.

Alanda Povroznik graduated from the University of Wisconsin at Eau Claire last year with a degree in graphic arts and owing $35,000. She said she knew that “the arts wouldn’t be the highest-paying field and that it’d be rocky at first.”

Now she works as an e-marketing assistant at Powertex, a company that produces apparel and merchandise. In June, the company will start contributing $100 each month toward paying down the principal of her debt; Povroznik herself pays $350 each month. That’s a big help for someone on a salary of $35,000 a year, she said.

“My education was worth my debt, but I knew that for a long time all my money would be going toward paying it off,” Povroznik said.

That’s exactly what Farrington and other employers say they want to counter.

Adding student-loan repayment as a benefit could help employees shave as much as three years off the lives of their loans and save $4,100 in interest, the financial services review company Nerdwallet found — and make recent graduates more confident about moving on with their lives.

“We want to see our employees plan their financial security,” Farrington said. “We don’t think you have to wait until all your student debt is paid off.” 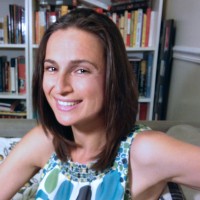 Luba Ostashevsky is a contributing writer to The Hechinger Report. She is also the managing editor of This View of Life, a magazine about human… See Archive