In schools, we tell all children that they can be anything they want.

It’s a striking irony that the leaders of our school systems — district superintendents and state chiefs — overwhelmingly are white men.

A report that we at Chiefs for Change are releasing today takes a hard look at this issue and offers solutions that every school system and leader in America can put into action.

When we committed to developing a prepared, diverse cadre of leader-candidates dedicated to student-centered visions of change, we saw an encouraging number of candidates of color earn top jobs.

Then we looked at how many women had ascended to chief positions and the result was a punch in the gut. In response, we’ve spent the last year developing a leadership program specifically for women in education.

The new report is part of that response.

Women make up the vast majority of the education workforce, and based on our count of systems that our members lead, they remain a majority through the ranks of administration and top leadership teams. Yet they represent only about a third of district superintendents and less than half of state chiefs. For women of color, the numbers are even more troubling.

The inequities hit us hard, not just because of the current landscape but because we found that even among our members, 83 percent of our men were stepping into superintendent searches, compared with just 23 percent of the women.

Far too many highly effective, talented women are not even vying for the most senior positions.

Far too many highly effective, talented women are not even vying for the most senior positions.

On the first front, we created an entire thread of women-only programming for our Future Chiefs. They have told us it’s the only such network they have. And while I’m hesitant to ascribe cause and effect, I’m delighted that the numbers have improved significantly as we’ve doubled the percentage of women candidates from our programming who have applied for the top jobs.

The second front resulted in the report, which shines a light on the problem and on solutions that can be implemented more broadly. And while it’s inarguable that some of the factors that hold women back are deeply embedded in our society, others are in the power of leaders to change immediately. Mayors, school board members, governors and others in every state and community must take concrete steps to effect change. Here are some key findings:

Intentional preparation and networks: Men have always had strong networks to help them move up. Women need to be seen and supported, through not only mentors but active sponsors. Likewise, school systems must widen leadership searches so they capture and cultivate the talented women working hard at the school and cabinet levels, providing all new chiefs with coaching from seasoned leaders once they are in the roles, and demanding that search firms identify multiple female candidates and candidates of color for every chief search.

Family-friendly policies: Too often, structural roadblocks prevent leaders from pursuing or staying in the superintendent or state chief seat. Addressing this could mean limiting evening and weekend meetings, offering child care and related transportation, helping with spouse/partner job searches, and creating compensation packages that include benefits that explicitly attend to the health and well-being of the chief. There is no reason why the role of a chief — who oversees schools for the benefit of children and the well-being of a community — should be at odds with the care of children or a healthy individual lifestyle for the person sitting in that position.

The glass ceiling for women in education is not merely a problem of fairness, of representation or of opportunity, though it is all of these. By squandering the potential of many of the nation’s most talented education leaders, we are depriving children and families of vision and energy that could serve, and change lives for, millions. That’s an unacceptable price — especially when so many solutions are in front of us.

This story about women leaders in education was produced by The Hechinger Report, a nonprofit, independent news organization focused on inequality and innovation in education. Sign up for our newsletter.

Julia Rafal-Baer is the chief operating officer of Chiefs for Change, a bipartisan network of state and district education chiefs. A former assistant commissioner at the New York State Education Department, Rafal-Baer earned a Ph.D. in education policy from the University of Cambridge, where she was a Marshall Scholar. She began her career as a special-education teacher in the Bronx. 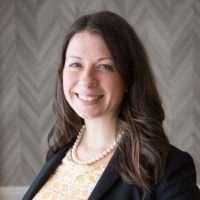 Julia Rafal-Baer is the COO of Chiefs for Change, a bipartisan network of state and district education chiefs. A former assistant commissioner at the New York State… See Archive