In June this year, 25-year-old Michael Omari — better known to his fans as Stormzy — headlined Glastonbury, the largest music festival in the world.

In the United Kingdom, Stormzy is riding high at the top of the charts, spearheading a wave of homegrown rap. In a triumphant televised performance, Stormzy — the first black British man to headline the festival — sealed his position as one of British music’s superstars.

A musician with a social conscience, Stormzy name-checked a list of over 50 up-and-coming rap artists from the stage. Grime, the high energy rap genre that emerged from the U.K. underground more than 15 years ago, has now been fully embraced by the mainstream.

At Youth Music — a U.K. charity that funds music-making projects for those aged 0-25 — we are guided by young people’s needs and interests. When reimagined to become more relevant to and inclusive of all young people, music education in schools can help students with the issues they face in today’s world.

In our Sound of the Next Generation research, young people told us that their favorite artists are the world-conquering Ed Sheeran, girl group Little Mix and reigning champion Stormzy.

In the 350 projects we fund each year, which mostly take place outside schools, young people get to guide their own learning, making the music they enjoy.

It seems like stating the obvious to say that young people love music. It’s such an integral part of growing up. But young people who participate in our projects often contrast their Youth Music experience to the music they make in school.

In school, they’re given less autonomy over their own learning, and it’s often disconnected from their musical lives. Decreasing numbers of young people are studying the subject. Exchanging Notes — a four-year research project conducted in collaboration with Birmingham City University — was our opportunity to address this: bringing community music organizations together with school music departments so that each could learn from the other.

The vast majority of young people go to school, so having opportunities to access music education there is essential. But it’s a tough time for music in U.K. schools, with budget and staff cuts. Music teachers work long hours, often in isolation, while juggling many competing demands.

The Exchanging Notes program was designed to explore the educational and wider developmental outcomes for young people at risk of exclusion and low educational attainment. The young people who participated in the program took part from the ages of 11 to 15. Bringing the expertise of teachers together with the expertise of arts-sector music leaders had the potential to provide a diverse and modern music curriculum that schools would be unable to provide on their own.

This wasn’t always an easy project. Exchanging Notes took place at a time when new qualifications for 16-year-olds were being introduced, placing greater focus on attainment in core subjects and, as a result, devaluing the importance of music and other art forms in the curriculum. The staff and partnerships all had to be resilient in the face of many challenges.

The research found that:

Young musicians developed new patterns of social interaction through establishing trusting relationships with other young people and adults. This social development acted as a springboard for a range of other learning outcomes and instilled in young people a greater sense of resilience to navigate life’s challenges. At the end of the program, they had clear ambitions for the future, with music usually playing a central role. An important factor: that the type of music explored in the curriculum wasn’t imposed on young people. Instead, it was decided and delivered with them.

The U.K. government’s Department for Education is currently designing a “model music curriculum” for schools. We wrote an open letter to the Education Minister, explaining that this model offers a creative, participatory and social approach to music that gives young people the opportunity to shape their own curriculum — driven by the music they’re passionate about.

Exchanging Notes has cemented our view that music in schools has the power to help young people with some of the big issues facing them today — mental health, isolation and social inequality. But only if it’s reimagined to become more relevant to and inclusive of all young people.

When our research hit the headlines in Britain, there was outrage from some commentators, who interpreted our message as “charity tells schools to ban Mozart in favor of Stormzy.” We’re not saying that the history of Western music needs to be thrown out. Stormzy himself tweeted,“The British media just got me beefing Mozart. I do not want to beef Mozart. Mozart is my guy. Peace.” We’re just saying that young people engage with music education more when it’s relevant to their interests. And right now, a lot of young people are very interested in Britain’s biggest rap star.

This story about U.K. music education was produced by The Hechinger Report, a nonprofit, independent news organization focused on inequality and innovation in education. Sign up for our newsletter. 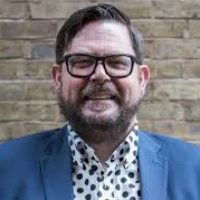