I had always envisioned myself becoming a musician one day, but until this summer I’d never realized I could pursue music as a vocation, as opposed to just a passion project. Last spring, I began searching for a summer job, preferably one that paid and, ideally, one in the arts. At the same time, I understood that the probability of finding a paid summer job in the arts, as opposed to a volunteer position, was slim-to-none.

As I explored possibilities, a Boston Private Industry Council career specialist referred me to the Actors’ Shakespeare Project, a Bloomberg Arts Internship (BAI) worksite. For me, the appeal of the BAI program was solely found in the experience at a worksite. This made working as an artist the next step in my exploration of the field, not only for the experience, but also for the access to working professionals. I wanted to learn about the realities of pursuing art as a career and what that would look like from the perspective of people in the business.

Going into my internship, I was aware of my role and what was expected of me, but the actual experience was much more intense than the job description had suggested. My job was to create the sound design for the Summer Youth Intensive program of the Actors’ Shakespeare Project, which puts on a final show at the end of July every year.

While I had 11 years of music experience under my belt, I had no experience with sound design, and the show was set to open only two-and-a-half weeks after my first day! That was nerve-wracking, to say the least. I had come into the project with the idea that I would be composing music for the show, but I quickly realized that this goal was unwise given the time constraints. Instead, I composed small themes for the different scenes, and then supplemented those themes with sound effects. Since the program’s participants were putting on a production of Shakespeare’s The Tempest, the sounds included crashing waves, beach noises and spooky magic.

Designing the sound for a show gave me an experience I’d never had before: making music without being on stage. While this may not seem like a big deal, being able to make music without all of the stress of being the center of attention was quite liberating and made me think about creative professions more suited to my personality.

Related: OPINION: In hip-hop, educators find a bridge to Shakespeare

As a morning person on the more introverted side of the spectrum, I find that performing at night can be draining. By being in a place where people are doing creative work as professionals, I was able to see the possibilities for a creative career without the creative sleep schedule. Seeing these possibilities made me want to explore other professions that involve being creative but behind-the-scenes — perhaps songwriting, sound engineering or even the music business. Along the way, I made networks of friends and connections with amazing people who are also drawn to the arts.

After my role in the production of The Tempest was complete, I began a new one helping the Actors’ Shakespeare Project prepare for the upcoming professional season. This part of the internship has been a more office-based job experience, but I think that this too will help me gain new perspectives around creative work and the administrative tasks (e.g., collecting data, writing grants) that allow us to undertake creative work.

All in all, I think that programs like these are vital for students like me who are interested in the arts, as there aren’t many apprenticeship-style programs out there — especially not ones for high school students. These internship opportunities allow students to immerse themselves in an actual arts profession, gain insights about business acumen as it relates to creative work, and learn more about their own interests and ways to pursue them. If nothing else, students can find clarity on whether they’d like to pursue a career in the arts at all.

This story about internships in the arts was produced by The Hechinger Report, a nonprofit, independent news organization focused on inequality and innovation in education. Sign up for our newsletter.

Accepted by Massachusetts College of Liberal Arts currently in a gap year doing a Praxis Internship, Eleasah Whittaker is a graduate of a graduate of Boston Day and Evening Academy and a former intern at Actors’ Shakespeare Project, as part of the Bloomberg Arts Internship program in Boston facilitated by EdVestors. 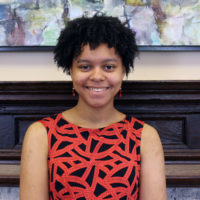 Accepted at the Massachusetts College of the Liberal Arts and currently in a gap year doing a Praxis Internship, Eleasah Whittaker is a graduate of… See Archive