These were the comments and questions I endured from classmates and faculty.

They didn’t quite understand the confidence of a young black girl using her voice to implement change around her.

Growing up in California, I was never afraid of being outspoken. In fact, it was my talent. Throughout elementary school, I was always known as the girl who talked a lot and turned simple conversations into debates.

This was because I was passionate about expressing my concerns as a way to get the change I was looking for.

One day in fifth grade, I took into my own hands a concern that was particularly important to me — and got my classmates to help me. On a piece a paper, I wrote “Black History Month.” I asked my peers to sign it if they agreed that we should celebrate Black History Month at our school. I ended my lunch with over 50 signatures.

I then presented the paper to my principal. He sat there in silent shock, and then uttered the words, “This is a petition.” I replied “Yeah,” with no idea what a petition actually was.

Ever since, starting on February 1, students get on the intercom to read a quotation from a successful black influencer (current or past) and later reflect on the meaning. This was the launch of my civics engagement.

People around the country talk a lot about the importance of civics education, how youth are the future and how we can effect change to create a stable and improved country.

But what are we doing to get students, and citizens in general, civically engaged?

What outlets are we providing for students to gain greater knowledge about our democracy? About voting?

And why is civics education still lacking in schools?

I was lucky enough to be born outspoken, to experience being heard by leaders at my elementary school, and later to be formally introduced to the importance of civic engagement. In seventh grade, I took a Generation Citizen class. Generation Citizen is a nonprofit, nonpartisan civic-education organization that works to ensure students grow to become engaged citizens in their communities and change-makers in our democracy.

Related: Go vote. The best civics lesson requires you to leave the classroom

For 10 weeks, Generation Citizen came to my school and taught us a little bit about our democracy as part of English class. We practiced being civically engaged citizens, and in the process I realized that I was different from a lot of my peers.

“Throughout elementary school, I was always known as the girl who talked a lot and turned simple conversations into debates.”

While I was actively engaged in my community, my peers didn’t believe they could create change as students and youth. Many of them felt like they were going to be ignored, powerless compared to the adults in the world.

Others felt insecure about the topic of civic engagement because they and their families didn’t know much about politics or could barely name a political leader in their city, state or country. But after learning more and more about how they can take control by using their voices and engaging in their communities, students in my Generation Citizen action civics class began to become confident and empowered.

Today’s students are the future, but they’re also actors of change for today. So as you read this, I ask you to think about the change that civics education can provide for your community, your future and — most importantly — your life today.

I am A’Niya Bankston. I am 15 years old, and I fight for civics education and for everyone’s voices to be heard so that we can create a changed democracy and world.

This story on civics education in high school was produced by The Hechinger Report, a nonprofit, independent news organization focused on inequality and innovation in education. Sign up for our newsletter.

A’Niya Bankston is a student at Oakland Technical High School in Oakland, California, and the 2018-19 chair of the student leadership board of Generation Citizen. 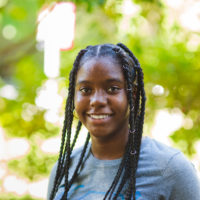 A’Niya Bankston is a student at Oakland Technical High School in Oakland, California and a member of Generation Citizen’s student leadership board. See Archive