This story also appeared in The Bell

After getting expelled from two middle schools and “doing literally nothing all day” at a Brooklyn high school for aspiring artists, Stephanie Gaweda decided she wanted to turn her life around. But her guidance counselor told her that there was no way she would be able to graduate by age 21.

Gaweda’s math teacher had another idea: He suggested that she go to a school specifically designed for students not on track for graduation. These schools, which serve 13,000 students across New York City, are known as transfer schools.

I met Gaweda while reporting on transfer high schools for the Miseducation podcast. To find out how transfer schools came about — and their effects on students — I sat down with Paulette LoManaco and Rachel Forsyth of Good Shepherd Services, a citywide nonprofit that supports marginalized youth.

Good Shepherd was working in Red Hook in the 1990s, during a time when Life magazine called it the “crack capital of America.”

In an effort to reengage recent dropouts, Good Shepherd founded South Brooklyn Community High School. South Brooklyn emphasized social-emotional learning, a high counselor-to-student ratio and paid internships. “The early days were tough,” said LoManaco. “We would be broken into. Computers would disappear over a long weekend.” But by the time Mayor Michael Bloomberg came into office in 2002, South Brooklyn was showing signs of promise.

Bloomberg, in an attempt to raise New York City’s dismal graduation rate, which hovered around 50 percent, teamed up with Good Shepherd and the Bill & Melinda Gates Foundation to spread the model around New York City. (Note: the Gates Foundation is one of the many funders of The Hechinger Report).

Today, there are more than 50 transfer schools across New York City’s five boroughs. Every year they give students who otherwise wouldn’t graduate — students like Gaweda — a second chance.

To hear Gaweda’s story, listen to the Miseducation podcast, and tune in for the rest of Season 3 as my fellow interns take you inside the Big Apple’s transfer schools.

This story about New York City’s transfer high schools was produced by The Hechinger Report, a nonprofit, independent news organization focused on inequality and innovation in education. Sign up for Hechinger’s newsletter.

Zoe Markman is a student in the High School of American Studies at Lehman College and an intern for the Miseducation podcast at The Bell. 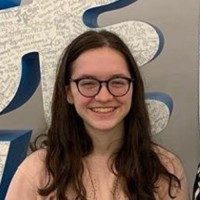 Zoe Markman is a student in the High School of American Studies at Lehman College and an intern for the Miseducation podcast at The Bell. See Archive