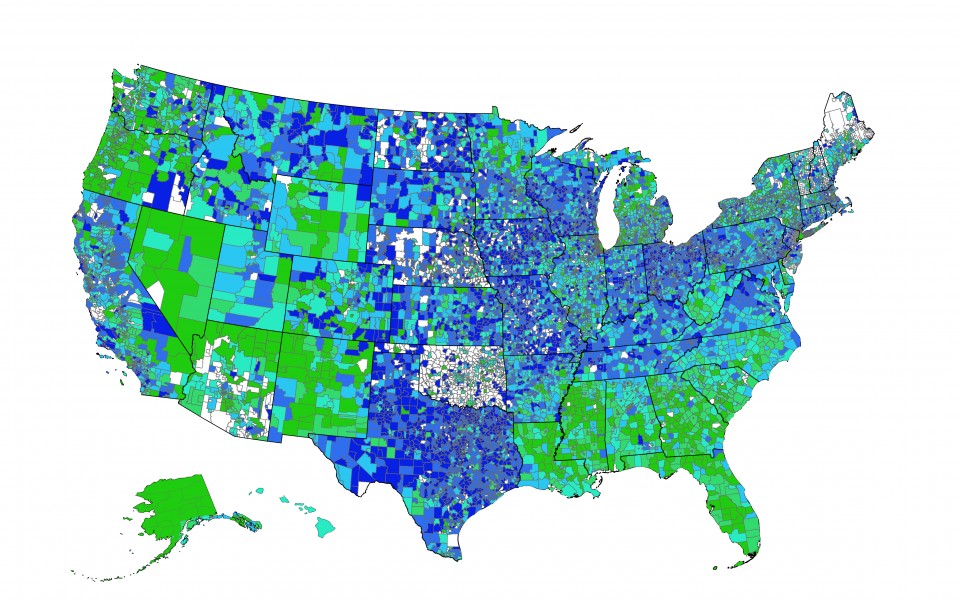 The graduation rates from every school district* in one map

A one-of-a-kind analysis of how each district fares

Until now, if you wanted to know how a school district’s high school graduation rate fared against other states or regions, you’d have to rely on state averages from the federal government.

We decided that’s not good enough.

Since we’re becoming a little obsessed with high school reform over here, I gathered the district-level statistics nationwide and compiled them for anyone else as curious as we are.

The government mandated a uniform way of calculating high school graduation rates beginning with the class of 2011. Since then, the national rate rose from 79 percent to 81 percent in 2013. It ranges from 69 percent in Oregon to nearly 90 percent in Iowa. But with only state-level figures published, that’s an incomplete picture, since low-performers are masked into averages.

Related: Even vocational high schools are pushing kids to go to college

Hence this map. It comes with caveats, too. These rates are for all students from 2013, as a handful of states have yet to report their 2014 numbers. The state information wasn’t always completely in line with the district maps, and obviously, I’m missing some districts. The data don’t capture charter schools or private schools. Different states have different graduation requirements. And as NPR did an excellent job explaining earlier this month, reported graduation rates can be questionable.

All summer long, I’ll be exploring the trends in different regions and states and zooming in on some of the harder-to-see areas. Keep checking back, and leave comments or tweet us anything you see that I should look into: @sarahbutro or @hechingerreport.

* Graduation rates were not available for some districts, but we included all the ones we could find.

Update: Originally we were missing data from Pennsylvania, which had said only reports graduation rates by individual school, and Oklahoma, which was waiting to get approval from its Board of Education to release the information for all its districts. We’ve gotten as much as we could from both states now, though, and have added it in.

Want to look at the data yourself? Download it here.

If you want more detailed information from any state**, you can find their high school graduation rate files here:

**I was emailed the information from Oklahoma, Pennsylvania, Indiana and Vermont.

Correction: This map has been updated with the corrected graduation rate for several school districts in California.