I miss watching Gunsmoke on Saturday nights. I miss casseroles. I miss canasta games with friends. I miss browsing the new video releases at Blockbuster. I miss being completely off the grid.

But missing it and wishing it could be so again is the stuff of memoirs. Time only moves in one direction. And so it is with manufacturing production jobs. President-elect Donald Trump promises to deliver those jobs back to the many who have idled by shifts in the economy.

Those blue-collar jobs – at least as we remember them in our collective imagination – went to people, mostly men, fresh out of high school, graduate and dropout alike. In 1967, fully three-quarters of the American workforce had a high school education or less. It was all the education they needed to earn a middle-class living.

Related: If the anger that propelled Trump’s win is economic, can higher education fix it?

The strong downturn in production industries in this country can be traced to 1983. Ever since then, the percentage of jobs in these industries and the average pay have steadily dwindled. What happened? The popular notion is that the jobs were shipped to low-wage countries like Mexico or China. The reality is that in recent years, 88 percent of job loss in manufacturing is due to gains in productivity, such as increased use of robots.

The Great Recession of 2007-09 economy devastated America’s least-educated workers. During the recession, 5.6 million workers with a high school education or less lost their jobs, and collectively they have gained only 80,000 net jobs since the recovery began in 2010. Fifty-two percent of all unemployed workers in this country have a high school education or less. Of those low-educated workers who do have jobs, 45 percent make $9 an hour or less.

But that doesn’t mean all is lost, and there is no hope. America has shifted from a manufacturing economy to a service economy. This country created 82 million jobs from 1967 to 2011, and all of them were in service industries. These are not all low-skill occupations like store clerks, hotel maids, baristas, and other such “McJobs.”

Related: Educators ponder meaning of a Trump presidency: Plea for “the vulnerable and the bullied”

The key growth in U.S. employment has come in offices and non-office settings like hospitals and schools. These include jobs in healthcare, information technology, financial services, office-based clerical and administrative work, and skilled workers in construction, repair, and machinery operations.

We talk frequently in this country about income inequality. But what we really have is an education deficit.

Changes in consumption patterns have led to the expansion of business sectors with more educated workers. Increased productivity has left consumers, by and large, with more money to spend, and demanding more sophisticated and customized products. This, in turn, has led to more layers in the production recipes for consumer goods, and more companies (like marketers and distributors) taking a piece of the revenue. Our increasing comfort and demands have led to a desire for more high-end products, and growth in the information, finance and business sectors.

All of these factors have contributed to the growth of “middle-skill jobs.” They account for 36 percent of all jobs. By contrast, the low-skill service sector of retail and food and personal services (the quintessential McJobs sector) accounts for 19 percent of all jobs. Manufacturing production jobs are even more rare: just 9 percent of the workforce.

We talk frequently in this country about income inequality. But what we really have is an education deficit. Not everyone can get a Bachelor’s degree, and not everyone should, but workers also must realize that high school is simply not enough anymore. These “middle-skill jobs,” on average, pay close to the median earnings of all full-time, full-year workers ($42,000), if not more. They are good jobs that pay without a B.A. Most require, however, some postsecondary credentials, whether it be an Associate’s degree, a certificate, a license, or a certification.

Americans are responding to this new reality – 25 percent of workers had some college in 1967; now 61 percent of workers have some credentials beyond high school. We expect that about 20 percent of high school graduates, almost all men, can achieve a middle-class income through jobs that mostly involve skilled manual labor. But that still leaves nearly one-fifth of workers with not enough education or skills to thrive in the modern economy.

Reflexively, we tend to favor manufacturing jobs over service-sector jobs, but that doesn’t make sense. Rather than giving false hope, the United States should be investing in training and education that meets these workers where they live. This is a challenge, but it has the virtue of being connected to the actual, existing economy, rather than the economy’s idealized past.

Dr. Carnevale is Director and Research Professor of the Georgetown University Center on Education and the Workforce, an independent, nonprofit research and policy institute affiliated with the Georgetown McCourt School of Public Policy that studies the link between education, career qualifications, and workforce demands. 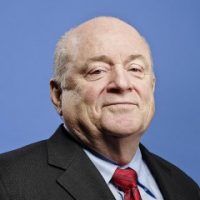 Dr. Carnevale is Director and Research Professor of the Georgetown University Center on Education and the Workforce, an independent, nonprofit research and policy institute affiliated… See Archive