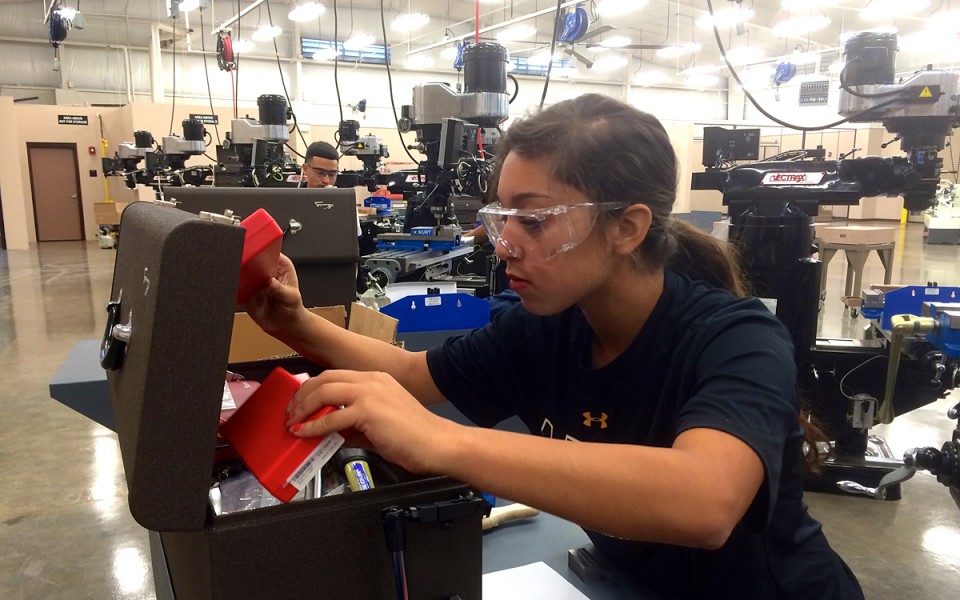 What if a high school diploma guaranteed a highly paid job?

WACO, Texas — At first glance, there’s nothing revolutionary about the Greater Waco Advanced Manufacturing Academy, a vocational school opened in 2013 to serve students in and around this central Texas city. The machines are fancy and gleaming, but the students here learn skills for the sorts of jobs that fueled America’s economy last century: welding, manufacturing, building homes.

Around Waco, though, those jobs are still heavily in demand. And the academy offers a unique promise that’s unheard of even among a new generation of career and technical schools striving to make education more relevant and useful for today’s teenagers: a guarantee of a job after graduation.

Welders can make $60,000 in Waco, so a new vocational school is going against the grain to train students for this 20th-century, blue-collar career.

“If kids finish, they will be hired,” said Robin McDurham, executive director of secondary education for the Waco Independent School District. “If we had a kid who was looking for a job and hadn’t been placed, we would call the businesses and say, ‘We have one that hasn’t been picked up.’”

At the end of last school year, the school hosted a “signing day” in which five students signed contracts with partner businesses. By the fall, 27 students out of the graduating class of 35 had gone to college or found jobs, or both. Eleven of them went to work with companies partnered with the school. (The school had eight graduating seniors who did not apply for either after receiving their diplomas and did not report their post-graduation plans.)

As a movement to reform high school gains momentum around the country, vocational education is being revived. New models are seeking to change the reputation of career and technical classes as dumping grounds for the students who can’t make it in the academic track.

These new programs emphasize both careers and college, and though they tend to promise an internship or interview with partner companies that can lead to opportunities, they don’t go so far as to guarantee a job.

The National Academy Foundation is a network of more than 600 schools that house “work-based learning” programs. It’s grown to serve 80,000 students, up from 50,000 in 2010. Students complete internships and participate in classes shaped by business partners while also taking college-track courses, and the foundation says more than half of its graduates earn a bachelor’s within four years of high school graduation. (In 2013, just over a third of 25- to 29-year-olds had completed a bachelor’s degree, according to the National Center for Education Statistics.)

Greater Waco Advanced Manufacturing Academy is more old-fashioned. School administrators are proud of the students who go on to college, as many in the school’s first graduating class did. But they’re also pleased when students get a job straight out of high school using the skills they learned there.

“Let the business pay for college.”

In Waco, where the median-income is $40,000 according to the latest U.S. census numbers, that’s a big deal. The academy is drawing a diverse group of students from 11 different school districts, from urban Waco to rural areas up to 45 minutes away. Sixty percent of students are Hispanic, 23 percent are white and 17 percent are African-American.

Alex Acuña, 17, lives in the tiny town of McGregor, south of Waco. Both of his parents came from Mexico, “and they didn’t really have anything,” he says. His father works at a Purina factory making animal food, and his mother babysits. Alex sees a welding diploma from the academy as a chance to help his family reach the middle class.

“I’m going to get her everything she wants,” he said of his mom.

Yet despite this more traditional focus on blue-collar job skills, the school is also incorporating some key strategies of the college-ready movement as it tries to make learning more connected to the real world. It lost a dozen students out of the original 67 juniors and seniors who enrolled in the fall of 2013 because some decided the vocational focus and the rigor of the curriculum wasn’t for them, according to Jonathan Price, the school’s family-community liaison.

Much of the curriculum is organized around projects, for instance, a popular trend in many new college-focused high school programs. But at Greater Waco, geometry students spend the year using the formulas they’re learning to create blueprints for a house — and then build it.

“I wanted something different than being in a classroom and just doing book work,” said Lee Anna Reyes, 16, as she looked up from a vice stop she was making on a precision metal machine. “This is a bit more hands on, and I learn better that way.”

College isn’t necessarily an afterthought for Greater Waco administrators, however. Rather, they encourage students to be savvy about planning for post-secondary education, teaching them about the tuition reimbursement programs some of the school’s partner companies offer employees, for example. “Let the business pay for college,” Price said.

“It opens up their future,” he added. “For the kids here in Waco, they need that so badly.”