This story also appeared in TES

This story was produced by TES and reprinted with permission.

On August 25, 2015, I survived a teacher’s worst nightmare: a 14-year-old student in my classroom with a loaded gun.

It was seven days into the school year, and so far things were going well at Philip Barbour High School, a small high school of around 700 students located in rural north central West Virginia.

Though I have been teaching for 30 years, this was only my fourth year teaching freshman World Studies. I had only recently returned to regular education after decades of teaching students with behavior and emotional issues.

The bell rang to begin class, and my classroom door was open as encouraged, but before I could start my lesson, a student who had been absent from my morning class rushed in, and stood in the middle of the room.

I smiled and asked him cordially what he needed, thinking he was there to pick up missed work or explain his morning absence.

Instead, he walked directly to me, raised a gun, and pointed it at my head.

For a split second I thought that perhaps this was a failed attempt at a bad joke. That thought quickly fled as the armed student started barking orders.

“He began to single out students, telling them to stand.”

His commands were cold and terrifying.

Shut the door! Cover the windows! Lock the door! Throw the keys across the room!

I followed his orders, the whole time talking to him as gently and as calmly as I could. I thought back to all my training in how to deescalate a student with an emotional or behavioral disorder. I asked him what was wrong. I tried to keep my voice steady, but constant, all the while I was locking us in with a young man who said he was going to kill us.

He initially ignored my questions. Instead, he told the students to take out their cell phones, put them on the floor and put their hands in the air.

They did. Some of them began to cry.

He didn’t like that. He told me, “make them stop.”  So I did. I told them as confidently as I could that it would be ok, even though I wasn’t sure that it was going to be. And they listened. They tried to stop crying, muffling their sobs and holding each other.

Related: Bullied by the badge

A girl the armed student had been romantically involved with approached him and asked him for the gun. He instead gave her his wallet and cell phone, saying he didn’t need his personal things anymore. The girl collapsed into a chair, sobbing. Despite fearing for their own lives, other students gathered around her, comforting her, trying to help her stop crying. I have never witnessed bravery like I did that day in my students.

“I continued to try to earn his trust, constantly telling him things had not yet gone too far.”

I opened a desk drawer close by and asked him to put the weapon in the drawer, that he hadn’t yet gone too far.

He shook his head, pointed the gun at me, and said, “No.  People are going to die today.”

He began to single out students, telling them to stand. He would ask them questions and told them if they answered wrong, they would die.

Related: When fourth-grade problems include gunfire

I knew that no matter what happened, I had to do everything I could from letting my students get hurt.

When he would put the gun on a student, I would start talking, making noise, or moving, redirecting his attention to me. Sometimes I was moving and didn’t realize it. Any time his attention trained on the students, I did what I could to divert it. At this point I thought, “this is my day to die.”

Sometime after 1:00 PM, I realized that the bell would be ringing for the next class. We had been hostages in my room for close to 25 minutes, and no one in the school knew.

All around me teachers were teaching and students were still learning. But in about 20 minutes, the bell would ring, and more lives would be put into danger.

I announced to the whole room, “the bell is going to ring soon, don’t anyone move.”

I looked at the armed student and said ”If someone moves don’t do anything. We’re conditioned to move on the bell. More students are going to want to come in here. What are we going to do? What’s the plan?”

He answered, “The plan is they can come in here, and some of them will die too.”

I paused then, and from a higher place came the courage to say, “We need another plan.”

I didn’t think I was going to make it out of that room, but I was determined that no other students were going to come in and meet the same fate.

After some careful negotiations, he agreed to let me retrieve my keys, open the door as students knocked, and tell them to go across the hallway to another class. When the bell rang and students began arriving for class, the hostage students stood out of sight, while I turned each new student away through a crack in the door. The whole time the armed student stood just out of sight with the gun pointed at me. I greeted each student abruptly, hoping that my strange behavior would not go unnoticed.

Soon, the teacher across the hall, realized my class was still in my room and that I was turning students away at the door. She knocked, I opened the door, and she leaned her head in and scanned the room. The student placed the gun to her head and ordered her to come in. Acting quickly, she pulled back, slammed the door shut, and was gone.

Related: ‘The first time I got shot, I was in fifth grade’

The armed student became more agitated than ever, saying now there would be a lockdown. I was truthful. I told him yes, there would be. He was panicking, and said the police would come and shoot through the window. I told him to stay away from the window that we would go out together.  I continued to try to earn his trust, constantly telling him things had not yet gone too far.

“The armed student became more agitated than ever, saying now there would be a lockdown.  I was truthful. I told him yes, there would be.”

Then came the announcement through the loud speaker: We are in lockdown. We heard voices outside the door. The local chief of police arrived, and negotiations began between the student and the police.

Finally, the student agreed to let the students and I leave. He stood behind my desk, put the gun to his own head, and warned that if police intervened, he would kill himself.

I stood by the door while my students filed out quietly, some of them still doing their best not to cry. I heard the policeman yell, “Teacher! Run!”

But I didn’t want to leave him, hurting, angry and scared, with a gun now pushed to his own head.

Before I left, I turned to him and I said to him, “It’s going to be ok.” I don’t remember if he answered me or not, my desire to live now pushing me out the door and away from my classroom.

After another hour of negotiations, the young man’s pastor was finally was able to walk him out of the room.

There were no tragedies that day.

I returned to school the next day not knowing how many of the students would return. Almost half  returned.  We had 100 percent staff attendance that day, but we were forever changed.  The remainder of the year was difficult. We often felt unsafe, and it’s hard being afraid to go somewhere you have always loved going.

We soon realized that in order to heal, we had to work together. With the help of our student council and the website www.pledge.org, we organized safety assemblies where students could take a pledge that begins, “I will not bring a gun to school.”

These assemblies were effective, but there is still much work to be done.

As terrifying as the events of August 25th were, the lack of preparedness for this event is the thing that continues to unsettle me. My age, experience, and background in special education helped me keep us safe that day, but not every teacher has had training in emotional and behavioral disorders and how to deescalate these students.

Teachers and schools need more specialized training in these areas as our country faces more of these situations. School based mental health is necessary.

August 25, 2015 ended peacefully. I know we cannot change every student or make each one feel safe, but every school needs “another plan.”

One that will make our schools a place of peace.

Twila Smith is a teacher at Philip Barbour High School in West Virginia. 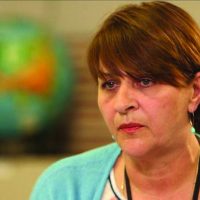