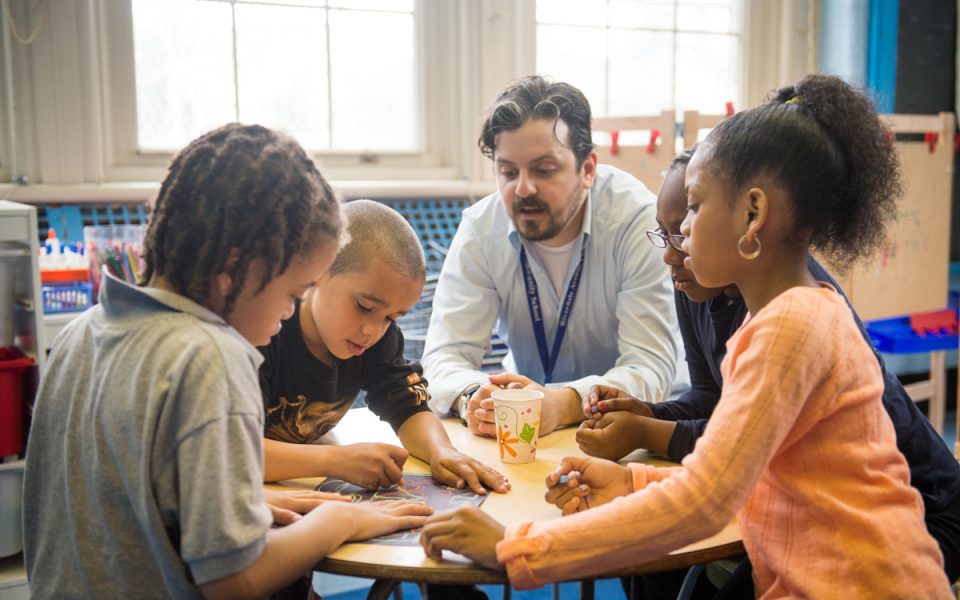 At a school in Brooklyn’s poorest neighborhood, literacy is up and disciplinary problems are down

This story also appeared in WNYC

BROOKLYN, N.Y. — Three years ago, when Public School 446 opened in a building where two others had failed, it inherited many of the youngest students. Among them was a second-grader who was supposed to be in fourth grade and was reading at a kindergarten level.

The boy was one of a handful of students who had regular violent outbursts — he threw chairs and hit other kids.

“He was coming to school with a lot of stress, and he wasn’t being successful academically, so he was acting out,” said Meghan Dunn, the principal of P.S. 446 in Brownsville. “Kids would rather be known as the bad kid than the dumb kid.”

Dunn was well aware of the building’s troubled history when she agreed to open the new school in 2012, after two previous elementary schools in eight years were closed for poor performance. Dunn knew she’d be working in a community that desperately needs stability: Brownsville has the second-highest rate of student homelessness in Brooklyn and the highest elementary school student absenteeism in the city — 40 percent of its children miss 20 or more days of school per year.

The neighborhood is the poorest in Brooklyn and also has one of the highest rates of psychiatric hospitalizations and incarcerated residents in the city. Two years ago a man was shot in broad daylight in front of the school while classes were going on. Once the murder capital of Brooklyn, residents say they have seen improvements in the neighborhood. Still, the Brownsville police precinct had the third highest number of major felonies in Brooklyn last year and is sandwiched between the first and second highest.

Related: Is the biggest learning disability an emotional one?

So Dunn decided to try something different when she opened the school three years ago. She assumed many students would arrive with lots of physical and emotional needs, and structured the school to handle their issues in ways that regular public schools can’t. It took extra money from a foundation and a small army of social workers, and the results are promising. The percentage of students reading at grade level climbed to 41 percent last spring, up from 32 percent the previous year, according to a widely used literacy benchmark. The number of disciplinary incidents during the same time period dropped by more than a third.

In Brownsville, Brooklyn, 40 percent of elementary school children miss 20 or more days of school a year.

At a time when schools are under increasing pressure to teach tougher standards (known as the Common Core) and begin the path to college readiness in kindergarten, this school, and several others around the city, are taking care of kids’ emotional and physical needs as a route to improving their ability to learn.

“When some of the trauma that happens out of living in a shelter or being in poverty causes problems, people say, ‘Oh, I can’t believe this happened,’” said Dunn. “Actually, these are very predictable problems, because we have a lot of information about what happens when you are constantly under stress, as a kid or as a parent.”

The struggling second-grader was immediately matched with a social worker who began seeing him individually and also met with his parents to help connect them to an outside evaluation of the boy’s possible learning issues. (Problems like ADHD and dyslexia must be diagnosed by a doctor.) To help shift his behavior, the social worker told him to write down every time he walked away from a conflict. After he avoided a fight five times, he got 15 extra minutes of basketball.

Dunn also assigned him 30 minutes a day of one-on-one literacy help, which allowed him to improve his reading.

Still, the boy was getting in fights every day at recess, so the school created an “alternative recess” for him and made him the “assistant gym teacher” for kindergartners. This year, as a fifth-grader, he is one of the school’s “junior coaches” who helps run recess and resolve conflicts between students.

Amir Brann, the school’s social work director, emphasizes that the work his staff does with parents is as important as the work with kids, since it is difficult to have an impact on children if their families are in constant crisis. Dunn estimates that about one in eight of her students are homeless.

P.S. 446 gets its extra staff and support from Partnership With Children, a citywide nonprofit that sends social workers into schools. The extra services at P.S. 446 cost about $200,000 per year, according to the Partnership, and are paid for through a combination of private funding and the school’s budget — Dunn forgoes an assistant principal to make it work.

The team of three full-time social workers, plus three social worker interns, meets with about 100 of the 370 students each week, about a third in individual sessions and the rest in groups. Older kids can choose a group, like “art” or “school newspaper,” and meet after school. They also get dinner and homework help. Younger children meet during lunch in playgroups. Also, once a month, the social workers run a morning parents group and an evening fathers group, where dads can talk about their struggles.

In addition, the social workers accompany parents to medical appointments and housing court and do home visits. And this year they have added office hours just for teachers.

“Kids would rather be known as the bad kid than the dumb kid.”

Partnership social workers are in 32 schools around New York City, including in some of Mayor de Blasio’s recently designated “community schools,” which receive extra funding from the city to allow them to function as social service centers in low-income communities.

The group says not only has safety and attendance improved in the schools where it works, but the number of elementary schools students performing at grade level has increased by 17 percent on state English exams and by 14 percent on state math tests. The group has always measured students’ social skills and emotional health, and when the city began to introduce the more-demanding Common Core standards a few years ago, Partnership staff embarked on an effort to connect the skills they considered important to those required by the Common Core. It took about a year, and the group had city education department officials review their curriculum to make sure their work was accurately linked.

Related: Violent beginnings: How to help preschoolers who witness violence and trauma

“We don’t want to be fighting the Common Core,” said Margaret Crotty, executive director at Partnership With Children, who said she supports the standards in spite of the brewing statewide controversy over revamping them.

Crotty believes that the critical thinking skills required by the Common Core is in keeping with her social workers’ efforts to have students think carefully about the decisions they make about their own lives, inside and outside school.

“If kids can’t sit still and pay attention through a class, how can they even begin to sit through a test?” she asked.

Sometimes the fix is simple. One P.S. 446 student was chronically late to school and a social worker discovered that the shelter where the family was staying didn’t have alarm clocks. The mom’s phone, which they had used as an alarm, had broken. The school purchased an alarm clock, and the tardiness ended.

“When some of the trauma that happens out of living in a shelter or being in poverty causes problems, people say, ‘Oh I can’t believe this happened.’ Actually these are very predictable problems.”

“We work a lot with kids to be able to ask for what they need,” said Dunn. “So kids know if you need anything, you just have to ask for an adult … if you don’t have a winter coat, we’ll find you one. When kids are acting out, a lot of time it’s because they don’t know how to communicate what they need.”

Parents say they appreciate the extra support. Latoya Watson’s third-grade daughter, Kalian, began in the building as a pre-k student at the previous school that was closed. She switched in to P.S. 446 in kindergarten and Watson has seen a big difference.

“It’s been a positive influence in my life,” said Watson, 33, who is the PTA vice president. “[The social workers] deal with not just the school or the kids – they try to help you as a person. They have a lot of ways to help yourself and to help your child.”

Watson went to Amir Brann when her older son, then in middle school, was badly beaten up in the neighborhood. Although he clearly had kidney damage, he wasn’t getting properly treated at the local clinics, so Brann connected her with a specialist, who helped.

Meanwhile, her daughter Kalian, 7, often wouldn’t speak in school when she was younger. She joined the school’s art group and then the environmental group that meets after school, and Watson says she has “come out of her shell.” The social workers also helped out when Kalian was being bullied in first grade.

“Now she feels comfortable at school – she knows there’s someone to talk to without feeling like she will get in trouble,” said Watson, who also attends the monthly parent meetings. “That means a lot to me. I don’t have to worry about her in school.”

Like most schools, P.S. 446 uses literacy assessments to keep track of reading levels, which became even more important after about 70 percent of the parents opted not to have their children take the state standardized tests last spring. The school’s third grade pass rate on the state reading exam was more than twice the district’s average, and they performed better on the math exam as well, but comparisons are shaky, due to the small number who took the exam.  Still, the school follows the same standards as other schools in the state.

“All of our curriculum is Common Core-aligned,” Dunn noted in an email.

She says the assistance of the social workers is indispensable and allows for teaching instead of constant crisis management.

“They’re able to do things that we just can’t do,” said Dunn. “There’s only so much schools alone can do.”

Meredith Kolodner is a staff writer. She previously covered schools for the New York Daily News and was an editor at InsideSchools.org and for The… See Archive