Like many parents, Dahlia Lithwick felt absolutely dumbfounded after sitting through one too many back-to-school meetings at her children’s school. The Ivy League-educated lawyer and journalist expressed her frustration in a revealing piece for Slate last week—one that highlighted the communication breakdown that hampers education reform.

The jargon-filled language has made its way into back-to-school nights, and it’s no wonder parents are confounded. 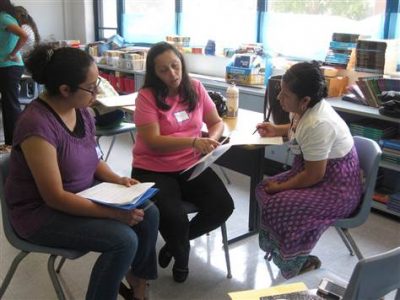 “Somewhere along the line, public education became so completely overmastered by its own jargon, broad templates, and unspecified testable outcomes,” Lithwick wrote.

She described sitting in one of those endless school meetings, the kind to which many of us rush breathlessly from work and other obligations because it seems important, and then—as our heads begin to spin—wonder why.

“I felt as if I were toggling between a business school seminar and the space program; acronyms alone—seemingly random sequences of letters like MAP and SOL and EAPE—were being deployed more frequently than actual words.”

The tendency toward acronym-laden programs has been true since long before the federal government came up with an astonishing list of them, including ESEA (Elementary and Secondary Education Act), NCLB (No Child Left Behind), and President Barack Obama’s Race to the Top competition, also known as R2T, RTT or even RTTT.

At The Hechinger Report, where many of us have covered education for decades, we are still easily lost in the acronym jungle. Yet, it’s part of our mission to help explore, explain and analyze trends with terribly unwieldy names, like the Common Core State Standards (new, mostly nationwide education standards in math and English) or MOOCs (massive open online courses) and STEM (science, technology, engineering and math).

“ ‘Hybrid’ sounds like a car and ‘blended’ sounds like a smoothie,” Scott Benson, a program officer for the Bill & Melinda Gates Foundation, recalled a colleague saying at a conference. Yet both terms are used constantly, along with “personalized” or “custom” learning that allows students to move at their own pace.

Benson writes an excellent and clear blog that represents his own views, not those of the Gates Foundation (which is among the supporters of The Hechinger Report).

Still, it has an unwieldy promise the average parent couldn’t possibly untangle: “Dedicated to the vision that we can scale personalized, mastery-based learning to every K-12 student.”

What Benson and the many others who are pushing hard to change U.S. public education want is admirable and difficult—and, apparently, especially hard to articulate.

Valerie Strauss of The Washington Post’s “Answer Sheet” blog recently lamented the confusing and over-used phrases so common to the current education reform movement, such as “disrupt the status quo,” “the accountability movement,” “school choice” and “21st century skills.”

As a journalist, I dutifully report on all of these efforts, but I can’t help mourning the hideous jargon that’s crept into the education lexicon.

It’s absolutely critical for parents to understand not just what’s going on in their children’s schools, but also how it fits into the larger picture of U.S. public education, which we often hear is lagging behind the education systems of other countries.

She described sitting in one of those endless school meetings, the kind to which many of us rush breathlessly from work and other obligations because it seems important, and then—as our heads begin to spin—wonder why.

(Several other acronyms are often bandied about to describe this trend, including our performance on TIMSS [Trends in International Mathematics and Science Study] and our NAEP [National Assessment of Educational Progress] scores.)

In the meantime, I’m offering some potential solutions, so we don’t all just wring our hands in despair. One is the excellent, alphabetized list of definitions, courtesy of School Wise Press, that offers concise explanations for terms you really shouldn’t use in conversation.

The site bemoans the use of “edspeak”—which, in the words of sociologist Martin Kozloff, is akin to “unmatched twaddle. Unbelievable bilge. Absolutely staggering nonsense.”

I wish I had better advice for Lithwick about handling back-to-school night, parent forums, conferences and PTA meetings. Even though I’m an active New York City public-school parent, I’ve spent years trying to avoid such events while contributing in other ways.

When my kids were in elementary school, I skipped meetings but volunteered instead to write the school newsletter; I got to ask actual questions and get real answers on my own time.

I still struggle, especially when written communication from my son’s high school floors me with instructions such as, “During OP on the first day of school, all students will receive the Fall Programming Letter, outlining the process to initiate a program change.”

I’m afraid to ask about the process because I’m sure I won’t understand the answer.

I still show up for parent-teacher conferences, where there’s never time for jargon. New York City public-school teachers are contractually responsible for giving each parent just three minutes of their time.

It’s up to all of us who think, care and write about or work in education to do a better job of sidestepping jargon. I’m partial to the list of banned phrases compiled by Carlos Lozada, the Washington Post Outlook editor, because it includes many of the clichés that some educators and ed-reformers seem to love so much—particularly “no silver bullet,” a phrase you’ve heard as often as the unambiguous but overdone-and-now-meaningless, “I believe all children can learn.”

I also wish that self-declared education reformers like former Washington D.C. Schools Chancellor Michelle Rhee would step away from jargon and help the rest of us understand what she’s actually talking about. In a recent op-ed published in the Philadelphia Inquirer about that city’s cash-strapped school system, Rhee’s strong view got bogged down.

“I see a clear opportunity in Philadelphia to use this moment to implement education reforms that will increase transparency in school funding, ensure that available dollars are going toward the programs that have the most impact on student learning, and protect effective teachers and keep them in the classroom,” she wrote.

Nothing clear about it. I think she wants to spend more money on better teachers?