The Common Core’s main selling point was that new, shared standards would ensure American students were learning at the same rates across state lines. Common standards – linked to common tests – would tell schools in Illinois how they stacked up against schools in Massachusetts or California.

Now, as more states back out of the tests, the “common” in Common Core is threatened. 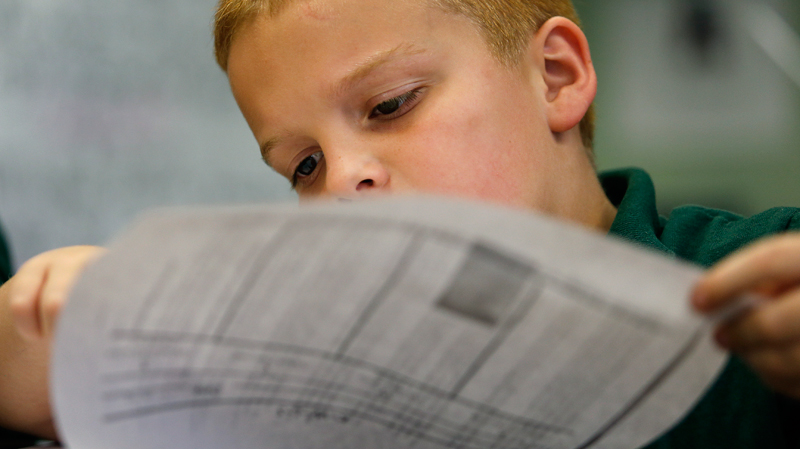 In 2010, 45 states adopted the Common Core State Standards, a set of skills in math and English students should master in each grade. By 2012, they had all signed up for at least one of two federally funded, multi-state consortia charged with developing new online tests that would match the standards and be shared among the states. Today, that number is down to 36, as states have pulled out to design their own exams or dropped out of the Common Core altogether.

Fewer than half of states that signed up to share exams will administer those tests next year. Seventeen states are planning to use their own tests or other versions, including one created by ACT, the college testing giant. And other states are wavering about whether to adopt the shared tests, including New York and Michigan.

An Education Week analysis found that now just 42 percent of K-12 students will take the tests designed by the Smarter Balanced Assessment Consortium or the Partnership for Assessment of Readiness for College and Career (PARCC) if loyalties stick in 2015 and beyond.

A deadline is looming. States must administer a test matched to high standards – for most states, that means the Common Core – by next spring or risk losing federal funding (Race to the Top) or violating No Child Left Behind waivers.

“Are leaders going to feel comfortable sticking with the assessments when the scores drop so dramatically?” -Kathleen Porter-Magee, Fordham Institute

At stake is the ultimate goal of Common Core – consistent expectations for students across American classrooms. Multiple exams may jeopardize that goal, says Kathleen Porter-Magee, an education policy fellow at the Fordham Institute, a conservative education think tank. But she says states are still moving in the right direction.

“We had 51 standards and 51 tests. Now that we’ve moved to Common Core we’re talking about five or six testing options,” she said. “We’ve moved to more comparability.”

She said it’s good to develop multiple test options in order to see what is and isn’t working. But too many choices might be counterproductive.

“As we see more states peel off, if we go back to one set of standards and 50 tests, we would really complicate matters,” Porter-Magee said.

The most recent withdrawal from the tests came on June 5 when Oklahoma Gov. Mary Fallin signed legislation that repealed the Common Core State Standards there (Oklahoma left PARCC last summer). Arizona backed out in late May, when Gov. Jan Brewer cancelled her state’s membership in PARCC. South Carolina passed legislation on May 30 that keeps the standards in place for the 2014-2015 school year only. Indiana dropped the standards in March.

In Missouri, Gov. Jay Nixon is considering a bill that would commission groups of “education professionals,” mostly working teachers, to develop and make recommendations for new standards. And in North Carolina, a Common Core state, legislators passed bills requiring an appointed panel to make recommendations for possible revisions of the standards to the state board of education. A group of retired military generals isurging lawmakers in North Carolina not to repeal the Common Core, which could make frequent school changes across state lines simpler for military children.

This story is part of our ongoing coverage of the Common Core. Here are just a few of our stories:

PARCC has been the hardest hit of the two consortia, with just nine states and Washington, D.C. still listed as members, down from 24 in 2010. Other states haven’t dropped out of the consortia, but are waffling on how to test the Common Core. In March, Tennessee legislators voted to stall the state’s adoption of PARCC tests. Students there will continue to take the multiple-choice Tennessee Comprehensive Assessment Program, or TCAP, next spring.

The uncertainty has been hard on teachers. Cecily Woodard, an eighth grade math teacher at Rose Park Magnet School in Nashville started training to be a Common Core coach in Tennessee last spring at the University of Pittsburgh’s Institute for Learning. There, she and other coaches elected by the state learned how to teach the new standards and were sent back to Tennessee to help train another 30,000 teachers across the state to prepare students to take the new test next year.

“We were under the impression that this year would be our first year to have the PARCC test. Just before our training this summer we found out we weren’t,” Woodard said.

Gera Summerford, president of the Tennessee Education Association, the state teachers union, said the state is making changes to the TCAP in the wake of the moratorium, but that it is not fully aligned to the Common Core. Teachers there will still be required to teach to the standards in their classrooms, though.

“I don’t like being in this place,” Woodard added. “If we are going to have a test at the end of the year that is something that people are judging teachers by, it really should be aligned.”

Massachusetts is giving school districts until June 30 to choose between the PARCC test and the old state standardized exam for the 2014-2015 school year. The state as a whole will decide whether to commit to PARCC or use a state-developed test at the end of next school year. And in New York, which previously signed up for PARCC tests but has used its own Common Core-aligned tests in the mean time, a drastic drop in test scores last year prompted legislators to delay a commitment to the test. It’s unclear which test students there will take next year.

The situation in the Empire State could foreshadow possible problems nationwide, Porter-Magee said.

“We expect scores to drop like they have in places like New York. Now the stakes are much higher,” she said. “Are leaders going to feel comfortable sticking with the assessments when the scores drop so dramatically?”

Derek Briggs, an education professor at the University of Colorado, said there was never going to be absolute commonality for Common Core with some states using Smarter Balanced, some using PARCC and still others designing their own. The number of last-minute withdrawals “exacerbates the situation,” but could be a hidden advantage, said Briggs, who is on the technical advisory committee for both testing groups.

“It may well be that having a number of states drop out might be a blessing in disguise,” said Briggs. “It might mean that there are a smaller number [of states] that are more like minded and easier to come to terms.”

He cites the success of the New England Common Assessment Program, or NECAP, a small testing alliance that began with New Hampshire, Vermont and Rhode Island. The three states collaborated to create “grade level expectations,” and Measured Progress, a New Hampshire-based test design company, created common exams in reading, writing and math. The first tests were given in 2005. Maine joined the collaborative in 2009.

“They’ve been very successful because (NECAP) states generally have the same vision for what they want to accomplish,” said Briggs.

Still, Briggs wonders whether tests developed by states on their own will be as good as what states have developed together in the consortia. PARCC and Smarter Balanced tests place a heavy emphasis on technology and performance-based tasks and add enhancements to the old multiple-choice format, including questions with multiple answers.