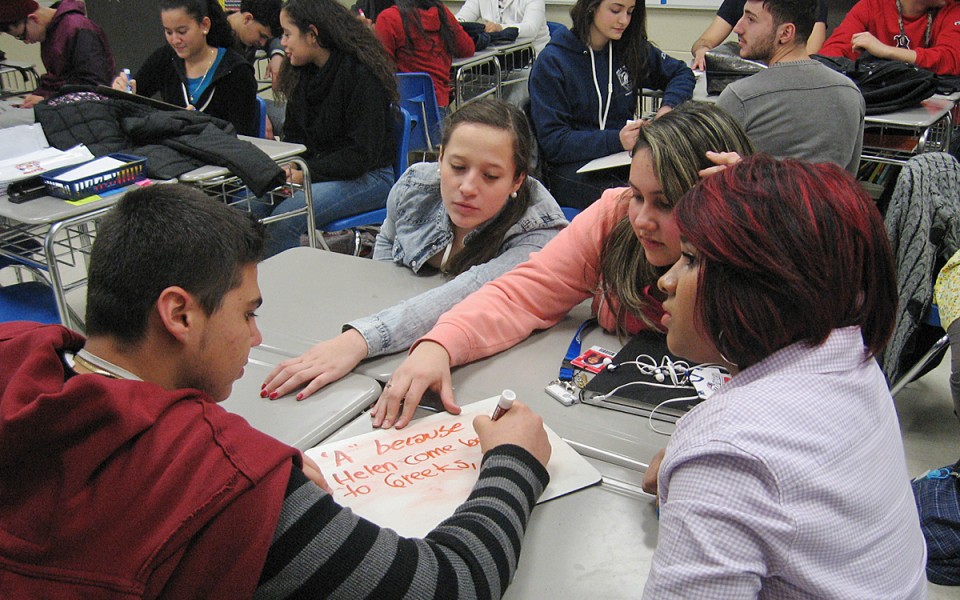 REVERE, Mass. — In the minutes between class periods, Revere High School’s halls flood with students. The local diversity in this eastern Massachusetts town shows quickly. While teachers call out with Boston-area accents, fewer students do. Arabic speakers make up a large minority of the student population and hijabs are not uncommon headwear in the hallways. Latinos, the majority ethnic group at Revere, include a number of recent arrivals from places like El Salvador and Colombia.

In between February blizzards, 11th-grader Amina Mansouri, 16, and her classmate Chaimae Hartout, 17, spread out their iPads and notebooks in the school library to work on a world history project. They paused to discuss some disheartening news: Their teachers had just reminded them they will soon be taking a new state exam tied to the Common Core, a set of standards adopted by more than 40 states in 2010. Ten other states and Washington, D.C., will be giving the same exam, meaning that for the first time, Revere students will be compared with peers not just across the state, but across the country.

Chaimae complained how unfair it is to be “guinea pigs” for the new test, but Amina wasn’t as worried. This year, at least, the school won’t factor test scores into students’ GPAs and the state will hold off on requiring a passing score to graduate. But switching to an online test from the old paper-and-pencil exams did give her pause.

“I’m just afraid the online is going to affect the grades,” Amina said.

Related: What this spring’s Common Core tests promised, and what they will actually deliver

There’s virtually no doubt that will be the case. Scores are likely to plummet, not only because the test is online and students will have to adjust to the technology demands, but also because it will be harder — and unfamiliar. In districts like Amina’s, where 79 percent of students come from low-income families and 16 percent are still learning English, the portion of students earning proficient scores will probably shrink more than in wealthy districts. Historically that has been the case after the switch to new tests, no matter how difficult they are, revealing an important difference between extensive test prep and true learning.

The Common Core was rolled out with the promise of raising expectations for American students and closing both the persistent learning gap and the achievement gap, as measured by test scores. But in the short term, at least, the achievement gap will almost certainly grow wider.

The divergence in scores between disadvantaged students and their peers has already ballooned in Illinois, New York and Kentucky, which launched early versions of more rigorous Common Core exams. In Illinois, for example, the achievement gap between low-income students and their wealthier counterparts increased by 94 percent the year the state introduced a more rigorous math test tied to the Common Core. Among third-graders in Kentucky, a 16-point proficiency gap between students with limited English and all students increased to a 21-point spread when a more rigorous reading test debuted in 2012.

And none of those tests were taken on computers. Schools across the country have been scrambling to help prepare disadvantaged students, who may have less experience with technology, for the new online formats.

In the long run, though, test-makers argue that the Common Core tests will do more to level the playing field than the exams that came before them. When it comes to achievement, creators have capitalized on the computer-based format of the new tests to incorporate a host of extra tools students can use to perform at their best. For non-native English speakers and students with special needs, especially, these new features may help them display knowledge they’ve always had but haven’t been able to prove.

In terms of learning, these tests are supposed to be less vulnerable to prepping and tricks, forcing schools to do more to make sure students truly master the material. If that proves true, these tests should narrow the country’s educational inequities — including gaps in college access, remediation rates and graduation rates.

That’s the hope, at least.

Sonja Brookins Santelises is vice president of K-12 policy and practice at The Education Trust, an advocacy group focused on the achievement gap. She said data from the early Common Core tests, which include fewer multiple-choice questions and more open-ended responses and multi-step math problems, suggests schools had the wrong targets for certain groups of students from the beginning.

In Illinois the achievement gap between low-income students and their wealthier counterparts increased by 94 percent the year the state introduced a more rigorous math test tied to the Common Core.

“We were clearly educating some kids to only be able to fill in the bubbles while we were educating other children to be able to write coherent, argumentative text,” Brookins Santelises said. Advocates hope the Common Core will change that, raising expectations and outcomes for all students.

The federal government sponsored the creation of the two main Common Core tests, which were developed by two groups of states. Massachusetts, along with 10 other states and Washington, D.C., will take versions of a test created by the Partnership for Assessment of Readiness for College and Careers (PARCC). Eighteen states will take a test created by the Smarter Balanced Assessment Consortium. Both groups actively committed to making tests that are more accessible to students with special needs, including those who have language barriers.

By law, students identified as having special needs get certain accommodations during classroom instruction and test-taking. For most previous state tests, accommodations like getting directions read out loud had to be agreed upon by the student’s parents and school support personnel ahead of time.

Now, on the math portion of the PARCC test, all students will be able to have text read aloud to them through their computers, if they choose. On-screen guides will help students focus on certain sections of text at a time. Clickable glossaries will also be made available to students still learning English. And for Spanish speakers, at least, it will be possible to take the entire math test in their native language.

The Smarter Balanced assessment has similar tools, including a read-aloud option, on-screen highlighters, glossaries and access to a digital notepad. Experts expect students who may have been embarrassed to be seen using similar resources on paper-and-pencil tests will feel less constrained with the greater privacy of working on their own computers.

Magda Chia is the director of support for under-represented students at Smarter Balanced. She said students who don’t get enough to eat, have been instructed by a substitute teacher for half the year or attend schools with fewer academic opportunities come to the test with disadvantages.

“We can’t mitigate all of that,” Chia said. “There are systemic social inequalities that contribute toward the achievement gap that has been present in pretty much every test that has ever been given in this country.” The new tests, though, can decrease the obstacles some students face, Chia said. Research commissioned by Smarter Balanced showed that most of the new tools will give a boost to students who use them.

The Education Trust’s Brookins Santelises said some of her colleagues believe the accommodations alone are worth the price of administering the new tests.

But even if the new exams are an improvement over their predecessors, critics still find reasons to be skeptical about how much they’ll help close the learning gap. Harvard professor Daniel Koretz has studied the introduction of new tests in various states and finds that score gaps tend to shrink on tests that are used for high-stakes purposes much more than they shrink on other exams students take. Because the Common Core tests eventually will factor into staffing decisions in many states and, in some cases, graduation requirements, they will be equally susceptible to the score inflation Koretz has found in response to other high-stakes, statewide exams. This would, again, create a learning gap that could lurk until the next switch to new tests.

Many supporters of PARCC and Smarter Balanced point to the new tests as an improvement because their content is better. Koretz, though, said the problem with standardized tests, and the basis for score inflation, is not bad content but predictable content.

“I’ve looked over and over again to see whether the consortia are discussing ways of making tests substantially less predictable and I just haven’t seen it,” Koretz said.

He does believe some portion of the hoped-for score improvement in years to come will be because kids truly are mastering more complex topics. But as educators become more familiar with the new tests, schools may again begin to use intensive test prep to manufacture passing scores that don’t say much about student learning, Koretz said.

Robert Schaeffer is the public education director of FairTest, an advocacy group that fights high-stakes testing. He, like Koretz, doesn’t expect the new exams to tell us much more about student achievement. “The only winners in that process are the people who make the exams and the technologies and the products that support them,” Schaeffer said.

At Revere High School, educators are optimistic, however. In Massachusetts, districts had a choice this year between keeping the old, paper-and-pencil exam and switching to the PARCC test, which all schools are required to administer next year. While many districts in high-poverty neighborhoods chose to stick with the paper-and-pencil format, Revere’s Principal Lourenco Garcia embraced the inevitable, unruffled by the predicted drop in test scores.

“We were clearly educating some kids to only be able to fill in the bubbles while we were educating other children to be able to write coherent, argumentative text.”

If the barometer for measuring student proficiency will eventually be the new test, Garcia reasoned, his students should get a foot in the door.

“Even if they’re not successful, at least they have the exposure,” Garcia said. “This is the time to set the foundation for what is coming down the road.”

Revere Superintendent Paul Dakin likened the whole process to athletics. College football stars are big fish in small ponds, excelling at the test in front of them — performing well against their peers. When those college stars go pro, the test changes and becomes significantly harder — they are competing on a different level.

There’s no denying the Common Core State Standards — and the tests that go with them — are more rigorous, Dakin said. But, ultimately, if they’re better able to prepare students for the world in which they will be expected to compete, he believes it’s time to coach up.

This story was produced by The Hechinger Report, a nonprofit, independent news organization focused on inequality and innovation in education. Read more about the Common Core.

Tara García Mathewson is a staff writer. She launched her journalism career with two award-winning pieces co-produced during a three-month stint at the Kitsap Sun… See Archive