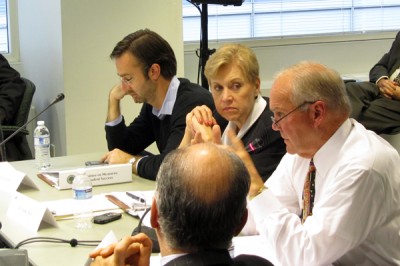 Scorned for the abysmally low number of their students who earn degrees, the nation’s community colleges may be about to more than double their graduation rates—not by turning out a single additional graduate, but by changing the way the rates are calculated.

The move comes two and a half years after President Barack Obama called for community colleges to produce an additional five million degree-holders by 2020.

The paperwork change, recommended by an advisory committee to the U.S. Department of Education, would revise the formula for determining community-college graduation rates to include the large number of students who transfer to other schools after having completed at least 30 credits at a community college.

The new completion rate would also count students who take up to four years, rather than the current three, to finish their two-year degrees. It is not clear how much further that would raise the completion figures.

A formal announcement about the proposal is scheduled for this month, though officials are already meeting to work out the technical details.

Critics say community colleges should be spending their time helping students graduate, not altering the rules by which their performance is measured.

“It doesn’t change the fact that a significant number of students do come to community colleges to earn a degree, but don’t,” said Stan Jones, a former Indiana commissioner of higher education and president of Complete College America, which is pushing to increase the number of Americans with such credentials.

“I would rather see people focusing on improving the graduation rates than trying to defend or reconstruct them,” Jones said.

Changing the graduation-rate calculations won’t make any difference at all in the proportion of Americans aged 25-34 who have degrees, which is also a priority of the Lumina Foundation for Education, said its president, Jamie Merisotis. The United States ranks 16th in the world by this measure, according to data from the Organisation for Economic Co-operation and Development. 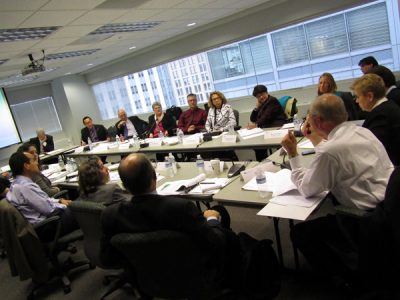 “It’s going to be very important to be clear that this is not suggesting that more students are literally completing college and attaining a credential,” Merisotis said. (The Lumina Foundation is among the funders of The Hechinger Report, which produced this story.)

But Merisotis said he’s sympathetic to community colleges’ argument that the nontraditional backgrounds of their students—85 percent of whom work full time, almost a third of whom are balancing their educations with family obligations, and some of whom plan to transfer to other two- or four-year institutions—make the current formula for calculating graduation rates unfair.

Counting only the number of students who graduate within two years “creates a problem in terms of our ability to understand who is actually being successful” by, for example, transferring to a four-year college or university and getting a bachelor’s degree, Merisotis said.

Wayne Burton, president of North Shore Community College in Massachusetts and a member of the advisory committee, said very low graduation rates have made community colleges “into a punch line, and that just infuriates me. It’s usually used as a metaphor for somebody that’s not very smart. You can’t understand how deeply hurtful this statistic has been to our schools.”

Considering how many community-college students, compared to students in other kinds of higher-education institutions, are nonwhite—36 percent overall, and many more on some campuses—using the low graduation rate “is almost racist,” Burton said.

He acknowledged that the Obama administration’s focus on community colleges has intensified this scrutiny.

“The hardest thing we’ve had to do is describe a community college to a country that’s never cared before, as institutions with incredibly diverse student bodies and diverse missions for students with diverse goals that are not reflected in the current calculations,” Burton said.

The new formula, he said, “will just acknowledge that students succeed here in different ways.”

Counting students as having successfully completed a community college if they accumulate 30 or more credits before transferring would be tracked through the National Student Clearinghouse, a little-known nonprofit organization that monitors the registration status of every student in America as well as how much money he or she borrows toward educational costs.

“If you consider transfer to be a successful outcome—and many community-college people say their job is to get the student into the four-year college—then the graduation rate has to rise,” said Thomas Bailey, director of the Community College Research Center at Teachers College, Columbia University, and the advisory committee’s chairman.

“Let’s look at it this way,” Bailey said. “The graduation rate as it stands now is easy to dismiss—meaningless. So whatever it is, as far as that’s concerned, you don’t have a graduation rate.”

Changing the math, he said, doesn’t let community colleges off the hook for completion rates that will still be lower than 50 percent.

“I don’t want to say, ‘Oh my God, community colleges have improved—they’ve gone from 20 percent to 40 percent in the last year,’ ” said Bailey. “That’s ridiculous.”

Even if the overall community-college graduation rate hits 40 percent, he said, that still means three out of every five students are failing to graduate.

“Will we say that’s a good number,” Bailey asked, “and we can all go home now?”

This story also appeared on the College, Inc. blog of The Washington Post on March 8, 2012.