WASHINGTON, DC – New research unveiled here has exposed an exception to the higher-education mantra that people with degrees earn more than people without them.

The research, conducted under the aegis of the Center for Analysis of Postsecondary Education and Employment and focused on community colleges, confirms the widely accepted belief that many graduates make more than people without degrees.

But it also found that the large proportion of community-college students who major in the liberal arts, humanities, and general studies and have not gone on to earn bachelor’s degrees receive little or no financial advantage at all in exchange for their time and tuition. Nor do recipients of many newly trendy professional certificates.

RELATED: The ‘cash cow’ of U.S. universities: Professional certificates instead of degrees

Researchers speculated that students at community colleges may end up in the liberal arts because there’s not enough room in nursing or technical programs, or because they’re not aware of the earnings implications.

There are limitations to the data. For example, it doesn’t track whether those humanities majors ultimately transfer to four-year universities and colleges and boost their income by earning bachelor’s degrees. And because of differences in the way higher education and earnings information is tracked, there are variations in the way the research was conducted in various states.

In Florida, however, where researchers followed students from the eighth grade through the end of their educations, 55 percent of those who went to community colleges ended up in liberal-arts or general-studies programs, which also have among the lowest graduation rates and lowest earnings. 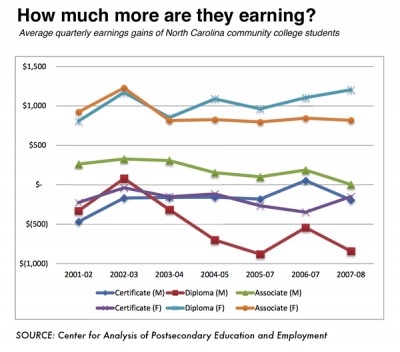 The results are likely to turbo-charge the ongoing debate about whether the purpose of a higher education is to impart knowledge or vocational skills.

In Michigan, 40 percent of students at community colleges took liberal arts courses, and their degrees gave them no income advantage at all over classmates who enrolled but never graduated.

Researchers speculated that the difference between what men and women earned stemmed from the fact that women were more likely to go into nursing and other health fields, which pay more than other careers.