The state is 48th in an annual ranking of U.S. education performance. Mississippi spends less on education than nearly every other state. Just 61 percent of Mississippi’s students graduate from high school on time—more than 10 percentage points below the national average.

All too often, the children of this state start behind and stay behind.

So what does Mississippi Gov. Phil Bryant do when given a microphone at a Washington Post public forum earlier this week? Asked how America became “so mediocre” in its educational outcomes, he noted that both parents started working, and “the mom is in the workplace.”

The Republican governor knew he had put his foot in his mouth.

“I can just see the emails now,” Bryant said as soon as the words were out of his mouth.

Bryant indeed created a firestorm, but the resulting publicity threatens to take attention away from the very real education problems that plague Mississippi’s children, including a legacy of racism and segregation.

So we can’t help but wonder why Gov. Bryant is talking about women in the workplace instead of focusing on ways to improve public education.

Back at home, his comments have met with some hostility, to say the least.

“Gov. Phil Bryant is a caveman,” noted the Jackson Free Press, in an outraged piece by Oxford mom Cristen Hemmins, who laments that Bryant “makes us look like backwards idiots once again.” 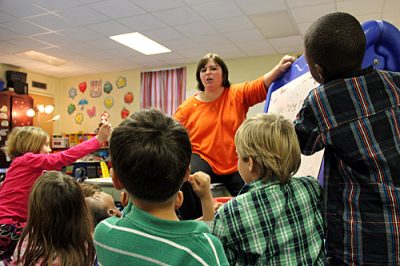 Hemmins included a collection of angry quotations from Mississippi mothers, along with one who had some choice advice for the state’s Republicans.

“Dear Republican Party: You really better get your act together. You are not minting any new Republicans. And, if you want to know why, look at headlines like this one.”

Of course, the state’s Democrats took note. State Democratic Party Chairman Rickey Cole called the comments “an insult” to Mississippi women, and the party used them for Election Day get-out-the-vote tweets, according to Geoff Pender of The Clarion-Ledger.

“[T]o somehow relate public school mediocrity to some ‘Leave it to Beaver’ world that none of us has ever had a connection to in our lives is to ascribe a child-like comprehension to what life is like in Mississippi and has been like. It’s pretty clear our education system has failed Phil Bryant, if no one else,” Cole told Pender.

Republicans and Bryant operatives in turn said the remarks had, of course, been “taken out of context,” and said Bryant was not blaming working mothers. State GOP Chairman Joe Nosef told Pender that the governor “was simply pointing out the positive impact parents can have on the education of their children.”

A Salon editor pointed out that working mothers are not a problem in Finland, a country well known for its education prowess—and where 70 percent of women work.

Bryant has now thrust himself and Mississippi into the national spotlight. Instead of back-tracking or complaining about how his remarks came out, he should take the opportunity to outline a focus on the very real and pressing education problems in his state.

He’ll find they have very little to do with working moms.