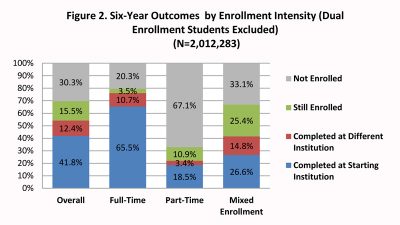 Four and a half years after producing more degree-holders became a national priority, graduation rates remain stubbornly flat, and only slightly more than half of all students continue to finish four-year programs within even six years, according to a new analysis.

The study, by the National Student Clearinghouse, found that the percentage of students who graduated within six years after starting toward either a four-year or a two-year degree is 54.2 percent, up only two-tenths of 1 percent from last year.

Of those, 12.4 percent finished at institutions other than the ones where they started. Another 30 percent of students dropped out, and 15.5 percent were still enrolled.

Though the overall average was virtually unchanged overall, public four-year institutions slightly improved their graduation rate, by 1.3 percentage points, and community colleges by 1.1 percentage points. In all, 37.4 percent of community college students completed school within six years—9 percent of them after transferring to four-year institutions.

Community colleges have long complained that their low graduation rates do not reflect that many of their students transfer and finish elsewhere.