Long-anticipated research into massive open online courses taught by MIT and Harvard finds that, while very few participants complete these classes, many others take advantage of “substantial” amounts of the content. 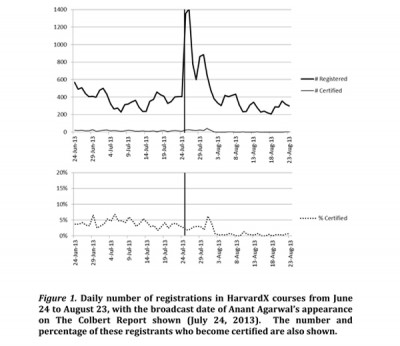 The findings, released by the MIT-Harvard MOOC collaboration called edX, jibe with a University of Pennsylvania Graduate School of Education study that concluded only 4 percent of people who register for MOOCs actually finish them.

In the case of the 17 edX courses analyzed by MIT and Harvard, the proportion of completers was an only slightly better five percent.

But the new research also shows that an additional four percent of those who registered read at least half the content of the online classes, and more than half viewed some smaller amount of it.

“We found students in the courses who engaged with every single piece of the courseware, students who only read text or viewed videos, students who only took assessments or completed problem sets, and students representing nearly every possible combination of these behaviors,” says Isaac Chuang, a professor of electrical engineering and computer science at MIT and one of the report’s authors.

“Experimentation is part of the learning process.” Isaac Chang, MIT

The results suggest that, of the more than 840,000 students in those 17 courses combined, nearly two-thirds got at least something out of the experience, Chuang says.

This means MOOCs still have considerable impact, the report says.

“Experimentation is part of the learning process,” Chuang says.

Focusing on completion rates “limits our imagination of what might be possible with MOOCs,” says another coauthor, Andrew Ho, an associate professor in Harvard’s Graduate School of Education. “A better criterion for success might be for students to complete more of the course than they thought they would, or to learn more than they might have expected.”

The news follows a separate announcement, by the Babson Survey Research Group, that annual increases in enrollment in online courses are slowing after years of heady growth.

The edX study, based on 340 gigabytes of electronic user data along with interviews with faculty and course producers and information provided by students, also found that half of the people who quit MOOCs did so within the first week or two. Attrition fell substantially past that point.

Registration in edX courses spiked when edX President Anant Agarwal appeared on Comedy Central’s The Colbert Report on July 24, with 1,356 people signing up the next day. About 24 of those who registered that day earned certificates of completion.

One-third of its students are men 26 or older with bachelor’s degrees, the study found. Another third have a high-school education or less. Seventy-two percent live outside the United States.