Proponents for giving schools grades say they’re a straight-forward way for parents to evaluate school quality. But a new analysis from the Alliance for Excellent Education reveals that ratings can mask the outcomes for low-performing student groups.

In more than 40 schools in Mississippi that received an A or B rating in 2018-19, students with disabilities performed as poorly, and sometimes even worse, than students, overall, at the state’s lowest-performing schools.

Mississippi identifies schools with underperforming subgroups as part of the state’s accountability plan under the federal Every Student Succeeds Act. But it uses a different system for the school ratings it assigns schools each fall. For these, Mississippi factors in the overall percentage of students scoring proficient or above on state tests and whether their scores increased compared to the previous year. Schools receive additional points based on the improvement shown by students who scored in the bottom 25 percent at their school. When students make significant progress from one year to the next, even if they do not achieve proficiency, the school will receive extra points that may result in a higher rating.

Related: How Mississippi’s districts are separated into have and have-nots

Lindsay Dworkin, who oversees policy development at the Alliance, said the state’s method can send “inconsistent signals” to parents. “It’s confusing to have the state saying, ‘On one hand it’s an A school; on the other hand, there are these huge issues with gaps and proficiency rates are low,’” she explained. “Which of these narratives are parents supposed to believe?”

Dworkin’s colleague, Anne Hyslop, said Mississippi’s next-door neighbor, Louisiana, has taken a step toward more transparency: Schools in the Pelican State can’t receive an A rating if they have a consistently underperforming student subgroup.

Alan Burrow, the Mississippi Department of Education’s executive director of district and school performance, said incorporating the academic progress of the lowest performing quartile of students in state ratings has paid off.

“Since implementing the inclusion of the lowest 25 percent indicator, Mississippi has shown significant gains as evident in our 2019 National Assessment of Educational Progress results,” he said in a statement. “The 2019 NAEP results show that African-American, white and Hispanic students from low-income homes in Mississippi achieved higher scores than their peers nationally in all four NAEP subjects.”

Here are a few more takeaways from Alliance’s Mississippi snapshot:

Dworkin said schools are more likely to be identified by the state as needing additional assistance and support to lift the performance of students with disabilities because student proficiency in this group is the farthest from meeting the state’s proficiency goal for all of its student subgroups. To make sure other students aren’t being shortchanged, though, Hyslop said the state could create separate lists to track proficiency gaps for each student subgroup to make sure support is going where it’s needed. Schools with large proficiency gaps in any subgroup — students from low-income families, English language learners, etc. — would then be targeted for additional support.

This story about school ratings was produced by The Hechinger Report, a nonprofit, independent news organization focused on inequality and innovation in education. Sign up for Hechinger’s newsletter. 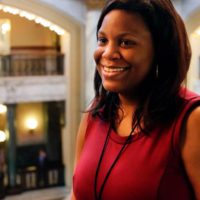