The more teachers get to know the controversial Common Core State Standards, the more they like them, according to a teacher survey published this week. And even as many states debate whether to stick with the standards, which lay out what students need to know in math and English based on requirements in other countries, the survey suggests that the Common Core is already being taught at most schools in the 45 states that adopted it.

The survey is one of two reports published this week that goes beyond the fights over whether to throw out or slow down Common Core to find out how local school districts and classroom teachers are dealing with the standards in their classrooms. The findings—both reports are published by staunch supporters of the Common Core—were largely positive.

But the feedback from teachers and districts also uncovers anxiety about how classrooms and students will be affected by the tougher standards. Teachers are still worried about how to help struggling students keep up, while districts that adopted the standards early have resorted to coming up with their own curricula to meet the standards because they’ve found few off-the-shelf materials that do a good job of matching Common Core.

And training teachers to be able to handle the Common Core remains a major concern. As one teacher in Washington told researchers: “I feel that my ability to be the best teacher possible for my students is most critically affected by the lack of professional time to adjust the curriculum to the Common Core.”

The first report, published Tuesday by Scholastic and the Bill & Melinda Gates Foundation (Gates is among Hechinger’s many funders), surveyed 20,000 American teachers last July about a range of topics, including the Common Core. The second report, published Wednesday by the right-leaning Fordham Institute, examines how four local school districts that launched Common Core early have fared and highlights best practices.

Here are some of the main takeaways about how teachers are reacting to Common Core from the Scholastic and Gates survey: 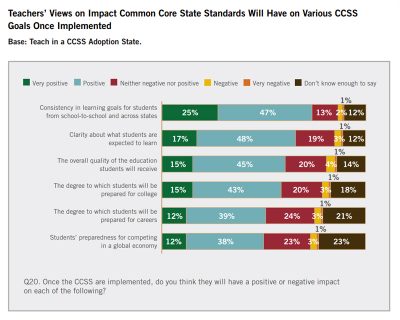 What to do about the lingering worries? The Fordham report highlighted best practices being used by the early adopters of the Common Core that might be helpful for others who are further behind. (The districts were Nashville, Tenn., District 54 in Shaumburg, Ill., in the Chicago suburbs, Kenton County School District in Northern Kentucky, and Washoe County School District in Nevada, which encompasses the Reno-Tahoe area.) Here are outtakes:

The four districts didn’t have all the answers for making the transition to Common Core a smooth one, though. As one Nashville educator put it, “All our teachers feel like they’re first-year teachers right now.”